In Genesis 6, we read about the giants (the Hebrew word is “Nephilim”) that were in the world.  I thought of the Nephilim recently when we had a visit from our good friend Ray Comfort, head of Living Waters Ministries.

As I wrote last week on this blog, I was privileged to speak at the “Deeper Conference” here in northern Kentucky. Actor Kirk Cameron was one of the speakers, along with Todd Friel of “Wretched Radio” and Ray Comfort of Living Waters Ministries (plus other speakers).

Now, Ray is a “Kiwi” (meaning a person from New Zealand). Australians like me sometimes have a little fun at the expense of Kiwis (all good-natured, of course).

Ray visited the Creation Museum when he was in town, and we decided to have some fun with him. Here he is with two of our staff members, Tim Chaffey (6’9”) and Roger Patterson (6’7”), and we joked with Ray about adding him to our staff basketball team. He was a good sport about it.  I’m sure you can see why I thought of the word Nephilim! 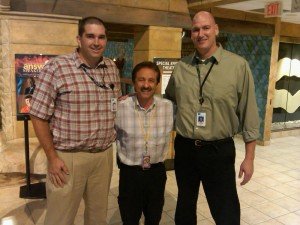 Best Decision We Could Have Made

You will be thrilled at this feedback about AiG’s Vacation Bible School (VBS) program:

I wanted to let you know that our youth group used the AiG VBS program [Operation Space] this year and it was amazing.  We took the program with us to a Navajo Reservation in [Arizona], and at the time we were unsure how it would work with a different people group, but it ended up being the best decision we could have made.

Many of the children had no idea who Adam and Eve were, and the lessons, combined with the crafts and the small groups, allowed us to teach the children about the authority of God’s word from the beginning to the end.

Having grown up in a church-going family, I have to say that this is the best VBS program that I have been a part of, worked in, or ran.  I would HIGHLY recommend AiG’s VBS program to any church leader whether it is for their own VBS or for a missions trip.  Thank you for putting out such an excellent program. You can find out more about AiG’s 2011 VBS program on this website.

I have not spoken in secret

(Isaiah 48:16)  Come you near unto me, hear you this; I have not spoken in secret from the beginning; from the time that it was, there am I: and now the Lord GOD, and his Spirit, has sent me.

The Lord Jesus Christ is the Jehovah and Adonai of the Old Testament, but when the Father and Spirit sent Him to earth, He became a man to die for sins. Thanks for stopping by and thanks for praying,