While I was out on speaking ministry in New York State earlier this week, one of our AiG supporters came by our Creation Museum to drop off a very unusual and thought-provoking photo of New York City. Ed Van Dongen, a retired teacher from Michigan visited New York City in 2001, a few weeks before the Twin Towers were brought down by terrorists using hijacked planes as bombs. 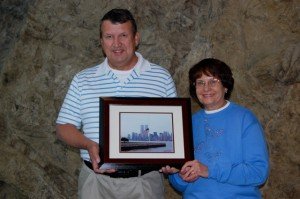 The photo that Ed and his wife Sue are holding in the photo above was taken by Ed in 2000 very near the Statue of Liberty—from a ferry boat heading to Liberty Island, where the Statue stands. As he took the photo of the skyline of Manhattan, he wondered why the flag was at half mast, and so he asked one of the park rangers about it (the Statue of Liberty is considered a U.S. national park). The ranger indicated that a plane had crashed near Mount McKinley in Alaska, leading to the deaths of some national park employees, and so flags were being flown at half-mast in all the national parks throughout America. Little did Ed know that his photo would have some poignancy just over a year later on September 11, 2001. When Ed asked the park ranger when the flag would go back to full staff, he replied “the next day.” Ed told us that “God put me in the right position at the right moment to get the photo.”

The date of 9/11 stands out for me not only because of the obvious (it’s one of the worst tragedies ever to hit the United States), but for another reason. I remember that just after I watched the second plane hit one of the Twin Towers on 9/11/01, I called the AiG office and said that I would be working on a commentary for our website that would help explain why horrible things—like terrorist acts—happen in a world where we believe God is in control. Within hours, we had a commentary posted to our website on the question of suffering, death, and a loving God. It was such a lengthy article, that we eventually turned it into a witnessing booklet—which we sell today, nine years later, entitled “Why is there Death & Suffering?”

By the way, here is a link to an excellent article written by Dr. Tommy Mitchell of our staff (he’s a medical doctor who has seen many people suffer from accidents and health problems, and he has seen some deaths over the years). The article helps explain why we see death and suffering in this world. It’s actually a chapter from our New Answers Book 1.

If you would like to order the witnessing booklet that came out of the 9/11 tragedy in 2001, you can go to our web bookstore at AnswersInGenesis.org/PublicStore/product/Why-Is-There-Death-Suffering,4240,228.aspx

This question of death occurring in God’s creation popped up in my mind again recently, as I leaned that a dear friend and ministry colleague, Neal Brewer, passed away suddenly. Thankfully, his widow, Debbie, while grief-stricken, knows that in a fallen world, tragic things will happen, and she also realizes that her husband is in a far better place. See my blog posting about my good friend Neal at: AnswersInGenesis.org/articles/2010/09/29/in-memoriam

Today, I will be speaking at the memorial service in Georgia for my dear friend and colleague, Neal Brewer. Please pray for his widow, Debbie. She has asked me to summarize what’s in our death and suffering booklet for those at the service.