Our good friend Dr. Ron Reese of Virginia saw his letter to the editor printed in the Washington Times on Friday. (He has sponsored AiG speakers in the Washington, D.C., area, and also went on one of our raft trips through the Grand Canyon earlier this year.)  Here is the link to his letter: http://www.washingtontimes.com/news/2010/aug/26/evolution-uses-lack-of-evidence-as-proof/

Ron has a PhD from prestigious M.I.T. (his doctoral thesis was on ship propulsion for a 20,000-foot-deep submersible), and it’s great to have professionals like him who are standing up for biblical truths in the nation’s capitol by writing pieces like this. By the way, he is helping to gather a group of volunteers in the Washington, D.C., area to host another AiG seminar in the region.

40 Days (And Nights) of Prayer

The National Religious Broadcasters (located in the Washington, D.C., area) represents ministries all across America with major media outreaches, including AiG and our radio, TV, magazine (Answers), and web presence. The NRB has issued an urgent call for prayer, and so starting Wednesday, ministries affiliated with the NRB will be calling on their viewers, listeners, and readers to commit to 40 days of intercessory prayer for America.

As I have written many times before in this blog post, we now live in a post-Christian nation. However, churches, with God’s blessing, can make a difference.  God can change the nation as He blesses Bible-upholding ministries that are faithful to His Word. So NRB is calling Christians across our nation to a single focus of prayer—with no political agenda.

Two influential Christian broadcasters—Dick Bott, head of the Bott Radio Network, and Bill Skelton, chairman of the board for the NRB—are leading this prayer effort; they are friends of the AiG ministry, and have toured our Creation Museum. See their article on the 40 Days of Prayer at this link: http://nrb.org/mediacenter/chairman_s_page/if-my-peoplethe-complete-story/

Bill and his wife Barbara are seen in this photo taken inside the museum about two weeks ago: 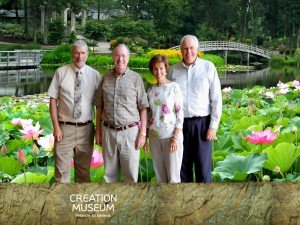 You can check that NRB website for daily prayer requests.

Take heed to yourself that you be not snared

(Deuteronomy 12:30)  Take heed to yourself that you be not snared by following them, after that they will be destroyed from before you; and that you enquire not after their gods, saying, How did these nations serve their gods? even so will I do likewise.

Evil is a luring trap that entices by curiosity to know more; evil is to be recognized and shunned, not studied to understand the details of how men are involved in it. Thanks for stopping by and thanks for praying,