The Most Popular Creation-based Magazine in the World 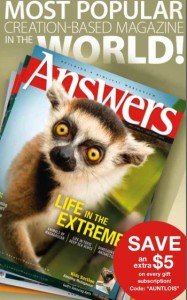 With over 72,000 subscriptions (and subscribers from 120 countries)—with a digital version—a special website with extra articles and many other features plus a mini magazine for children, and a special kids website, there is no other creation-based (and Christian worldview) magazine like this in the world.  Even in this shaky economy, subscriptions continue to climb, the emails applauding the magazine keep coming in, and more and more of our excited subscribers are giving gift subscriptions to their friends and close relatives—and their pastors.

Right now, we have a very special program that has already proved to be very popular—in fact so popular we have decided to extend it for a while.  For every gift subscription you give to someone, you can deduct $5 off the subscription price—you can do this online as per the instructions given when you use the link below.

AND ...  If you are giving a gift subscription with this special offer, you can also renew your own subscription and get $5 off that, too, by calling customer service and doing this over the phone: 1 800 778 3390.

As you are contemplating this, consider how this special offer came about as a result of “Aunt Lois.”

Here’s a true story about a 9-year-old boy, and a very ordinary aunt who did something “small” that helped inspire that boy to get really serious about his beliefs. Ultimately he helped impact tens of thousands of people.

Dale Mason, who serves as one of our VPs and publisher of Answers magazine, was that boy. He thinks it was in 1969—when he was intensely following America’s space race to the moon—that his Aunt Lois gave Dale’s family a gift subscription to a popular magazine that was mainly about science. He wasn’t much of a reader at the time, but he says that “the amazing things that were covered in that magazine and the incredible pictures grabbed my attention every time a new issue arrived in the mailbox. I became much more of a reader and I almost immediately began interacting with adults and older kids on subjects we were all surprised by. It stretched me in ways I really enjoyed.”

But the magazine was full of evolution, too, and when it told about jungle natives or far away planets, the articles were always full of evolution-based ideas. “Thankfully, when I was in high school my church offered a Sunday school class about origins—creation vs. evolution. God used that class to excite me about the truth of Genesis, and all of the Bible.” But his memory of the strong influence of the science magazine has always stayed with him. “I’d shown evolution articles to my friends and I guess I was something of a young evolution evangelist for a while there.”

Many years later, while here at AiG, God used that memory to inspire him. A short time after we decided to begin publishing Answers magazine and I asked him to lead the team that would eventually launch it, Dale thought back to what an incredible impact a simple gift subscription to a secular science magazine had on his life.

Several weeks ago, while visiting his childhood hometown, he enjoyed a talk with his now elderly Aunt Lois. After that visit, “I got to wondering what it would be like if thousands of aunts and uncles and grandparents would simply do what my Aunt Lois did, but with Answers magazine rather than an evolution-laced publication.”

Dale and his magazine team have launched something they’re calling the “Aunt Lois” gift subscription campaign, and we are hoping that God will embolden you to give some subscriptions yourself! To help you, we’re even offering these at an extra $5 savings. That’s really special!

Simply go to www.AnswersMagazine.com/subscribe and scroll down to the Subscription Options section. Check the box “Make this a gift subscription” and insert “AUNTLOIS” as your coupon code during checkout. The magazine team will see that you get an extra $5 off every subscription you give.

Write down the names of several people you would like to impact. Like Dale’s “ordinary” aunt, you really can make a big, lasting, high-impact difference in the life of a loved one and their family! (By the way, if you’ve just received your new issue of Answers magazine, you can use the special form that we printed on the inside front cover and mail or phone that info to us.)

As you know, the quality of Answers magazine and all the extras that go with it are unsurpassed with this type of apologetics magazine—and Answers is an award-winning magazine!

How I praise the Lord for the quality artists, graphic designers, writers, and others who make Answers the most popular and highest quality creation-based magazine in the world!

Many people subscribe to both the print version of  Answers as well as the digital version, but the digital edition is especially great for people from other countries as they can subscribe at an inexpensive price and not have to worry about paying the extra postage—and yet they get an edition that is just like the print version—you turn the pages just like you do with the printed magazine.  Many people in my homeland of Australia subscribe to the digital edition for instance (but many also subscribe to the print edition)—and word is spreading as it is in many other countries.   For more information go to:  http://www.answersingenesisorg/dsm/

Here is a photograph from our recent Defending the Faith conference in Tennessee, taken while I was speaking and stating that we need to start a new reformation in the churches to get away from the compromise in Genesis that is so prevalent, and get back to the authority of the Scriptures: 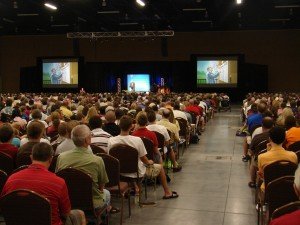 Previous Article They Came from All Over Next Article How Many Thousands Heard AiG Teaching This Past Week?