Happy Birthday to the Creation Museum!

Today marks another milestone in the history of the Creation Museum—it’s our third birthday today.

The museum has drawn many more visitors than what we expected three years ago when we opened the doors. Here is a slightly adapted version of a news release we sent out this morning to the national media to announce God’s blessings on the museum. Back on May 28, 2007, we thought it might take five years to reach one million visitors.

Over 1 Million Visitors in 3 Years

PETERSBURG, KY, May 28, 2010 – Staff at the Creation Museum in Petersburg, KY, got their Memorial Day weekend off to a rousing start with today’s third anniversary celebration and dedication of the new “Kneehigh” children’s exhibits (with more kid-friendly exhibits to come in the museum’s fourth year). 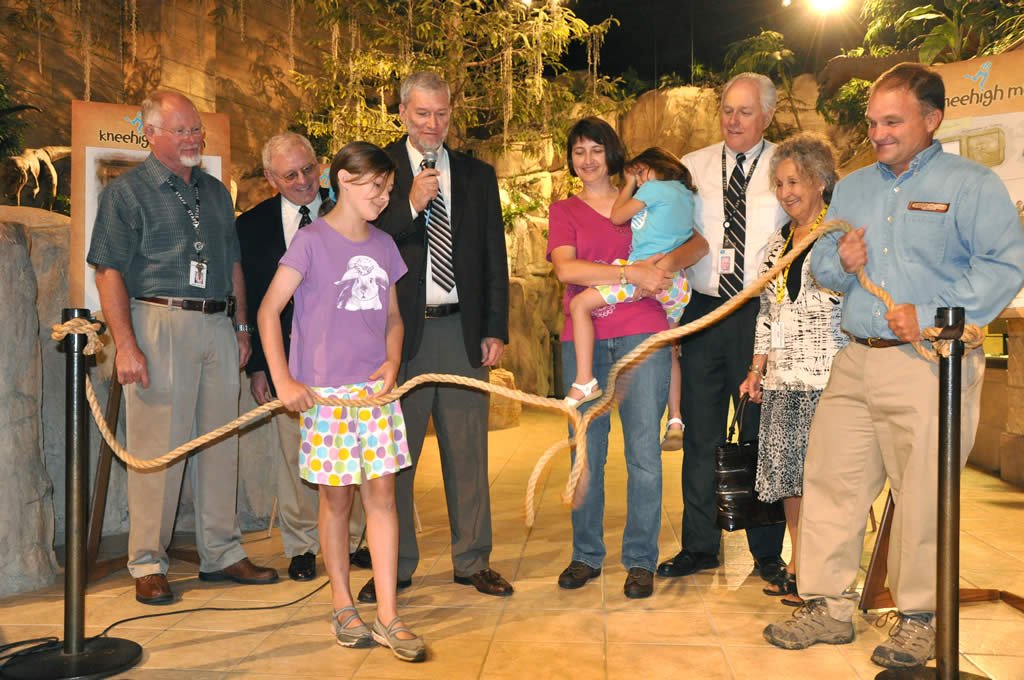 “We are excited to have a two-fold reason to celebrate today,” museum founder and Answers in Genesis president Ken Ham said. “We are grateful to have successfully reached our third anniversary and have continued to see strong attendance—over one million guests since May 2007. We are also pleased to introduce wonderful new interactive children’s exhibits. They help to further the museum’s purpose of upholding the truth of God’s Word from the very first verse. Our staff artists have done a great job.”

The idea for the Kneehigh children’s exhibits was inspired by that desire for both adults and children to learn the truth about biblical history as well as defend their faith in today’s culture. However, museum staff observed that parents weren’t able to fully explore the exhibits before their children were ready to move to the next room.

Hence, museum designers planned even more child-friendly, interactive additions to existing displays, built at a “knee-high” level for children, so that they could be as fully engaged and learn just as much as their parents. Altogether, the first phase of the Kneehigh museum includes 21 interactive/hands-on exhibits spread through 9 of the museum’s exhibit areas, with three other phases of exhibit additions planned for the future, as time and funding allow.

Some examples of the new exhibits include The Dig Site room additions, where children can touch a real dinosaur bone (a hadrosaur tibia), create a crayon rubbing to see a secret message appear, find partially hidden fossils along the back wall of the room, and more. Nearby in Critter Canyon, brightly colored handprints invite children to investigate some of the types of wildlife found in the Grand Canyon.

The Voyage of the Ark Room boasts perhaps the most exciting interactive exhibit for children (and adults). A life-like Noah is sitting at his desk, ready to answer questions about the Flood. Children choose a question on a monitor and see the animatronic Noah come to life. Animatronic animals are featured next to him (a realistic raven and a dove),with information on how Noah could care for the animals inside the Ark. In other places, special touch-screen computers will enable children to play games, arrange the 7 C’s of History, build the Ark, and so on.

The Randall Gabrell family of Oklahoma, one of the families that helped contribute funds to design and build the Kneehigh exhibits, formally opened the exhibits this morning.

In addition to the Kneehigh museum exhibits, other recent improvements at the popular museum include an equipment upgrade at the planetarium, where after three years the projectors were reaching the end of their life because of constant use over several thousand shows. The museum was able to employ a new technology that makes the planetarium programs much brighter and the colors more vivid.

Volunteers and AiG staff have also recently finished the refurbishing of Noah’s Café inside the museum. Renovations include increased seating capacity to over 200 (plus additional seating on the deck overlooking the lake) and a more efficient re-design of the food ordering and delivery process, which includes updated computer technology.

The high-tech Creation Museum first opened to international acclaim on Memorial Day, 2007, and has continued to draw steady crowds averaging more than 300,000 each year. The museum celebrated its one millionth guest a month ago on April 26. As a biblical apologetics ministry, AiG’s other outreaches include more than 250 teaching meetings each year, an award-winning Web site, and the “Answers” radio program heard on more than 800 stations throughout the United States. For more information, see our newsroom.

Tomorrow on this blog, we’ll show you some photos of many of the new exhibits and photos of today’s dedication ceremony.

Monday is the last day for your pastor to register and get a discount for our September “Answers for Pastors” conference here in our Cincinnati/northern Kentucky area. After May 31, the registration price increases.

As you go the conference website at www.AnswersForPastors.org, note that pastors’ wives can attend at a special discount. Also, included in the registration is a free ticket to visit the Creation Museum—about 15 minutes from the conference site. Share this web link—www.AnswersForPastors.org—with your pastor and encourage him to get some great Bible teaching and to tour the Creation Museum.

So shall we be separated

(Exodus 33:16) For wherein shall it be known here that I and your people have found grace in your sight? is it not in that you go with us? so shall we be separated, I and your people, from all the people that are upon the face of the earth.

The presence of the Lord Jesus Christ with us states to the world that we are saved from our sins and it is also what causes us to live a separated life from the world.

Previous Article Why is AiG Relevant? Next Article Creation Celebration!