Whether it is atheist Eugenie Scott (who leads an anti-creation organization called NCSE), PZ Myers (biologist and associate professor at the University of Minnesota–Morris campus), or the author of the book Idiot America, such anti-Christians have mocked the Creation Museum for having a sculpted dinosaur (not an actual exhibit on dinosaurs) with a saddle on it for children to hop on and have their photograph taken. See my previous blog post on this.

Of course, they know that this children’s fun item is not a part of any teaching exhibit—but they are not concerned about truth and representing the museum accurately, only ways they can deliberately distort in order to falsely accuse Christians—after all, these atheists are very defensive of their atheistic position. They can’t tolerate anyone who teaches something opposed to their religion and worldview. They can’t stand the thought of having to be in submission to their Creator.

Recently we read of a park and museum that opened in Poland called Dinozatorland. And guess what they have? A dinosaur with a saddle. In fact, they have at least two dinosaurs with saddles. Look at the second picture in this slideshow from YouTube:

You can also see a picture of one of the dinosaurs with a saddle (and a child in the saddle) in this picture from a magazine article about the park: 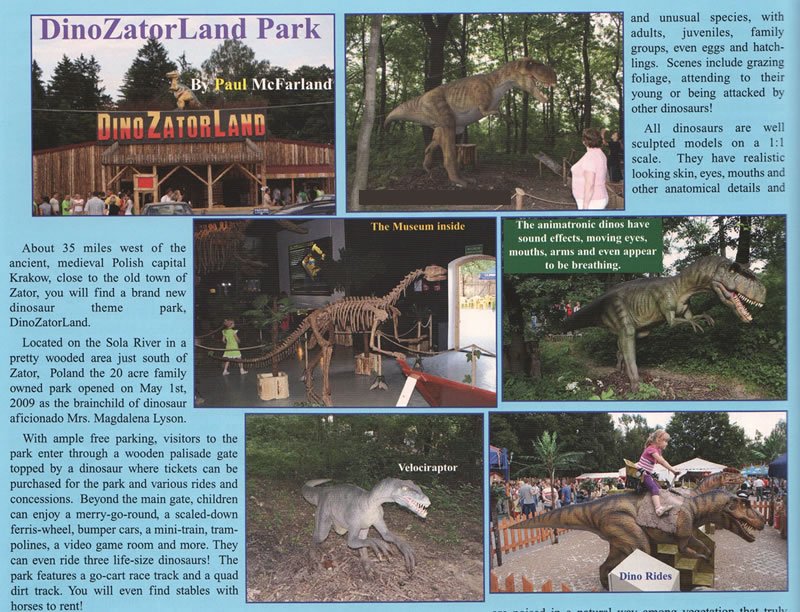 Here is another website article on the park—which discusses its museum and makes it very clear this place does not take a creationist position but teaches millions of years as fact!

Will the atheists now mock this secular museum and park for having a couple of fun dinosaurs with saddles for kids? Then again, it is not a creationist facility; so, maybe they are allowed to do such a thing! It is only Christians who can’t put a saddle on a dinosaur! After all, why should Christians be allowed to do fun things for kids?! Of course, most people (except other atheists it seems) see through this nonsense of the atheists’ baseless mocking of the Creation Museum.

By the way, we do believe that dinosaurs and humans have co-existed; I am only pointing out here how these evolutionists can be inconsistent—and also misrepresent what is in our Creation Museum. The Minnesota professor we mentioned above knows that our saddled dinosaur is in a children’s play area and is not a museum exhibit. Even though there is a sign next to the sculpted dinosaur that says it is only for children to get on (“wear and tear” is lessened that way), this atheist professor—consistent with his belief that he lives in a universe without purpose and standards of any kind—felt that he could disregard the child-only sign (even after he signed an agreement—drafted by the tour leader of his atheist group—that he would obey the museum’s policies rules).

He wrote the following in an August 2009 blog of his:

Some very persnickety people have been demanding that I apologize for riding a fiberglass dinosaur at the Creation ‘Museum,’ because it had a sign saying it was intended only for those under the age of 12. I’ve thought about it. There is that sign, after all, and if I’d looked a little more carefully, I might have noticed it. But then, I realized that I still would have clambered aboard. There isn’t the slightest twinge of repentance in my heart. I’ll even encourage everyone else to jump on, if you go there—it’s irresistibly ludicrous, and is a good way to thumb your nose at the goofballs running that show.

Did we kick out this uncivil and ill-behaved professor from the museum (he was a distraction to our regular guests) because of his antics and refusal to stick to the agreement he signed? No. We wanted this atheist to be exposed to the biblical teachings—especially the gospel message—found in the museum.

(Jeremiah 31:35–37) Thus says the LORD, which gives the sun for a light by day, and the ordinances of the moon and of the stars for a light by night, which divides the sea when the waves thereof roar; The LORD of hosts is his name: If those ordinances depart from before me, says the LORD, then the seed of Israel also shall cease from being a nation before me for ever. Thus says the LORD; If heaven above can be measured, and the foundations of the earth searched out beneath, I will also cast off all the seed of Israel for all that they have done, says the LORD.

Has Israel provoked the Lord to anger? Yes. When will God cast them off for all they have done? When heaven is measured or never; that is unconditional.