State of the Nation Address—February 16

Following President Obama’s annual “State of the Union” January 27, 2010, I will offer AiG’s “State of the Nation” speech as a live webcast from the Creation Museum on February 16, highlighting how far the U.S. has wandered from its moral foundations and calling Christians back to their biblical roots. The speech will be given in person at the Creation Museum (for an invitation-only live audience) and online via a live webcast, at 8:00 p.m. Eastern, Tuesday, February 16. Those wishing to tune in may do so at www.answerslive.org. Our official press release on this presentation (sent to the national media today) stated:

“Many Christians have been duped into accepting a false idea: that there is a ‘neutral’ position they can take in regard to social issues,” Ham said. “Some Christians even accept the myth that the U.S. Constitution declares that there should be a separation of church and state. They are hesitant to inject Christian beliefs into politics. God’s Word, however, makes it clear that there is no neutral position,” Ham said. “God’s people need to unashamedly and uncompromisingly stand on the Bible and its absolute standards. We need to proclaim a Christian worldview and the gospel, all the while giving answers for the hope we have.”

Ham’s speech will touch on social issues such as abortion, “gay” marriage, origins, and the role of religion in society. He will encourage Christians to know what the Bible says on these matters and help them understand how to defend the biblical viewpoint in an increasingly hostile environment.

“We need to learn what we can do to call America back to the only sure foundation—biblical authority,” Ham explained. “We need to stand unashamedly upon God’s Word in the face of a skeptical society and find out how we can do more than just watch our country slip into a moral quagmire.”

And yes, I will have a number of quotes from President Obama to comment on—and many others.

Please be in prayer about this presentation and send this information to your friends, church, etc. so that people can watch it live on their computer. It really is a call to the church and nation to return to the Word of God.

A Tribute to a Pioneer

I encourage you today to go to the AiG website and read the article entitled “A Tribute To A Pioneer.” A dear friend from Australia who was a medical and creation ministry pioneer, Professor John Rendle-Short, passed away recently. In many ways, the AiG ministry and our Creation Museum are part of Prof’s legacy!

He wrote a pediatric textbook that is still being used today.

This professor pioneered research into autism.

He was given the great honor of being made a Member of the Order of Australia.

This man was a professor in Child Health at the University of Queensland Australia for 24 years.

And he was a six-literal-day, young-earth creationist!

Regardless of what some naysayers might claim, you can be a biblical creationist and receive world recognition for great research! Professor John Rendle-Short (or “Prof” as we all affectionately called him) passed into the presence of his Savior on January 21. Prof was the founding chairman of the board of directors for the Australian creation ministry that started in our home in the late 1970s, known as the Creation Science Foundation (CSF).

Prof had emigrated from England to Australia, but he always maintained a deep love and burden for his native country. For example, he pleaded with me (nearly thirty years ago) to travel to England and help reach the English church and the nation with the creation/gospel message. This resulted in the founding of an affiliated CSF ministry in that country, which later changed its name to “Answers in Genesis” when it became a sister organization of our Answers in Genesis ministry in the U.S. Further on in the article I continue:

I encourage you to read the entire article on the AiG website. I wanted to honor a great Christian hero, a medical pioneer, and a great leader in the modern biblical creation movement. Here is the last photograph we took of Prof and his wife a few years ago: 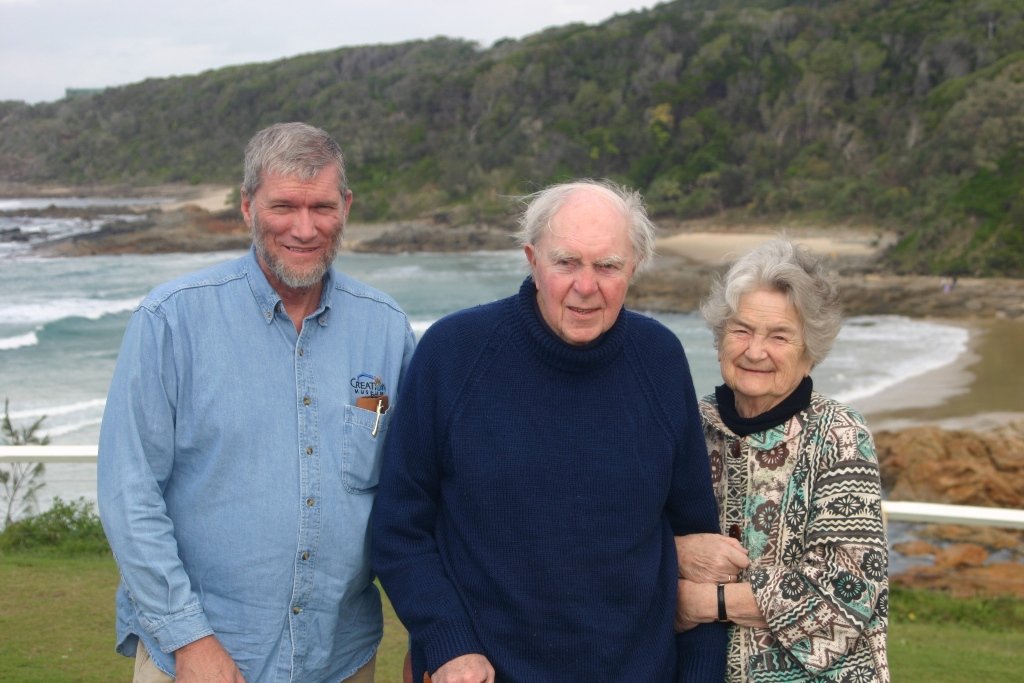 I took them by the hand

(Jeremiah 31:32) the covenant that I made with their fathers in the day that I took them by the hand to bring them out of the land of Egypt

When the Lord Jesus Christ saved us, we named ourselves sinner and begged Him to save us; He reached out His nail-pierced hand and tenderly took and saved us. Thanks for stopping by and thanks for praying, Ken