We strongly encourage atheists and agnostics to visit our Creation Museum. For example, we welcomed a group of over 285 atheists/agnostics on one day last August. Think about it: would most atheists even think about visiting a church and hearing the Bible be preached, including the gospel message? But they might consider touring our museum out of curiosity—and thus get biblical teachings.

On Tuesday we were visited by three members of a group called SOMA (no, not the School of Missionary Aviation in Canada!)—the Society of Open Minded Atheists and Agnostics, from the University of Kansas.

They purchased one of our children's books, and I signed it for them. I was asked to make it out to “SOMA,” which I did—and then added the words “God bless.”

The three had been filming throughout the museum, and because they had a nice video camera, we inquired if they were with the media. The cameraman said he was just shooting for fun, and that he had “checked out” this quality camera to use for shooting here at the museum. The young man said that he was not producing a video for a college class, so we'll see where his finished video project ends up.

Meanwhile, we have to note that SOMA’s very name indicates that its members are supposedly open-minded, yet they admit that they are closed to considering an alternative worldview—its website declares that they are “advancing a nonreligious worldview.” Let's hope their visit to the museum, where they were presented with a far different worldview than what the U. of Kansas exclusively teaches, was eye-opening, and will challenge their thinking. In other words, let's pray that they will be open minded.

Visitors to the museum last Saturday and Sunday were Tom and Cynthia Hosking from the Seattle, Washington, area. They flew out to tour the museum, plus visit relatives—Cynthia’s sister is Renee Looy, who moved from California with her husband Mark to help me start the Answers in Genesis ministry here in the Cincinnati/Northern Kentucky area back in 1994.

Before she married Tom, Cynthia used to be a flight attendant for Northwest and Alaska airlines; she reminded me of the first time we met back in the late ‘80s, when she served a meal to me on a flight—after she heard my name mentioned on the plane, she came up to me and said: “Ken Ham? No way! I’m Renee Looy’s sister!”  Then she elbowed me (gently) on the shoulder.

One of the highlights of Cynthia and Tom’s weekend visit to the museum included the animation video in our Flood exhibit area—where the Flood’s waters are shown encircling the globe. They also especially enjoyed hearing Carl Kerby speak, and watching the Last Adam film on the life of Christ. Gomer—the camel in our petting zoo—was also a hit for them.

“Wow” is one word they used to describe the museum, plus the term “amazing,” adding that the museum equals or surpasses what you might enjoy at a major theme park. It was all much more than what they expected, they told us, and said they will be definitely promoting the museum to family and friends. “It was worth the flight over—plus to see family, of course,” they added.

In the photo, here I am with the Hoskings (to the right), along with the Looys (left). 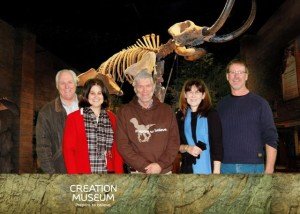 Over 14,000 people have now attended the Creation Museum’s “Bethlehem’s Blessings” (including a Live Nativity)—and the response has been phenomenal. People have said it way exceeded their expectations—they have been overwhelmed. There are two more evenings for this program, (don't miss out!) this Friday and Saturday evenings—see the Creation Museum website for details.

930,000 Visitors have now been through the Creation Museum doors since opening in May 2007!! We are well on the way to see our millionth visitor sometime in March/April 2010. Attendance this third year has so far exceeded attendance in the second year for the same time period! Praise the Lord!

(Acts 11:14) Who shall tell you words, whereby you and all your house shall be saved.

The gospel we preach is not a lifestyle; it is reliable words about the Lord Jesus Christ that can bring them and their family to salvation from sin and hell. Thanks for stopping by and thanks for praying