I missed my friends Tom and Cheryl Cantor of San Diego this past weekend as they toured the Creation Museum for the second time (they were here at our museum grand opening in May 2007). I was speaking near Tulsa, Oklahoma when Tom and Cheryl were at the museum.

Tom is someone who is always sharing his Christian faith—he even presented the gospel to one of our café staff members! (Tom was pleased to know that all of our staff are committed Christians.) Tom sends me accounts of people he witnesses to on planes, in airports, and in other countries—I don’t think I’ve ever met someone so bold in witnessing. Many around the world have committed their lives to Christ as a result of Tom presenting the gospel to them.

In the photo, Cheryl (center) and her mother from Akron, Ohio, are standing beside Tom, who is holding one of his witnessing booklets, “How a Jew Became a Scientific Creationist.” It shares Tom’s fascinating Jewish background as well as his scientific training. Even though Tom owns successful businesses in America and Mexico (which I have toured), his real passion is evangelism—especially to reach Jewish people (all around the world) with the gospel. Even at his business he proclaims biblical truths to his workers—read this fascinating Answers magazine article about Tom for more. 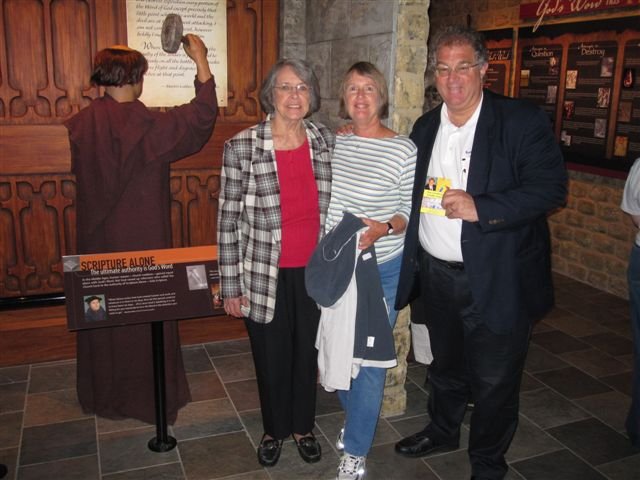 Yes, Tom—a scientist as well as businessman—sees the importance of creation evangelism in presenting the gospel!

And one more thing to know about Tom: the short devotionals I often leave at the bottom of these blog items are written by Tom!

I have been a proud follower of Christ since March 2009. I just wanted to say thank you for being on top of all the negative issues that Christians are facing in these tough times. I just finished Dr. Lisle’s book The Ultimate Proof of Creation. Awesome book. It is true no atheist or evolutionist can defend their worldview using reasoning or logic. Chemical accidents cannot reason. It’s sad how many people accept this. . . . I plan on visiting your museum after I am finished with college.

We have a place of cleansing, a wonderful fountain of the blood of the Lord Jesus Christ to cleanse us from the defilement of pictures and movies.

Previous Article A Spectacular Creationist Darwin/Galapagos Movie Release Next Article Who Wants to Be a Millionaire?