On Tuesday, well-known Christian motivational speaker and author Zig Ziglar was in town for a seminar at the U.S. Bank Arena in Cincinnati. About 15,000 people were in attendance at this meeting (which also featured former first lady Laura Bush, Gen. Colin Powell, former mayor Rudy Giuliani, and others).

Before the conference, he paid another visit to our Creation Museum (we’re on the other side of the Ohio River)—here is a photo of Zig with his wife, Jean, and daughter, Julie, inside the museum: 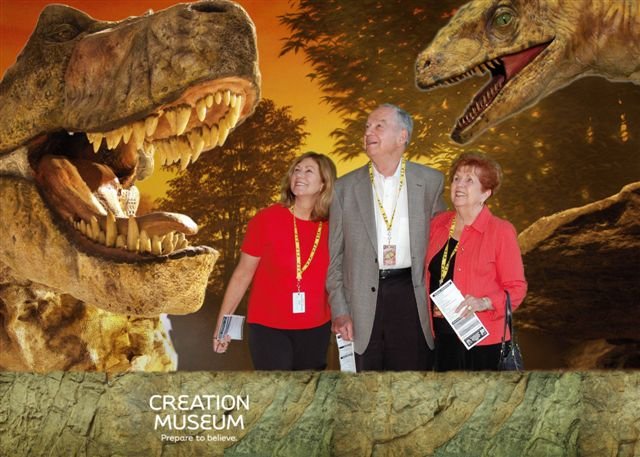 Zig toured the Creation Museum just after it opened in 2007. At that time, he told us that the “Creation Museum is spectacular! I've been a Christian for many years, but this museum has strengthened my faith. Visitors won’t leave untouched after touring this museum.”

Years before that, he wrote the foreword to one of my co-authored books on how to fight racism. Zig, now 83, told me that it was a black woman who led him to the Lord many years ago, and, thus, the topic of racial reconciliation is dear to him.

I found out later that the husband of one of our staff members became a Christian through Zig’s ministry. Paul M. attended one of Zig’s conferences in Orlando about 15 years ago. Zig encouraged the participants to get a free copy of his audio cassette in which he shared something about his life and also his Christian beliefs.

A few days later, while driving along a highway, Paul put the cassette in his car’s tape player and listened to Zig's testimony. Zig remarked that if anyone was driving while listening to the tape and wanted to repent of their sins and receive Christ as Savior, they should pull over to the side of the road and make that prayer to God. That’s what Paul did! Now he and his wife Cindy are serving the Lord together—she’s here at Answers in Genesis.

We are starting to get emails/phone calls with responses from the recent Atlanta ministry at First Baptist Church:

Looked for some to take pity, but there was none

(Psalm 69:20) Reproach has broken my heart; and I am full of heaviness: and I looked for some to take pity, but there was none; and for comforters, but I found none.

What Thou, my Lord, hast suffered, was all for sinners’ gain; Mine, mine was the transgression, but Thine the deadly pain. Lo, here I fall, my Savior!