The following was written by a college student for the Update newsletter of her former high school in Wisconsin. She wrote an article about the persecution she endured when attempting to present our AiG’s “7 C’s” approach in a college class; she has granted us permission to post it here (we’ll hide the name of the secular college).

On the first day of my college philosophy class, the students in the class introduced themselves. Along with telling our names, we had to tell where we were from and the most important thing we have learned in our lives. When everyone finished, our professor told us her name and what was important to her. She ended by saying, “If any of you are Christians, don’t plan on being one when this class is done.” My jaw dropped when I heard this; I wasn’t quite sure what I was getting into. I reminded myself that this was a class I needed for my major, so I had to stick with it.

Throughout the year, we talked about all the different religions; it seemed like every day Christianity got thrown into the discussion. There was never anything positive that was said about Christianity. My professor said that the Bible is a cute little story but has no real meaning.

. . . At the end of the semester we had a final project. We had to give a ten-minute presentation and write a four-page paper on our presentation, and these two things were worth 50% of our final grade. I decided to write my paper/presentation on the “Seven C’s of History” by Answers in Genesis. The “Seven C’s of History” is a brief history of the Bible and includes Creation, Corruption, Catastrophe, Confusion, Christ, Cross, and Consummation.

The big day came and I had spent hours working on my presentation and paper with my dad. I was the first one to present that day and had everyone’s attention the whole time, which was very unusual. Normally kids are texting or doing other homework. When I was done, I thought I had done well, especially since I had everyone’s attention; but little did I know what was in store for me. For the next forty minutes of class, my professor picked apart my presentation and was furious. She yelled at me for saying that on the last day God will judge all the people and there will be a separation between the believers and the unbelievers. She thought those were my words and didn’t understand that that is what the Bible tells us. She also thought that it was too harsh. She went through every “C” and found something about it to pick apart. I wasn’t even able to stand up for myself or for Christianity, because there was no break in her anger.

I found this class period interesting because two weeks before, I stayed after class talking with her and two other students; and she had told us that it was wrong of us to think that Christians get persecuted. Rather, we (Christians) are the ones persecuting others.

After the class, all the students handed me their evaluation forms. When I went through them, I noticed that I received high marks, and all A’s from the class, except two which gave me B’s. I had one girl come up to me after class and tell me that she was sorry for how the class went and that our professor went overboard. I told her it was okay, and thanks. She then asked me, “What do you mean it was okay?” I told her, “I’m a Christian, and I’m going to get persecuted for standing up for what I believe in (Matthew 5:10–12).” She shook her head, and said, “Wow, I can’t believe you found something positive to take out of this last class.” Hearing her say that really showed me that I did do something right, and even though I had many people against me, I know that God was with me and proud of me, and He was the only one I cared about.

When we got our final grades, I received a “No Grade” on my presentation and paper. My professor said that she was too heartbroken to give me a grade, because I obviously didn’t do any of the readings or take anything from this class. I emailed her and told her that just because I don’t believe everything that was taught in this class, doesn’t mean I didn’t learn anything. I did, in fact, learn a huge lesson, and that was to stand up for what I believe in, even if I’m the only one.

I don’t think I have ever dug as deeply into my Bible as I did this past semester. I found so many verses telling me that this would happen, and that there is a reward for those who share God’s Word. Some of the verses I read numerous times were, Matthew 5:10–12, Matthew 28:18–20, Mark 13:13, and John 3:16. Although I didn’t learn the lessons my professor wanted me to, I learned an even bigger lesson that I will carry with me for the rest of my life.

As I look back on this event, I’m thankful for the Christian home and high school that helped prepare me for this. It is great to have role models to look back on as I face new situations in my life.

One of the more supportive churches of Answers in Genesis over the past 15 years in our area has been Calvary Baptist Church. It has had many fine Bible teachers over the years, including the well-known radio preacher and Bible conference speaker Warren Wiersbe–and then my dear friend Dr. Charles Wagner (in the 1990s and the early part of this decade). Pastor Jeff Davenport’s first time in the pulpit as the new senior pastor was last Sunday, and the next day he visited our Creation Museum (about a 20–25 minute drive away down I-275)–along with some leaders of his former church in southern Ohio.

Welcome, Jeff and family, to the area. 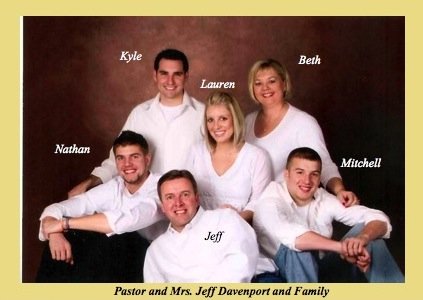 Randy and Nena Hobbs (and her mother and stepfather, Dorma and Jim Drake) from northern Indiana came to the Creation Museum on Monday to party—birthday party that is! 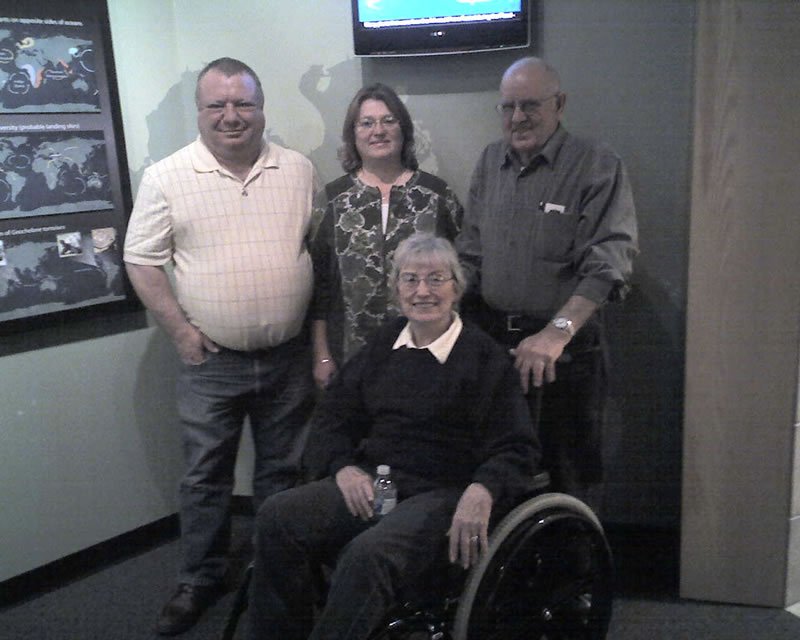 Nena, Dorma, and Jim all have March birthdays and decided the perfect place to celebrate would be at the museum. Dorma, in the wheelchair, was especially excited to see the new natural selection exhibit (it opened the day before).

(Genesis 19:12) And the men said unto Lot, Have you here any besides? son in law, and your sons, and your daughters, and whatsoever you have in the city, bring them out of this place:

The first step in compassionate family evangelism is to own our own as those whom we must be sure are saved from wrath by receiving the Lord Jesus Christ.