Dr. Mitchell and Dr. Dawkins Go Back to College

Last week, Dr. Tommy Mitchell of our staff spoke to a large group at the University of Southern Indiana in Evansville. This meeting came about due to the efforts of several student leaders on campus. Leading evolutionists Ken Miller and Eugenie Scott had spoken in the area in the last 2–3 weeks, and the sponsoring students did not feel that both sides of the issue had been fairly presented. 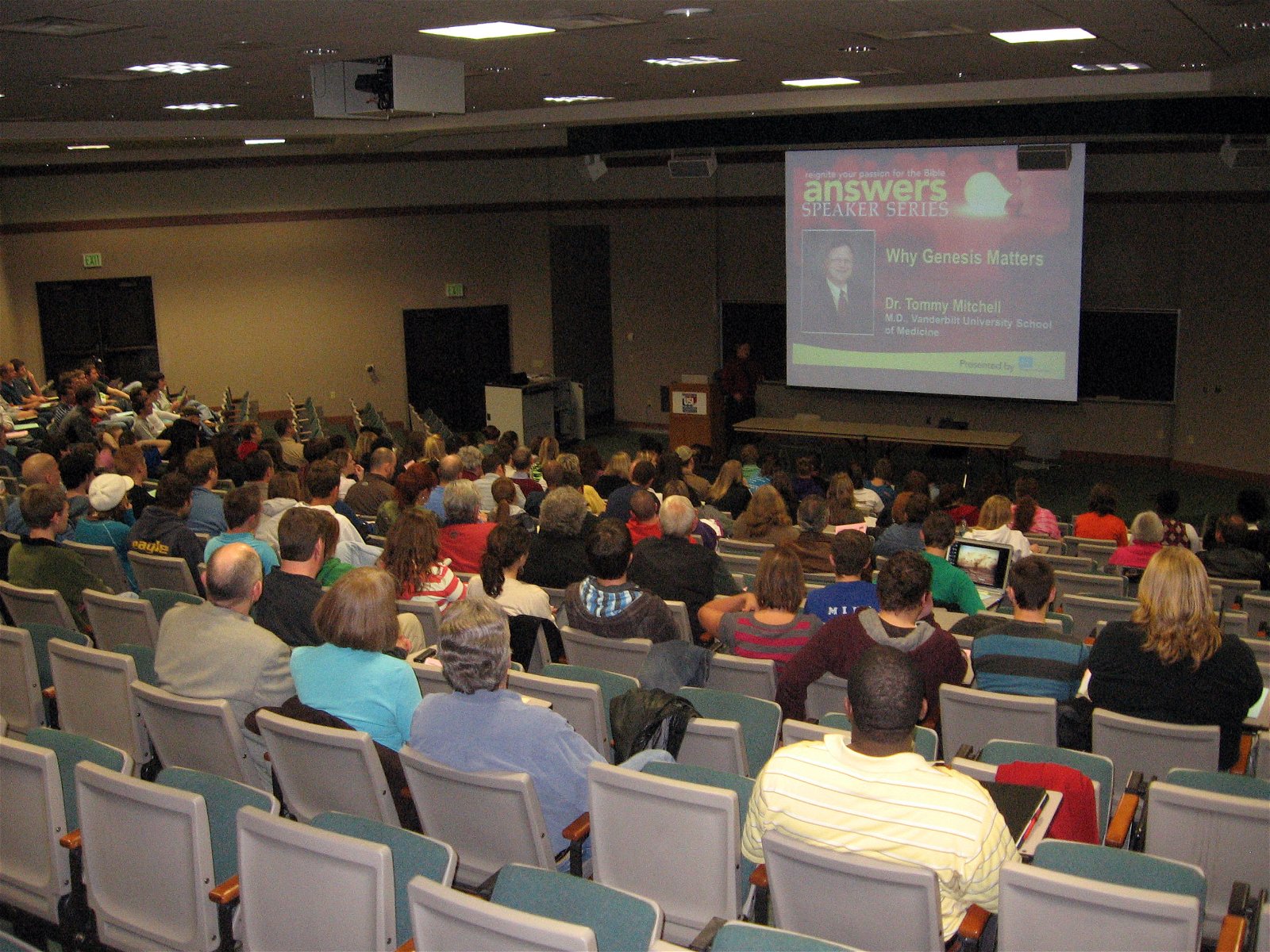 Dr. Mitchell had over 180 people attend his lectures. He gave two presentations: “Why Genesis Matters,” in which the importance of understanding the history in Genesis chapters 1–11 and its relationship to the major doctrines of Christianity were shown, and “After Their Kind,” which dealt with both natural selection and racism. Both sessions generated many questions during the break and after the last session.

As Dr. Mitchell was preparing to leave the lecture hall, a young lady approached him with a big smile on her face. She told him:

I came into this room as an evolutionist. I was fully prepared to dispute everything you said tonight. But after your presentations, I now know that I can trust my Bible completely. Thank you for answering my questions, even before I asked them!

We praise God for the opportunity of interacting with students in these university settings. Testimonies like this encourage us to keep fighting the good fight. We pray that the Lord will open many more doors for us to minister in these secular settings.

As part of this “Darwin Year” (Darwin’s 200th birthday), atheist professor Richard Dawkins is on a lecture tour of America while I’m in his homeland (England) on a speaking tour about Darwin and his legacy. Dawkins was invited to give a lecture at the University of Oklahoma recently. A couple of AiG supporters went along and sent this intriguing report:

[We] went to the Dawkins lecture last night at the University of Oklahoma as part of their year-long Darwin celebration. I thought I would give you a quick report.

It was held in the old field house at OU that supposedly seats about 3000. The bleachers were about 70 percent full, but they had seats on the floor; so, I expect there were around 3,000 attendees. Admittance was free, but I understand Dawkins was paid $30,000. If everyone had to pay $10 to get in to cover his share speaking honorarium, I doubt there would have been anywhere near that many in attendance.

After an introduction, Dawkins came to the podium to a rousing standing ovation. [We] almost felt these folks were worshiping. Anyway, with such a grand reception we were expecting a dynamic presentation. Although the title of the lecture was “The Purpose of Purpose,” Dawkins spent the first 15 minutes ridiculing religion in general and Christianity in specific. He played a video that had the crowd in an uproar of hilarity; most of the humor was lost on [us]. It showed a bunch of animation of storks delivering babies and some video of a supposed creation scientist explaining how a banana was specifically designed for ease of human consumption—and then a shot of the a supposed “wild” banana with a totally different shape. I suppose the stork segments were supposed to portray the lack of scientific understanding of Christians (or creationists), and I viewed the banana portion as being lame on both sides (this lecture had a decidedly adversarial, us vs. them, flavor).

They also had a screenshot of photos of Kent Hovind looking through a Photoshopped jail cell and one of Ken Ham. From what I could, see the photo of Ken Ham was an unobjectionable one of him in the museum with the label underneath “Ken Ham Creation Museum.” The photos were enough to bring another round of laughter from the crowd. . . . [W]e seemed to be surrounded by a bunch of mind-numbed robots.

After the video, Dawkins continued his belittling of religion (I’m pretty sure in Dawkins’s mind, religion and Christianity are synonymous) and more laughter. . . . Finally, he got around to his subject of “The Purpose of Purpose.” After his big rounds of applause and adoration, as I said, I was expecting a dynamic and thought-provoking speech. Instead, I would have been asking for a refund of my $10 share of his speaking fee. It really was a dull and dreary presentation. I believe I can easily paraphrase his answer to the Purpose of Purpose or simply “Why?” His conclusion was brought forward in the first 30 seconds of his talk and can be stated as “It’s a stupid question. It just is. So, don’t ask.”

After learning this, we spent another 30 minutes trying to stay awake. Gimme my money back—oh, wait. I didn’t have to pay. He fabricated a couple of terms, Neo-purpose and Archeo-purpose. Apparently, Archeo-purpose features are naturally evolved and Neo-purpose features are man-made. He does a reasonable job of making the analogy of natural features such as tail feathers of birds and homing abilities of bats to the man-made features of tail sections of airplanes and guided missiles. He then jumps to the brilliant deduction that these similar features are totally unrelated. I  guess an extraterrestrial came down and imparted this revelation to him.

He then had a 45-minute question and answer period, after which you could go buy a book and get it autographed. . . . A couple of the questions were somewhat memorable to me:

One young man asked a question that I don’t remember exactly, but it was something to the effect of: “Do you think organized religion is used as an ‘end run’ by creationists to disregard the fact of evolution?” To which Dawkins replied that he wasn’t familiar with the phrase “end run,” but asked whether it had something to do with baseball or American football? The young man looked a bit confused and responded that he didn’t know anything about baseball, either.  And then said, “I live in a basement.”

Another question was from what I assumed to be a Christian. He asked that since evolutionists didn’t see any purpose to life, what gave them the moral authority to condemn people like Hitler and Pol Pot and their actions? I think Dawkins was somewhat dumbstruck; [he] stuttered around for a while and finally came back with “all people probably have morals instinctively and intuitively; morals can come from many places—predecessors, friends, politicians [huh?], etc. Morals are constantly evolving. Essentially, morals can come from anywhere but religion.” Wow, what a conclusion! Morals can come from anywhere, except definitely not God.

I had thought about bringing my daughter and was worried that Dawkins might be too convincing for such a young person. I needn’t have worried. I think you can only accept his level of illogic with years of unchecked indoctrination and the complete abandonment of deductive reasoning skills. I don’t believe he could proselytize anyone in a 1-hour presentation.

Well, at least Dawkins knows about the Creation Museum and advertised it! But it is not the “Ken Ham Creation Museum.” It is the Lord’s museum, and the Lord raised up many people to bring this vital outreach into existence in 2007 (praise God that we’ve had over 652,000 visitors in only 21 months). Dawkins and other secularists must be very worried about the effect of the Creation Museum—they have been frequently “advertising”’ it!

I don’t get angry at Dawkins, but I do feel sorry for him. If he keeps going the way he is, Dawkins is going to an eternity separated from God. We need to pray for Richard Dawkins that the Lord would soften and change his heart. Just imagine the impact it would have if Dawkins had a Damascus Road experience like the apostle Paul!

(Genesis 22:8) And Abraham said, My son, God will provide himself a lamb for a burnt offering: so they went both of them together.

None of man’s invented religions/philosophies can get him to Heaven; there is only one way to reach Heaven. It’s through God’s provided Lamb, the Lord Jesus Christ.