What Is the New Animal at the Petting Zoo?

Many of you may remember my recent blog where I showed a photograph of our recent addition to the Petting Zoo at the Creation Museum and asked blog readers to see if they know the biblical kind it belongs to—and what its name should be. 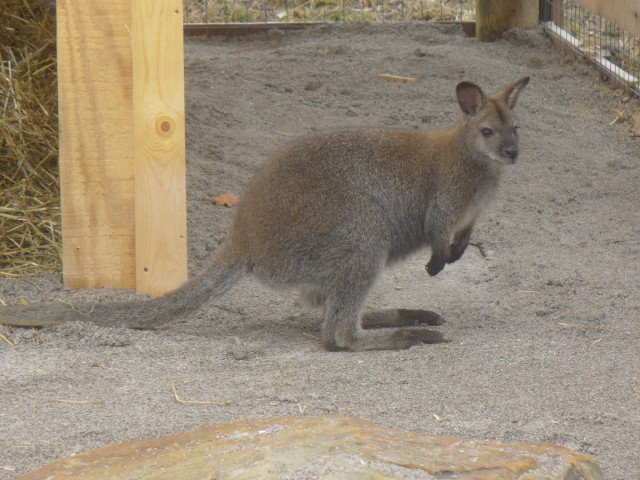 Well first of all, let me share samples of some of the responses (and thanks to all of you who sent in emails—we do read them all). It is also thrilling to see people adding other comments about the ministry of AiG being a blessing to them as they sent in their answers:

Okay–so what is the answer? From the Tasmanian (Australia) Parks and Wildlife website we read:

The Bennetts wallaby is one of Tasmania’s most commonly seen native animals. The species is also widespread in the southeast of mainland Australia, where it is known as the red-necked wallaby. Visitors to most of our national parks are highly likely to encounter these animals during their stay.

Often referred to as a kangaroo in Tasmania, males can weigh more than 20 kg [over 44 pounds] and stand up to 1.5 m tall [almost 5-feet]. They can be distinguished from the pademelon and Forester kangaroo by their black nose and paws, and white stripe on the upper lip. So you can now see a member of the kangaroo family at the Creation Museum Petting Zoo. Make sure you come soon!

(John 12:10–11) But the chief priests consulted that they might put Lazarus also to death; Because that by reason of him many of the Jews went away, and believed on Jesus.

The more we persuade and speak openly to the lost of the new life we received from the Lord Jesus Christ, the more the enemies of the Lord will go after us. Thanks for stopping by and thanks for praying,

Previous Article Rejoicing in Heaven Next Article Are Creationists in Trouble?