God’s Word states that “faith comes by hearing and hearing by the Word of God.” The Bible also tells us to be “always read to give an answer” (1 Peter 3:15). It always amazes me how the infinite Creator God uses such weak, fallible humans such as ourselves to reach others through our speaking events, books, and other resources to give answers to skeptical questions—but in all we do to bring people the most vital message in the universe: the gospel of Jesus Christ. We give all glory to Him when we hear of salvation testimonies such as this one:

I had been reading Ken Ham’s little books Did Adam Have a Bellybutton? and Did Eve Have an Extra Rib? about five years ago - I’d read them on the treadmill. I’d read a Q/A and say to myself “that makes sense…” then another Q/A.. “that makes sense, too.” At some point, I decided that I would believe the Bible – as it was written. No more trying to figure out if I really thought this or that could have happened, and I firmly accepted Christ as my Savior. I had been going to a tremendous church for about a year, but I really believe that it was Ken Ham who reached me. When we were lucky enough to be in N Ky last year when he was at the museum, I had him sign a book. I wanted to tell him my story, but I just stood there like I was star-struck. My husband figured out that I was going to leave without speaking, so he told Mr Ham that he was instrumental in my being saved. He was nice enough to pose for a picture with me. I’ve met some big-time movie stars and famous athletes in my time, but I’ve never before stood before someone unable to tell him how he touched my life. This is why I’m so interested in providing AiG materials for my children. I’m really looking forward to putting that big box of ‘stuff’ that I bought at the museum to good use. 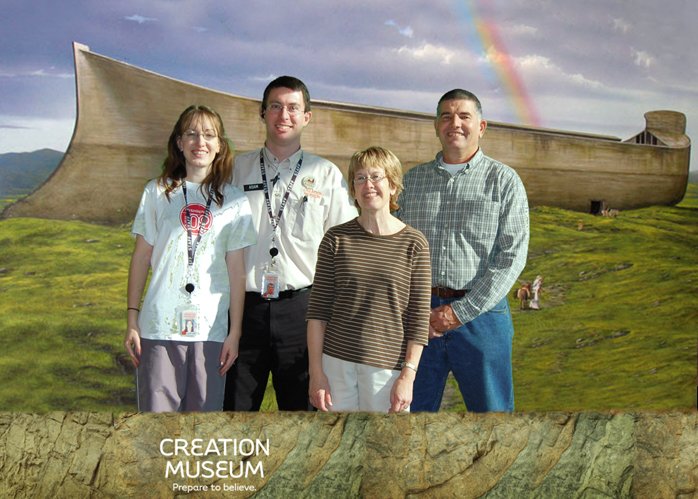 I have included a photograph taken last week of all the AiG staff (well—nearly all—some were already away on vacation). It was taken in our special effects theater inside the museum. I praise the Lord for those He has brought to this ministry to make it what it is.

The hope and strength

(Joel 3:16) The LORD also shall roar out of Zion, and utter his voice from Jerusalem; and the heavens and the earth shall shake: but the LORD will be the hope of his people, and the strength of the children of Israel.

The basis for our security and expectation that all will be well is not found in a religion or a church or a group, but in one person alone, the Lord Jesus Christ. Thanks for stopping by and thanks for praying,