A Fox News report today caught my eye with the headline, “‘Why Believe in a God? Just be Good’ Ads Set to Run Next Week on D.C. Buses.”

A secular humanist group is paying for the ads on Washington, D.C., buses. The report stated:

Ads proclaiming, “Why believe in a god? Just be good for goodness’ sake,” will appear on Washington, D.C., buses starting next week and running through December. The American Humanist Association unveiled the provocative $40,000 holiday ad campaign Tuesday. . . .

“We are trying to reach our audience, and sometimes in order to reach an audience, everybody has to hear you,” said Fred Edwords, spokesman for the humanist group. “Our reason for doing it during the holidays is there are an awful lot of agnostics, atheists and other types of non-theists who feel a little alone during the holidays because of its association with traditional religion.”

. . . Edwords said the purpose isn’t to argue that God doesn’t exist or change minds about a deity, although “we are trying to plant a seed of rational thought and critical thinking and questioning in people's minds.” The group defines humanism as “a progressive philosophy of life that, without theism, affirms our responsibility to lead ethical lives of value to self and humanity.” Atheists are planning something similar for London in the United Kingdom (which is also mentioned in this report):

Last month, the British Humanist Association caused a ruckus announcing a similar campaign on London buses with the message: “There’s probably no God. Now stop worrying and enjoy your life.”

I just shake my head when I hear atheists using the word good. Who decides what good means in their worldview? If there is no absolute authority, then good is relative and can be defined anyway we decide—although with such a subjective definition, why should anyone else agree with our definition?

Now behold, one came and said to Him, “Good Teacher, what good thing shall I do that I may have eternal life?” So He said to him, “Why do you call Me good? No one is good but One, that is, God.”

Regardless of their obvious inconsistency in using the word good, secular humanists are providing just another example of how they are on the war-path in this country (and the U.K.)—they are becoming more blatant and more aggressive! This nation is changing dramatically.

You can read the entire Fox News report at:

At the final session of our Grand Rapids AiG conference last night in Michigan, a young boy (I found out later he was eleven years old) came to me and said, “Mr. Ham. Thank you for your talk tonight. Now I understand how to reach my friends at school with the gospel. They are ‘Greeks,’ and I need to witness to them by starting at the beginning in Genesis so they will understand the gospel.” He got it! (See this article for more on what we mean by this approach to evangelism.)

I have also included a photograph of myself–with my wife, Mally, along with Buddy and Kay Davis on the stage at the church where we conducted the AiG conference. We are standing beside two of the new banners we are using as part of our outreach set up. 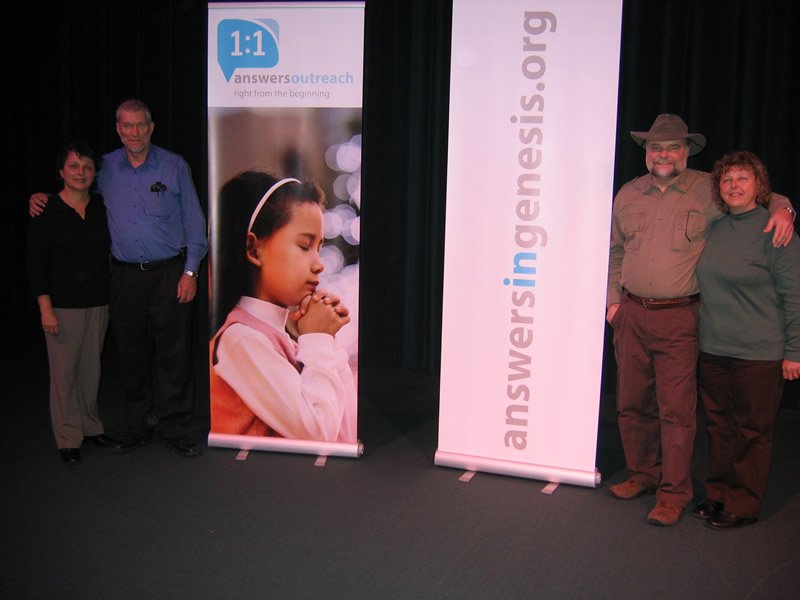 (Hebrews 3:12–13) Take heed, brethren, lest there be in any of you an evil heart of unbelief, in departing from the living God. But exhort one another daily, while it is called To day; lest any of you be hardened through the deceitfulness of sin.

The course downwards is always the same; to depart from Christ, the means is always to make sin appear attractive, and the goal is always to harden the heart. Thanks for stopping by and thanks for praying,