It was good to see longtime AiG friend Dr. Phil Giessler of the Cleveland, Ohio, area here at the museum again on Monday—along with his wife, Inez. As is his habit now, this respected Lutheran theologian and scholar took advantage of his Creation Museum membership and brought some more guests with him on his return visit (using guest passes that are allotted to museum members).

Christian newspaper publisher and editor Herman Otten—of the national newspaper Christian News (which is particularly well known in Lutheran circles)—and his wife, Grace, met up with their old friend Phil here in northern Kentucky and visited the museum for the first time. They live in St. Louis, and have known AiG speaker Dr. David Menton for many years (Dr. Menton moved here from St. Louis a few years ago). Herman has written on the creation/evolution issue for years and even allowed Phil recently to write very long (glowing) reviews about the Creation Museum for Christian News.

The Ottens were joined by an artist friend (Russell), who also lives in St. Louis; he had particularly nice things to say about the artistry shown in the museum, but reserved his highest praise for how the gospel is proclaimed throughout the museum. It’s wonderful to have such Christian leaders on board with us. I’ve included a photograph of the group as we all met for lunch at the office. 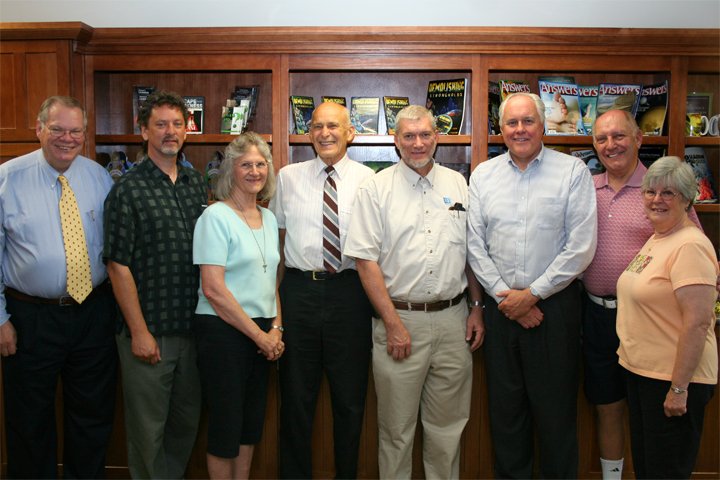 It certainly is encouraging to receive emails like this:

Hi. I just wanted to say that my family and I watched Dinosaurs, Genesis and the Gospel DVD. We also watched Raising Godly Children in a Ungodly World (separate DVD). WOW! to both of them. I just wanted to say how great, encouraging, and blessing it is that these resources are out there to both Christian and non-Christian people. I thank God for this ministry and how we were able to see these DVDs via the public library. God Bless.

P.S. Please if you can, tell Ken Ham and Buddy Davis I said hi, and you’ll be in my prayers. Thanks.

By the way, the Dinosaurs, Genesis and the Gospel DVD is a program Buddy and I did especially for children—though moms and dads love it too! You can find out more information about this DVD from the AiG online bookstore.

Last night I spoke to around 2000 at Pensacola Christian College. People lined up for over an hour afterwards to get autographs, speak to me, etc. One young lady said, “You have made a big difference in my life tonight—thank you.” Another lady told me, “The Lord used your ministry in my father’s salvation.” A student from Canada told me that because of AiG books, she had her questions answered; she said, “I don’t know where I would be today if I had not come across your ministry.” A number of people told me they really wanted to get involved in the creation ministry. I received so many testimonies that I just could not write all them down. I will include some photographs of the evening in my blog on Thursday.

(Jos 5:12) And the manna ceased on the morrow after they had eaten of the old corn of the land; neither had the children of Israel manna any more; but they did eat of the fruit of the land of Canaan that year.

Sometimes by the miraculous, sometimes by what is common, either way the Lord Jesus Christ provides for our needs, & either way we give Him thanks. Thanks for stopping by and thanks for praying,