The operations manager for the organization Creation Research Japan visited our offices this past week, spending time with a number of AiG staff. Michiko (see her photo) has become like one of our own family. She has visited AiG before and also came to the Pacific island of Saipan when we visited there last year to film some videos. Michiko wrote up this report for me about her visit:

Creation Research Japan (CRJ) is a ministry group with a mission very similar to AiG. Japan is a very difficult country to reach out to with a Christian population of less than 1%. Also, sadly, over 30,000 people commit suicide every year in Japan. Creation evangelism is the key to reaching my people, and it could awaken them and give hope to many Japanese people.

Because culturally, Japanese people believe in many gods and spirits, the Bible’s message sounds so foreign that they cannot associate with it if not told as real history from the very beginning. If the God of the Bible is defined as the Creator, and Adam’s fall is explained as to the reason why this world is corrupted, then it is much easier for them to realize why Jesus, the Creator God Himself, had to die on the Cross to pay for the penalty of our sins, of all mankind, including the Japanese.

In June 2008, CRJ moved its office from Mito (about 2.5 hours north of Tokyo) to Tachikawa City in Tokyo. [Michiko says being in Tokyo gives CRJ a better presence and better network to help other Christian groups]. The new office building consists of three floors with a basement, and an area set aside as an auditorium for about 100 people 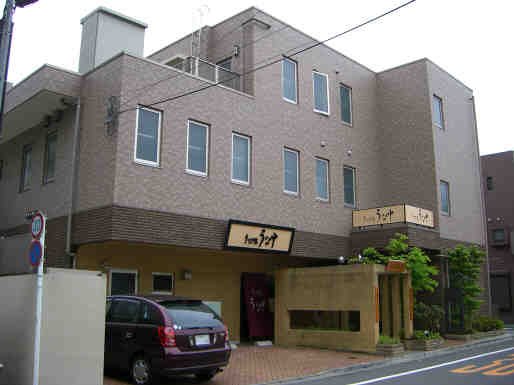 Right now, CRJ has about 500 members supporting its ministry, and its goal is to have 700 by the end of March 2009. Also CRJ is planning a “Creation Trip” to bring 20+ people to the Creation Museum, Grand Canyon, and Mt. St. Helens this October with a Japanese translator (registration is still available for the trip). See the contact info below for anyone wanting additional information. I have included a photograph of myself and Michiko while I am holding the flyer advertising this special U.S. trip. 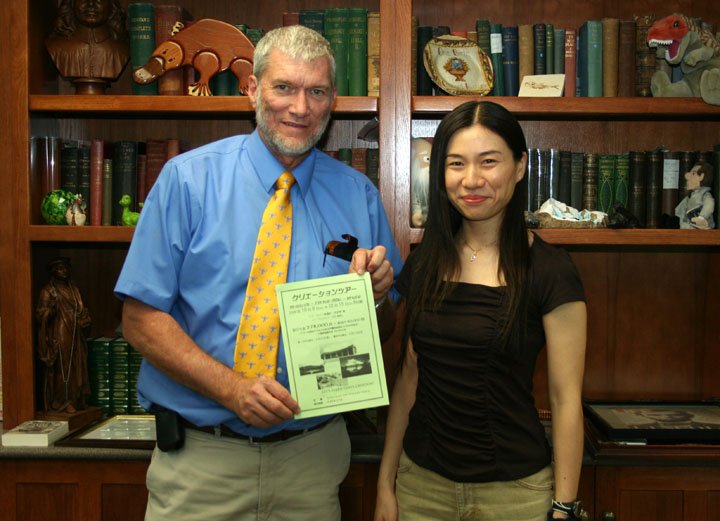 Michiko presented me with a Japanese tie. 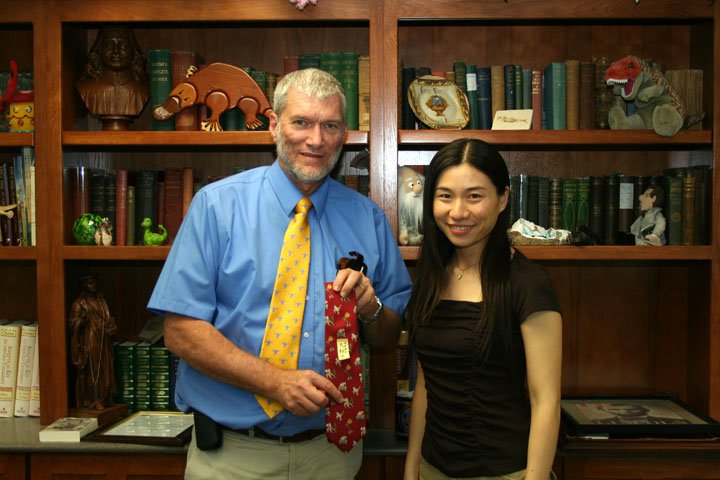 Please pray for the creation ministry in Japan.

GOODBYE TO A SPECIAL FRIEND

This is from a couple who work in our Advancement Department, Cecil and Vicki Eggert. They have had the opportunity to meet many of our ministry friends and supporters over the years:

Last week longtime friend and supporter of Answers in Genesis, Walt Kaufman, went home to be with the Lord. Since we have known Walt and his wife, Margaret, for over ten years, there was no question about attending his funeral in Frankenmuth, Michigan. He has been a faithful friend of the ministry and was passionate about the foundational importance of a historical Genesis.

Upon arriving at the church and entering the sanctuary where Walt’s service was held, we saw on the lobby wall the AiG “Promise” painting. Walt purchased the painting through us because he wanted all their church members to be reminded of God’s promise to never destroy the earth by water again. In addition to the painting, we also saw how their library was stocked with materials purchased by the Kaufmans to teach all in their church, especially the youth, on how to defend their faith.

During the funeral, the pastor remarked specifically of Walter’s passion for Answers in Genesis and the authority of Scripture. He laughed as he recalled to the audience of his initial interview to become pastor at the church. Walt’s first question to the pastor as part of the nominating committee was about his stand on a historical Genesis and the authority of Scripture. Of course, once Walt understood the pastor was strong on Genesis, he proceeded with a “thumbs up.”

Walt’s passion was for young people and training them how to stand strong on God’s Word. Even at 87 years old, he wanted to make sure the young people of his church and community had an opportunity to visit the Creation Museum (even though he understood at his age, he physically could not). Last fall, he rented two tour buses and filled them with young people and adults so they could come and visit the museum. We heard that many lives were changed as result of this tour [made possible by the] generosity of Walt and Margaret.

As a result of the visits from the youth and adults, AiG speaker Carl Kerby was given the opportunity to speak to 900 youth at a conference in Mackinaw Island, Michigan, this past week. Now that Walt has gone home to his reward, he will no doubt bring much fruit with him to heaven as a result of the legacy he has left behind through his passion for the message of Answers in Genesis and the authority of Scripture.

Attached is a picture of Walt and Margaret that was taken during a visit with them last July. Margaret is looking forward to coming down and visiting the museum. 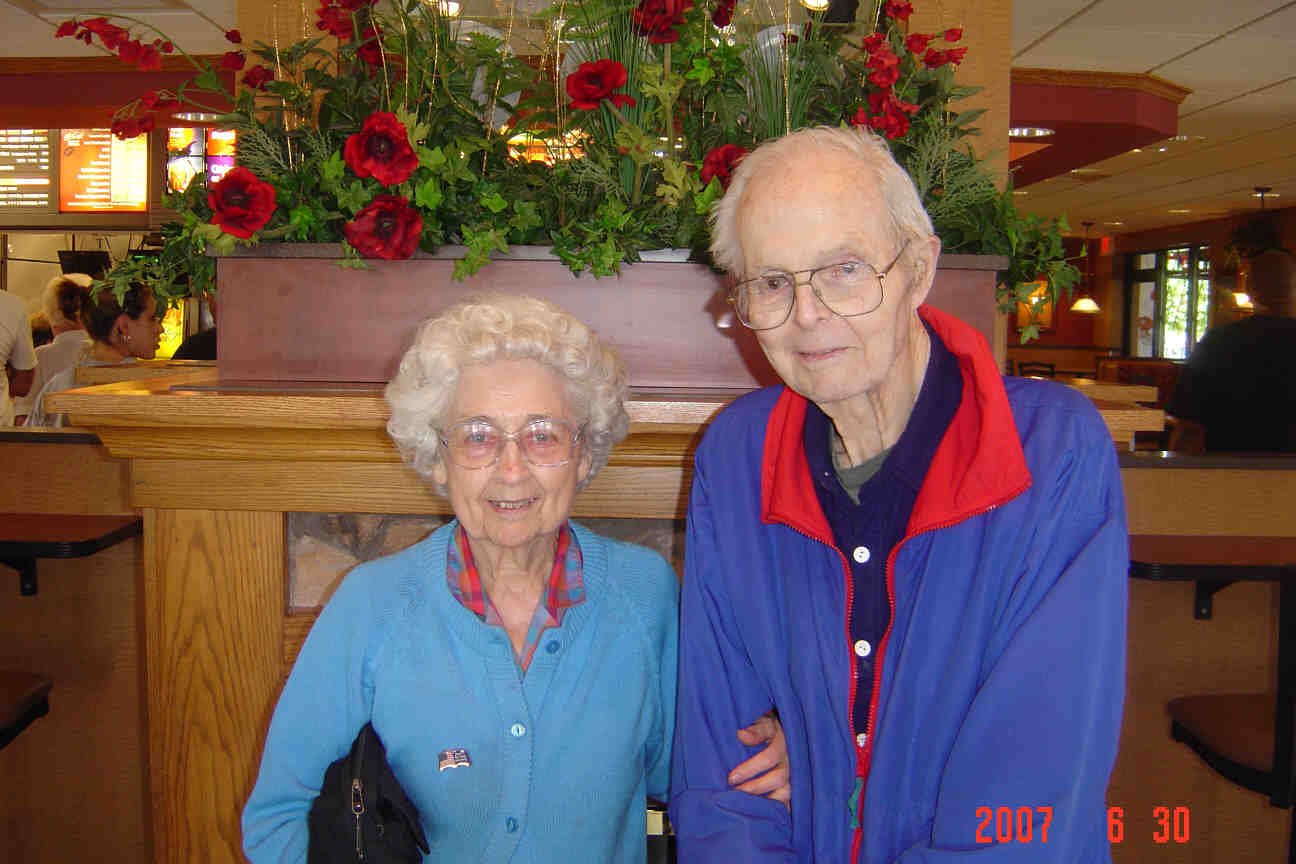 We need to pray the Lord will raise up more dedicated people like Walt and Margaret. And please pray for Margaret—I’m sure you could understand her loss at this time—yet she is rejoicing knowing Walt is with the Lord Jesus.