Guess Who Is Dawkins’s Worst Nightmare?

According to The Guardian newspaper (a national U.K. newspaper based in London, England), the answer is ME!!!

The Saturday Guardian contained an article with the sub-heading, “Dawkins’s worst nightmare takes his literalist Biblical message on a tour of the UK.” The reporter came by train from London to attend my speaking events in Leicester (in central England).

Last Thursday evening, I made two presentations at a public meeting in Leicester. By the way, the local secular humanist group turned out to pass out flyers at the door blasting biblical creationists and containing the usual propaganda about evolution. As I have found over and over again, most of these people do not understand what creationists believe (they don’t listen, and thus, they don’t care to get their facts right), and they made the same mistake they make time and time again of stating that natural selection is evolution (in the Darwinian sense).

Anyhow, they didn't cause any disruptions (despite the fact that humanist websites in the U.K. were buzzing about my speaking tour and were making all sorts of noise about attending the meetings and carrying out certain things). Quite a number of atheists did turn out at Bedford as well—some of them talked to me during the breaks or after the meetings, but nothing disruptive came of their presence or opposition.

The Guardian newspaper reporter who attended the Leicester meetings was polite, but asked many of the usual probing questions. He, like many other secular reporters who interview me, really struggled with understanding how we can claim the Bible is the Word of God (of course, God’s Word claims that of itself), and this particular reporter also couldn't understand why all people, as he put it, “Get the blame for what Adam did.”

Anyhow, despite some of the usual digs at what we believe, compared to many other articles in the British press, this article was one of the more fair in reporting what we believe and what I said.

I had to smile when I read this paragraph:

Ham’s energy is astonishing. His first lecture, Defending Creationism in an Evolutionary World, runs to an hour and a quarter and is peppered with videos on DNA, dinosaurs and the like, as well as numerous invitations to buy his books. Then follows 40 minutes of Dinosaurs, Genesis and the Gospel. Ham is like something conjured up in Professor Richard Dawkins’s worst nightmares, a man so intent on sticking to the precise text of a book . . . .

For the last two weeks, Ham has been on a speaking tour of the UK. According to AIG, in Bedford he spoke at a packed Corn Exchange to 600 people. The Guardian saw him on Thursday in Leicester, where AIG’s UK headquarters is located, bringing the literalist message about the Bible to about 250 people. The tour culminates in a “Creation Conference” today at Westminster chapel, an evangelical church close to Buckingham Palace.

And he (like many other reporters these days who deal with the creation evolution issue), reported on the Creation Museum:

But Ham’s ideas and his organisation, Answers in Genesis (AIG), are influential, especially in the US. In May last year, the organisation built the Creation Museum in Kentucky. Within eight weeks of opening, the $27m (£14m) attraction had clocked up 100,000 visitors."

IN IT FOR THE MONEY?

On Saturday evening, just after finishing the conference at Westminster Chapel in London, and the day before our flight back to the U.S., I received a call from BBC radio wanting to do an interview (I believe this came about as a result of the Guardian article).

The interviewer for this program was typical of so many reporters I have encountered from the British media. He was not interested in finding out what we believe so much as attacking biblical creationists—and attacking the Bible. He asked me a number of questions about science and the Bible and evolution, and I answered them by getting to the foundational issue of the origins question being very different than the observational science that put man on the moon.

But as soon as I began giving out the truth about molecules-to-man evolution concerning its belief aspect, he said the conversation was too “esoteric” for his listeners and changed direction immediately and began to talk about dinosaurs. I answered his questions as best I could—getting in as many arguments as I could in a short period of time—and then the interviewer jumped in and said that I was like an “old 19th-century preacher who had the gift of the gab and was only in it for the money.”

Anyway—one can only do one’s best under such circumstances and pray the Lord will use the conversation to reach people and open their hearts to the truth of His Word. I really think the interviewer was not expecting someone to give answers and speak so authoritatively—actually, most of them seem to hate that!!!

REKINDLING MY BURDEN FOR THE U.K.

This tour certainly rekindled my burden to reach the United Kingdom with the creation/gospel message. God’s people are so hungry for this message. The numbers for each meeting were extremely good for such a rather spiritually dead country. Over 500 people in Liverpool, 600 in Bedford, and hundreds turned up to the other meetings. All the books and DVDs we sent over for the tour were purchased—we could have sent twice as much!

As I traveled around, people told me time and time again how thrilled they were with Answers magazine—and with the AiG website. So many gave testimonies of how the website has been so important to them and in their witnessing. Also, I heard of people who are using our DVDs in their churches or in their homes to teach Christians and reach non-Christians.

So many expressed to me their burden to see the U.K. reached with the creation/gospel message. As one man said to me, “Please, please, don’t stop coming over here. We need this message. Please keep coming.” It was almost like the man from Macedonia pleading for us to come over.

I was thrilled to see the number of young people and young families at the meetings. You see, many churches in the U.K. have mainly an older generation. The younger generation, too, is so hungry for answers. One 9-year-old boy sat through every presentation at Westminster Chapel—he just loved every minute! I have a photo of him for another blog I’ll do this week.

In a previous blog, I told you of how the prayer meeting at the AiG conference in Wales really affected me. I can’t describe it. People were crying out, agonizing before the Lord for the U.K. We need to help these people! They are crying out for help to reach people with the message.

One man in London told me he was talking with a police officer about why there are so many violent crimes among teenagers today. The police officer told him, “They just seem to believe life is purposeless and meaningless—this is permeating the young people.” As the man said to me, “They need this message AiG brings—they need it.”

I have included a few photos of the U.K. trip: 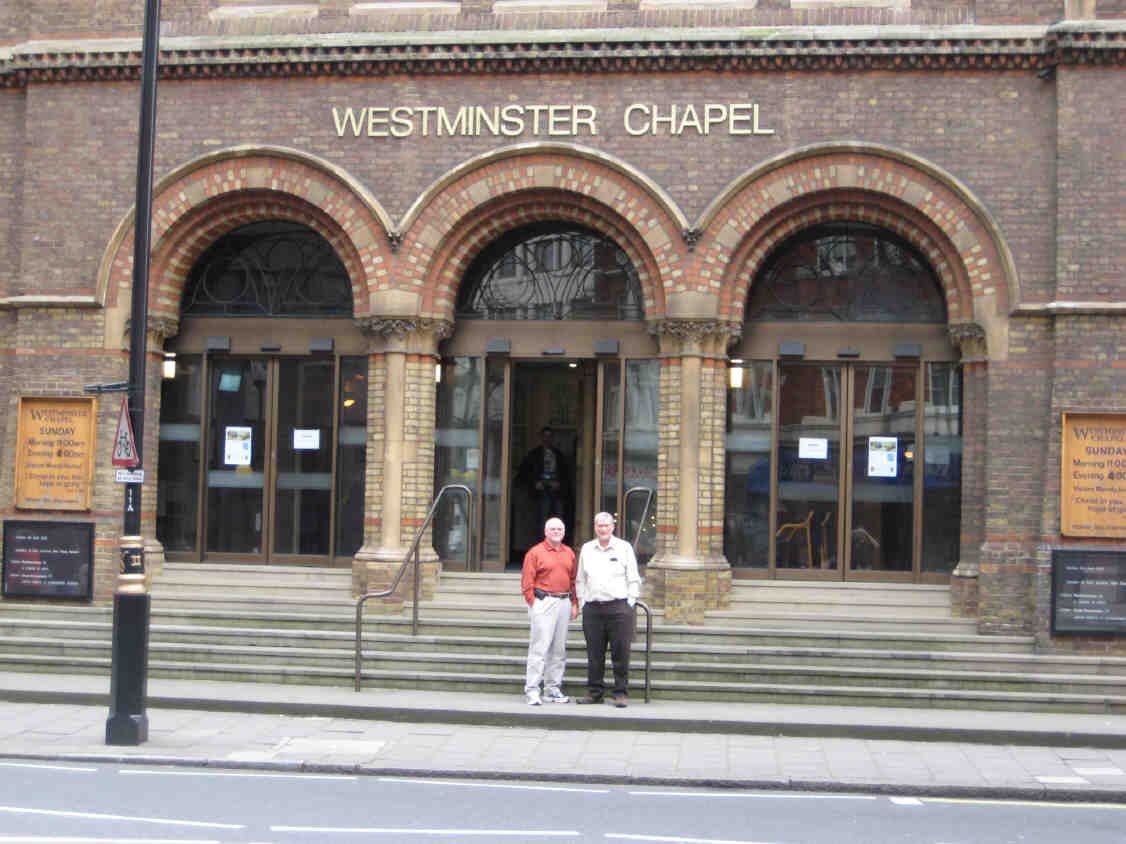 1. A photograph of Mike Zovath (our VP in charge of the Creation Museum operation) and me standing outside Westminster Chapel. This is a famous church that Campbell Morgan preached in for many years, and one of my favorite Bible teachers of all time, Dr. Martyn Lloyd-Jones, taught here for 30 years. We sell a number of Martyn Lloyd-Jones commentaries (they are phenomenal) in our Creation Museum bookstore. He is considered one of the leading expositional Bible teachers of the 20th century. 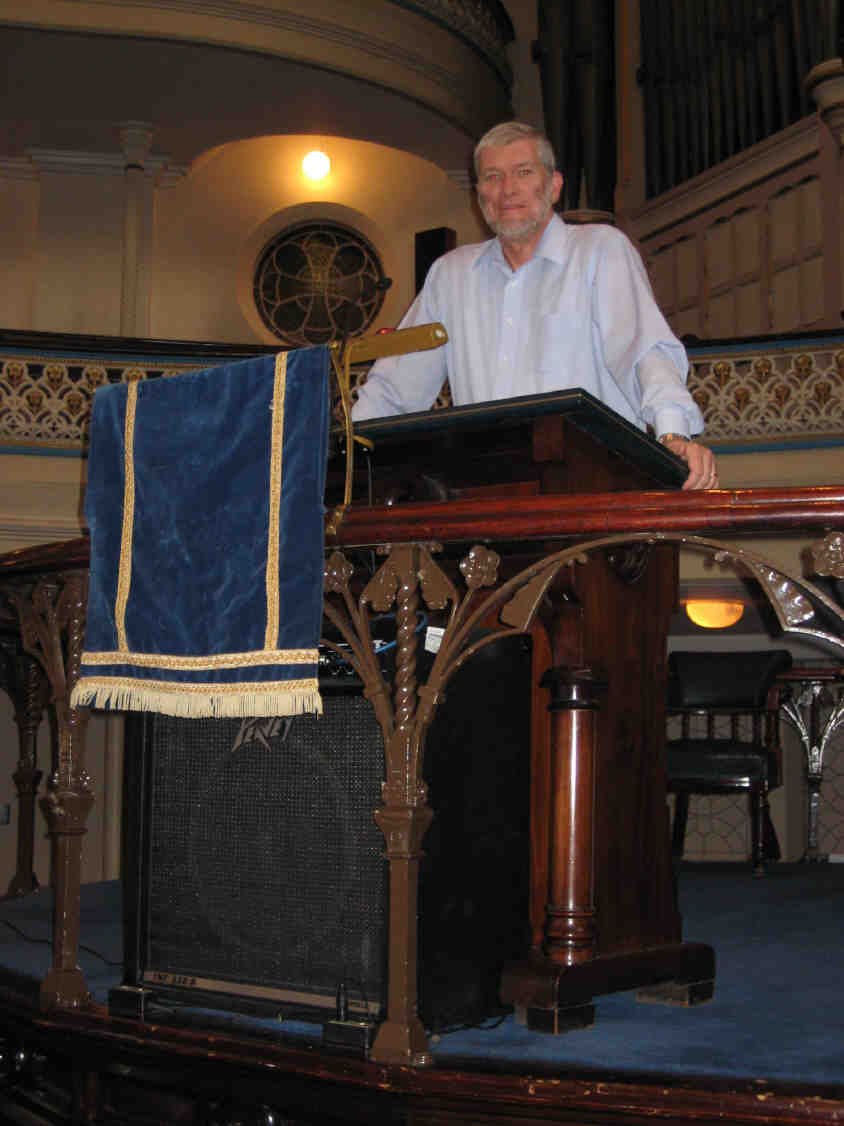 2. Of course, I had to get a photograph of myself standing in the very pulpit Dr Martyn Lloyd-Jones spoke from. As I looked out on the beautiful auditorium, I was reminded that in those days it was packed to capacity Sunday after Sunday. 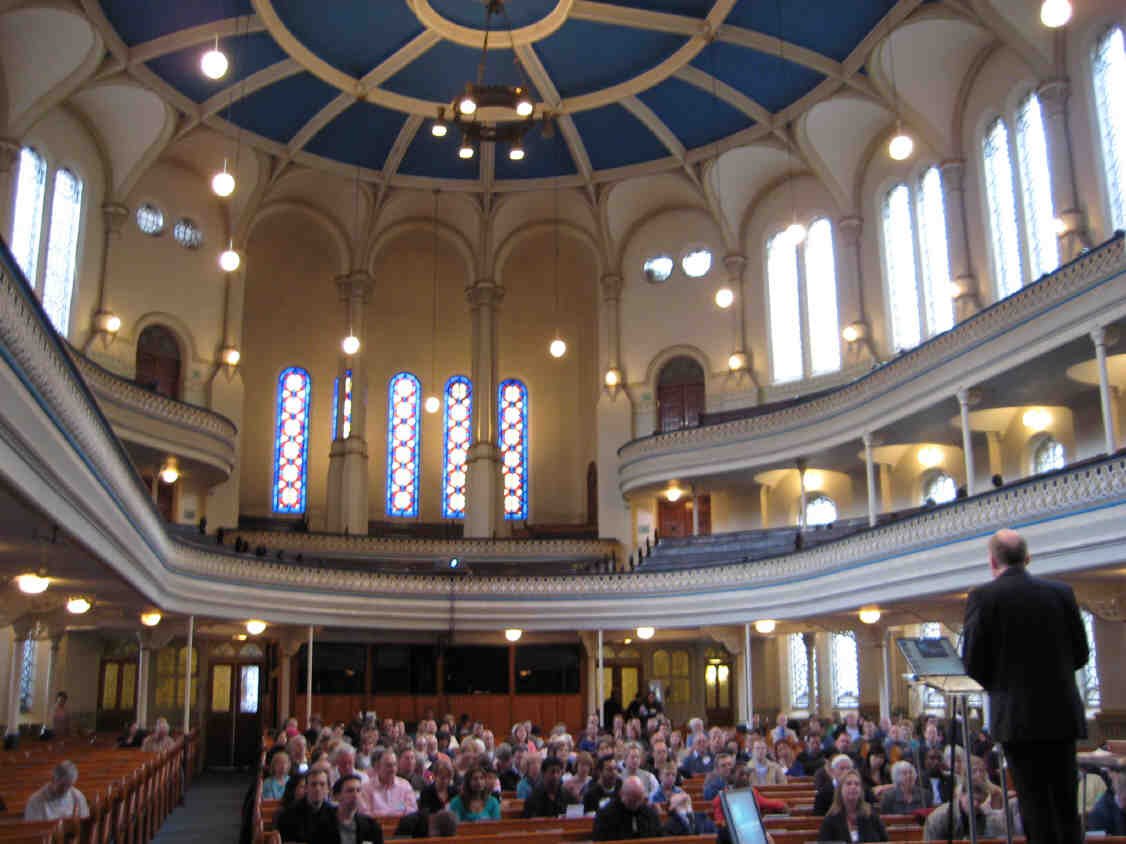 3. I have included a photograph of some of the people who attended the conference in Westminster chapel (my photos of the entire group unfortunately were blurred).

Frankly, it was a grueling 10 days—a different hotel every night, meals on the run, meeting so many people, setting up, speaking, getting to bed usually after midnight—then getting up early to travel to a different location, etc., etc. So, two weary travelers (Mike Zovath and me) got to Gatwick airport in plenty of time—3 hours ahead of our flight (it’s a very busy airport, and you should get there early). Then, a snowstorm hit London! They are not used to such major storms! (See the photographs.) 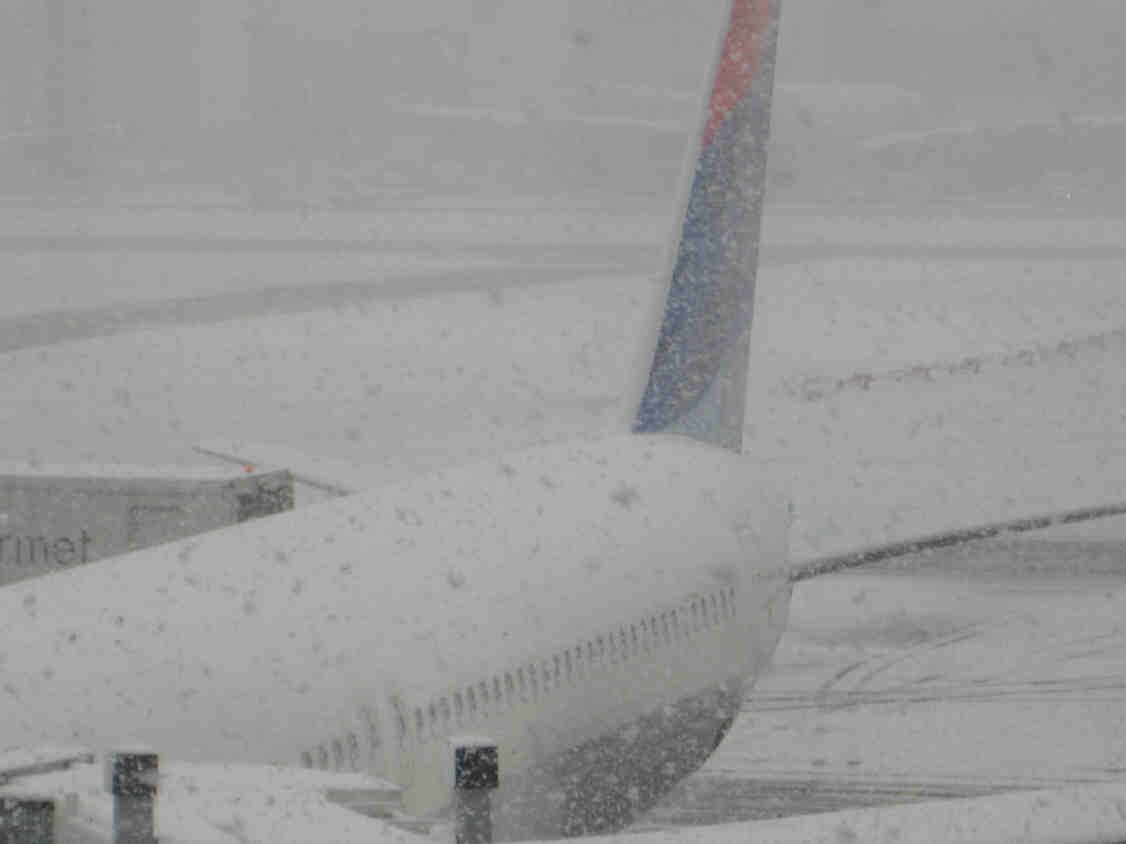 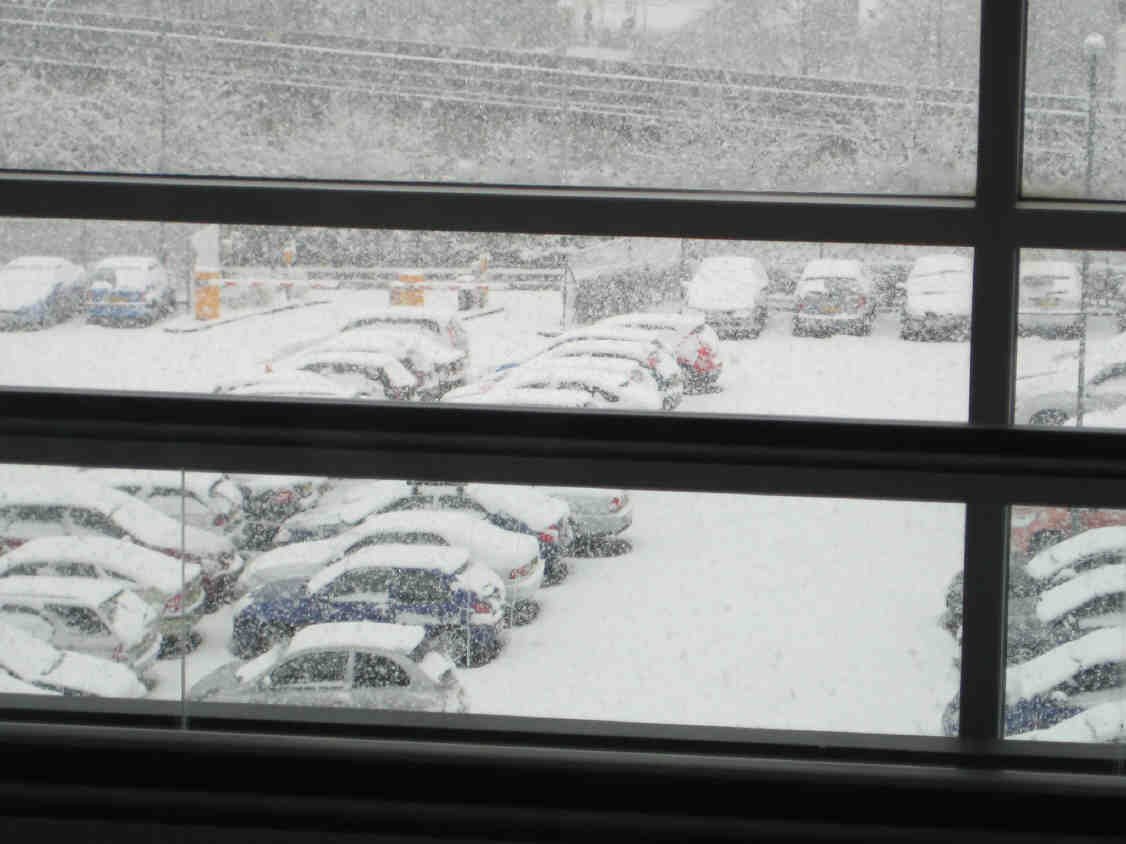 The runway had to be closed. After an hour delay, the runway opened, and we were boarded—but then we found out the plane had to be de-iced. The Delta pilots worked very hard to get us going, but they were frustrated by what seemed to us a total lack of readiness and organization at the airport. Apparently, only one outside contractor did the deicing—they had a truck that could de-ice one plane every 20 minutes, but then had to go and refill with liquid. And imagine how many planes were in line!

We sat on the plane, and sat, and sat—but I have to say that the flight attendants and crew were very professional. They did a marvelous job. We sat for 6 hours before finally the truck came to de-ice the plane. The pilots did not have much time left before they would become “illegal” (i.e., they can only be in the plane for a certain number of hours a day)—apparently we were within minutes of the flight having to be cancelled. Both Atlanta-bound flights were cancelled. But we were able to take off—nearly 10 hours late!

But to top it all off, after clearing customs in Cincinnati, we put our bags on a conveyor belt to take them to the main terminal. Well, I got to the terminal, got my bags, but Mike’s bag did not come!!! Somewhere between immigration and the terminal, the airport lost Mike's bag!!!

I wish I could share so much more regarding this trip, but it would take too long. Thanks for your prayers—and thanks for supporting AiG as we outreach around the world with the creation gospel message.

(Job 42:5-6) I have heard of thee by the hearing of the ear: but now mine eye seeth thee. Wherefore I abhor myself, and repent in dust and ashes.

The indication when we have progressed from hearing indirectly about the Lord from others to hearing directly from the Lord Himself is personal abhorrence. Thanks for stopping by and thanks for praying.