Some of you may remember the events of a few years ago when an atheist group opposed the rezoning of property where AiG was going to build the Creation Museum (the property was 20 minutes off the Freeway and AiG had plans for a 30,000 sq. ft. building, including offices). As a result of the atheists’ opposition, AiG lost the first piece of property. But what men meant for evil, God meant for good (remember Joseph). AiG ended up with a far superior property, right on the Interstate, right at an interchange—and ended up building a MUCH bigger Museum with a MUCH bigger vision, etc.

When I heard the same atheist group was going to protest the Museum opening, I remember saying to some of the secular media, “It will be interesting to see what good comes out of this also.” Actually, we’ve seen a number of positive things as a result of their protest—but the following is a very special testimony that has come out of the atheist’s opposition:

A Pastor from Russian-speaking Muldova met with our WorldWide Department today to discuss a translation ministry in his country and to see the Creation Museum (see photograph below of this pastor with Dr. David Crandall, Director of AiG’s WorldWide ministry). He first heard of AiG when he read in the newspaper about the atheist protesters who picketed our Museum opening. He told Dr. Crandall that if the atheists were so much against the Museum, it must be good. So he daily got onto the website and became a real fan of AiG. He pastors a church in Moldova that in 12 years has started 21 new churches. These churches were all asked to pray for him on the important day he visited AiG. He and his people believe that AiG and creation evangelism is the way to reach their country for Christ. He will be putting together a translation team to enable AiG do more Russian and Romanian translations. AiG is looking forward to a long and fruitful ministry with our new partners in Moldova. Thanks again to all the atheists that are helping us get the message of creation around the world. One of the verses of Scripture that has become one of my favorites is:

Genesis 50:20 “But as for you, you meant evil against me; but God meant it for good, in order to bring it about as it is this day, to save many people alive.” 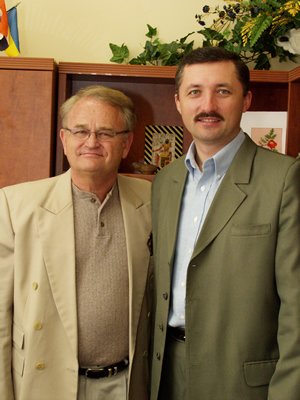 BUSLOADS COMING TO THE CREATION MUSEUM

The attached photograph shows just some of the buses on one day last week as BUSLOADS of people keep coming to the Creation Museum. Last night while my wife and I were out with friends at a restaurant in Indianapolis, I received a call from a newspaper reporter who is writing up a report to appear on November 28—the six month anniversary of the opening of the Creation Museum. And of course, part of the big news about this is that the number of visitors reached the number predicted for the year in just over 5 months!! (In under six months, total visitors is around 270,000—and growing!

I am writing this just after arriving home from Indianapolis where I spoke to hundreds of Lutheran teachers and pastors. What a phenomenal response from these people! So many of them thanked AiG profusely for enabling them to be able to teach students the truth concerning God’s Word, and to be able to teach them to defend their faith.