THE NEW ARABIC TRANSLATION We were thrilled this past week to receive the first copies of AiG’s ‘Dinosaurs and the Bible’ booklet printed in Arabic. Safaa Daoud Fahmi translated the book. AiG Wordwide, under the direction of Dr. David Crandall has numerous translation projects underway—AiG is reaching around the world. Praise the Lord. 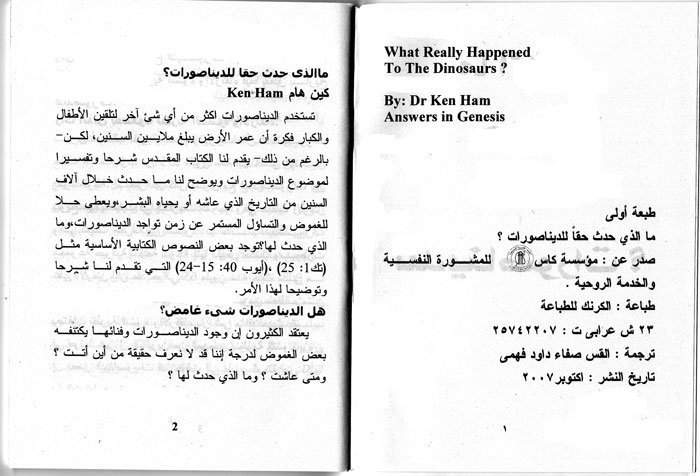 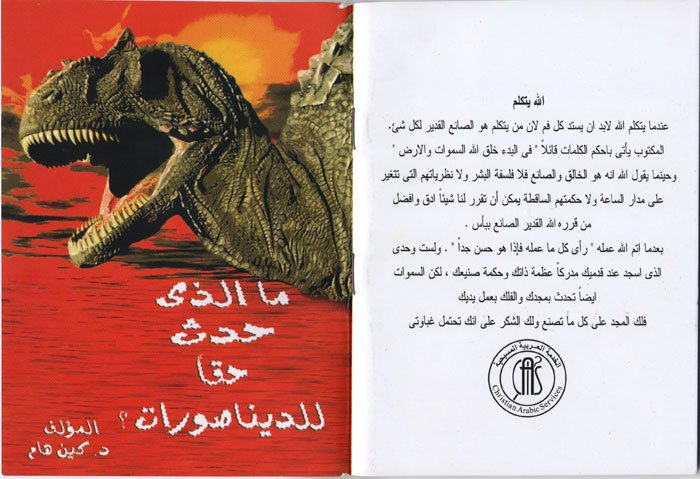 HOTEL SPONSORS CHRISTMAS SPECTACULAR The Creation Museum has organized a Christmas Spectacular—a NEW Planetarium program about the Bethlehem Star—choirs—AiG’s Buddy Davis in concert and holding workshops and many other exciting features. We are thrilled that a local hotel has agreed to sponsor (underwrite) this event. So we are thrilled to be able to announce that The Courtyard by Marriott in Florence---just a few miles down I-275 from the museum---is our event sponsor for our “Christmas Celebration” in December.

Here are some of the features of the Courtyard: *$79 SPECIAL Creation Museum Rate *Entire property is non-smoking *Breakfast is available on-site (not included in rate) *Conveniently located near a good variety of restaurants *Free Cincinnati Airport shuttle service *Free Internet access (wired and wireless available) *Microwave and mini refrigerator in every room

Here’s a link that provides some photos of the property: http://www.marriott.com/hotels/hotel-photos.mi?marshaCode=cvgfl&pageID=HWHOM Phone: 1-859-371-6464

To find out more about the Christmas Spectacular go to the www.CreationMuseum.org website for relevant information.

This is a testimony from a Museum visitor that shows the impact on local businesses:

We loved our trip to the Museum and it is such a blessing. The hotel where we stayed seemed to be filled with people going to the museum and we ate dinner at a local restaurant which also seemed to be filled with people who went to the museum – we kept seeing the same faces everywhere! Our waiter… hasn’t been to the museum yet, but said he really wanted to go. We really encouraged him. Our second evening eating there he told us that he was a Christian and was interested in what the museum had to offer. I hope he does go because I got the feeling that there might be an underlying need in his life.

Yesterday was another busy day at the Creation Museum. I spoke twice and met lots of people. There were a number of Christian school groups—one group drove 8 hours in vans to visit the Museum. I met some girls who came in a group from a home for troubled teens. There were a number of church groups. And so many told me they were going back to get their whole church to come and bring their neighbors, etc. A husband drove four hours to give his wife a surprise wedding anniversary present—she was so thrilled when she saw they were pulling up to the Creation Museum! Won’t be long and we’ll be up to 270,000 visitors. We believe it very likely we’ll reach or exceed 300,000 visitors by the end of the year.

Thanks for stopping by and thanks for praying Ken

Previous Article Hebrew/English New Testaments Given to AiG Next Article Does AiG Believe Evolution to be Foundational to All That Is Evil?