Note from Ken Ham: During my visit to the campus of Appalachian Bible College in West Virginia, I have asked Mark Looy to write a guest blog in my brief absence from the office -- Ken Ham ----------

Monday was a particularly memorable day at AiG and the Creation Museum, with a special honor bestowed on Ken Ham---which in reality was a recognition of the entire AiG ministry and the new museum.

We were honored with a visit by ministry friend Doug Phillips, president of Vision Forum in Texas. He personally surprised Ken---in front of the AiG staff---with a special sculpted bust, naming Ken as this year’s “George Washington Man of the Year” recipient, as designated by VF. Now, Ken knew that this honor (which he accepted on behalf of the entire AiG ministry) was to be given, but he was unaware that the Washington bust (with his name inscribed on it) was to be handed to him yesterday as the staff gathered in secret inside the museum's SFX theater. Many staff took note of the fact that Ken, an Australian, was being given an American patriotic award! 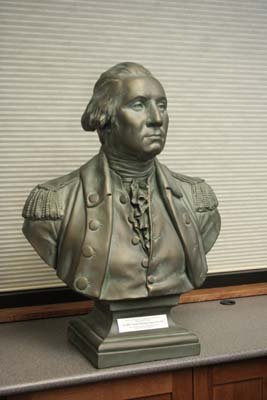 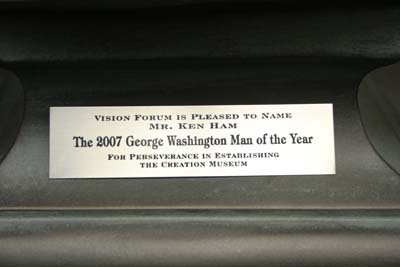 Doug had specially flown in from San Antonio with his wife and three of their children---along with his ministry's CFO Josh Wean and his wife---to honor the ministry and then spend the rest of the day enjoying the museum (as Ken made his way to West Virginia).

Doug described the museum as of “incredible excellence.” He was especially blessed by the “magnificent” planetarium program, telling us that as a fan of planetariums across the country, he has watched several shows over the years.

Doug’s interest in creation apologetics runs quite deep. He informed us that along with the influence of his father, the creationist classic book The Genesis Flood by Drs. Morris and Whitcomb is what God used to bring him to faith.

At the same time, the celebration on Monday morning was tinged with a somber announcement and prayer request: Doug shared with the AiG staff that one of his “spiritual sons” (and a key VF staff member), Michael Billings, had been buried last Friday after dying in a horrible car accident. To read about this tragedy, and to find out how to pray for the specific needs of the Billings family and the VF staff, go to Doug’s blog at http://www.visionforum.com/hottopics/blogs/dwp/2007/11/3118.aspx.

To listen to Monday morning’s special presentation, go to:

At the end of the day, AiG presented Doug with several copies of Ken's new book that explains why God allows suffering and death, How could a loving God . . . ? so that Doug could take them back with him to give to Michael’s family and friends that are especially struggling over the loss right now.

By the way, Doug will be one of the keynote speakers at next July’s apologetics conference (a family outreach) we are holding in Branson, Missouri. At this unique national conference (with even some sessions for ages 7--11), Doug will be joined by Ken, dynamic speaker Voddie Baucham, and our own Carl Kerby. We are taking registrations even now for this July mega-event at the 2,500-seat center we've rented, which is located just down the road from some wonderful family attractions and activities in Branson. See the webpage for details on the conference “Defending the faith in a secular America.”

As Ken states each time on this blog, please pray for AiG -- and this time please also pray for the Vision Forum ministry.