Oldest Visitor to the Creation Museum

To me, Tuesday's most-special museum guest is worthy of a blog entry:

The attached photo is of Mr. Israel Martin, probably the oldest visitor the Creation Museum has seen since we opened in May. He is 103. Over the years, Mr. Martin has operated Christian bookstores in both Canada (where he was born) and in southern Ohio. 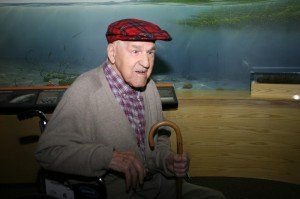 Some of Mr. Martin's earliest childhood memories are of newspaper accounts of the sinking of the Titanic (1912) and the exploits of Teddy Roosevelt.

When Mr. Martin arrived at the museum, he was expecting to see just a single room with exhibits. He was startled to see how much there was to this 65,000-square-foot center.

Over 260,000 have now visited the Creation Museum