AiG was the recipient of a real blessing this week. A group from Shepherds Ministries out of Wisconsin visited and shared with all the AiG staff. What a blessing—and I wanted you to also share in that blessing. You have a unique opportunity to hear a group of dear people, all with mental disabilities—but all gave their salvation testimonies, and two of them sang to the Glory of God. 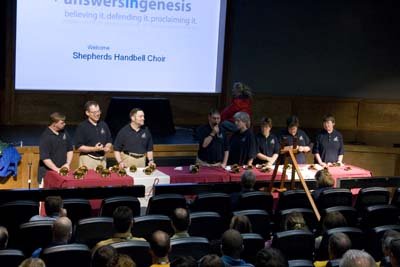 “In 1957 a Milwaukee area Sunday School Class had a vision. A family in their congregation had a child with a mental disability, and they saw a need to provide greater opportunities for other children and families. They began a Shepherds Sunday School Class and soon realized that God had mighty plans for them. As the Shepherds Sunday School class grew, this group of people began stepping out in faith. The committee began looking for land where they could expand opportunities for education and schooling for children.

In 1964, Shepherds Home & School opened its doors welcoming 36 children. There was a program in place to educate and train children. Many children learned to read and write that prior to living at Shepherds had no opportunity to learn such skills. As the children became teenagers, the schooling began to include job training. Since then, many of those children and teenagers have grown to adulthood and still reside at Shepherds. In the transition from children to adult residents, there was less focus on schooling and more focus on vocational training. At this time, Shepherds Baptist Ministries, Inc. and SERVE Enterprises, a division of Shepherds, work together to provide compassionate Christian care and vocational training for adults that have mental disabilities.”

This group from Shepherds who visited us is a handbells group (see photograph of group taken in AiG auditorium). They were going to play for the staff, but they accidentally left their music in their hotel room. So, instead (and this was obviously a blessing from the Lord), the group leader had the men and women share their testimonies and asked two to sing for us.

I must admit, this was one of the most touching staff meetings we have ever had. I believe you will be both blessed and challenged if you listen to these men and women who are mentally handicapped, share as they did. What a reminder to thank the Lord for all He gives us. I urge you to listen to this unique morning we had at AiG:

I am in Orlando, Florida, getting ready for two days of speaking at a Christian schools conference. Please pray for this time.