We receive a number of communications from teachers who do teach their students about creation and problems with evolution.  There are probably more such teachers in the schools in America than we realize—however, they have to stay “undercover” as the ACLU would no doubt launch a lawsuit if they even sensed this was going on.  Here is a typical sort of email we receive from such teachers:

I'm a creationist teacher…. Looking through the grade six science book (Houghton Mifflin) I noticed that there was a unit which included evolution. I'm praying about how to deliver the classes when time comes to cover that unit. I plan to teach the basics on evolution but give the children both sides of the story. Your website is giving me a lot of help and encouragement. Please keep it up and pray for me as I head into this challenge.

THE GOD OF GEORGE BUSH?

Worldnet daily has a report purportedly quoting what George Bush stated concerning the God He believes in.  The report states:

President George Bush  has repeated his belief all religions, "whether they be Muslim, Christian, or any other religion, prays to the same God" – an assertion that caused outrage among evangelical leaders when he said it in November 2003. Bush made the statement Friday in an interview  with Al Arabiya  reporter Elie Nakouzi. Al Arabiya is Al Jazeerah's top competitor in the Mideast. As the president and Nakouzi walked from the Oval Office to the Map Room in the White House residence, Nazouki asked, "But I want to tell you – and I hope this doesn't bother you at all – that in the Islamic world they think that President Bush is an enemy of Islam – that he wants to destroy their religion, what they believe in. Is that in any way true, Mr. President?" "No, it's not," said Bush. "I've heard that, and it just shows [sic] to show a couple of things: One, that the radicals have done a good job of propagandizing. In other words, they've spread the word that this really isn't peaceful people versus radical people or terrorists, this is really about the America not liking Islam. “Well, first of all, I believe in an Almighty God, and I believe that all the world, whether they be Muslim, Christian, or any other religion, prays to the same God. That's what I believe. I believe that Islam is a great religion that preaches peace.”

You can read the entire report at worldnetdaily.com.

MISSIONARIES TO A “PAGAN CULTURE”

This morning, as I often do, I commenced my teaching session at Grace Fellowship Church in Florence, Kentucky,  by telling them that Mally and I and our family came to America over 20 years ago as “missionaries to a pagan culture.”  The people laugh of course—recognizing that America is quickly becoming a pagan culture—and that America does need missionaries to evangelize the church and culture.  This comment of mine was very apt in this particular church, as they generously financially support AiG each year as part of their missions budget.  AiG is considered to be a missionary organization that the congregation supports.  We praise the Lord for the pastor (Brad Bigney) and the church leadership who really do understand the nature of the ministry of AiG and the Creation Museum.

I spoke to over a thousand people this morning.  There are also many visitors.  Some who visited the Creation Museum yesterday (e.g., one family from Wisconsin) attended this church this morning.  One man (from a Mennonite community) told me he drove 150 miles to attend today’s meetings.  I also heard about a girl who became a Christian after going through the Creation Museum and then seeing “The Last Adam” presentation of the gospel.  Praise the Lord for all the testimonies as to how the Lord has used AiG and the Creation Museum in people’s lives.

I’ve attached two photographs taken at church this morning while I was speaking. 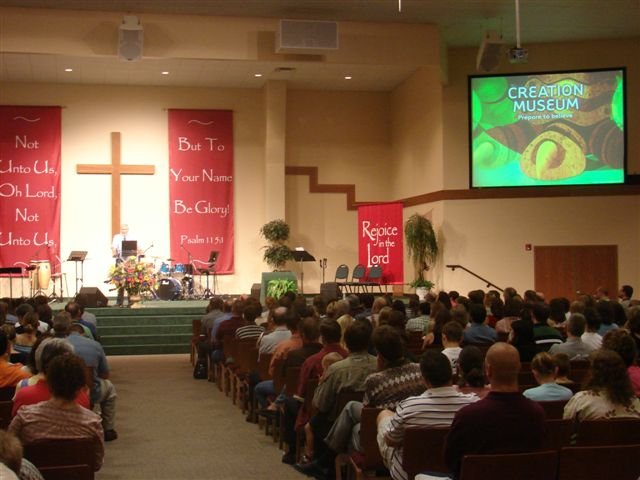 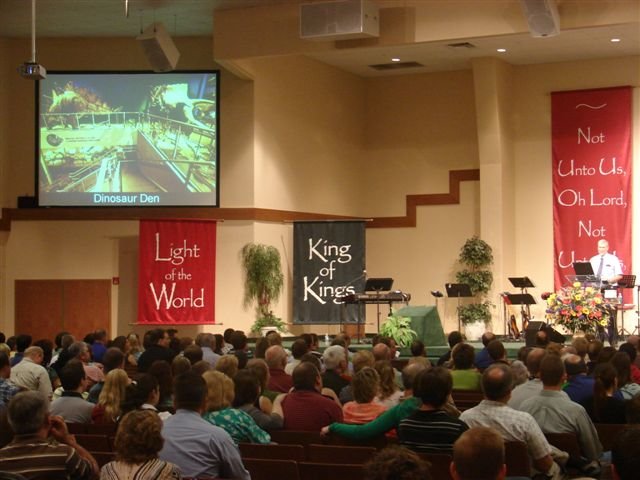 Previous Article Heresy and Blasphemy in the Cincinnati Post Next Article Does the Bible Condemn Homosexual Behavior?