It was such a thrill on Friday to spend time with Michiko and Kazue from Japan. In a country where less than 0.1% are Christians, these two on-fire-for-the-Lord ladies came to learn all they could so they can win others for the Lord in Japan. Michiko works in the Creation ministry in Japan, which is now following along the lines of the AiG philosophy, regarding standing on biblical authority and proclaiming the gospel—instead of just focusing energies, funds, etc. on scientific arguments. At AiG, we certainly use a lot of science, even having a new Research Division—but all of us recognize that our overall thrust must be to proclaim the gospel and stand on God’s Word.

These two Japanese ladies are so burdened for their country of Japan. What a testimony to me and a reminder of how good we have it in the USA, even with all the evil things going on around us. What a reminder as to how important it is to focus on the Lord and proclaim the gospel—and not just focus on ourselves and our selfish demands. To these two ladies, just like the apostle Paul, they count everything else a loss, except to know Christ. That’s what this ministry is all about—and that’s what the Museum is all about. Not just to build something as a monument—but to do something that reaches people with the gospel.

I have included a photograph taken in my office of (left to right) Mark Looy, Kazue, Michiko, Ken Ham. 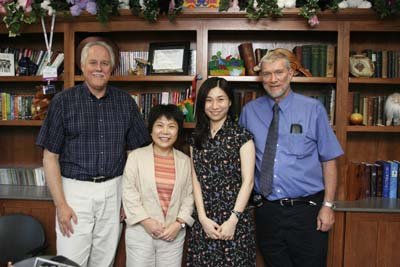 I called one of our supporters to thank them for their donation today, and he said something like this: “There are lots of ministries to give to, but I want to give to a ministry that ‘enlarges heaven’—a ministry that the Lord uses to save people. We do receive numerous testimonies of salvation as a result of the Lord using the AiG/Creation Museum ministry.”

Dr. Kiyoshi Takahashi, president of Creation Research Japan (CRJ), and his wife had planned to attend the ribbon cutting ceremony on 26th, May, 2007, to congratulate the Creation Museum. They bought flight tickets and booked hotel and everything, but just a couple of weeks before the date, his 96-year-old mother’s health condition became unstable, so they had to cancel their trip. Dr. Takahashi had planned to present a Japanese-designed clock (see photograph) as a gift from CRJ (Creation Research Japan) to AiG; but this time, Kazue, a new board member of CRJ, and Michiko, operation manager of CRJ, were able to present it to Mr. Ham.

Kazue, who is a housewife and a layman evangelist, heard Ken speak in 1996 in Tokyo. Also she visited during an AiG conference in 2003 and saw the ground work of the museum. Since then she has been praying for the Museum, and it was her dream to see it come true (she is also a life-time charter member). She came all the way from Japan just to visit this museum and was very happy to see how many people and children are visiting this museum.

I included some photographs of the special gift being presented to us in the lobby at the Creation Museum—and photographs showing close-ups of this beautiful present. 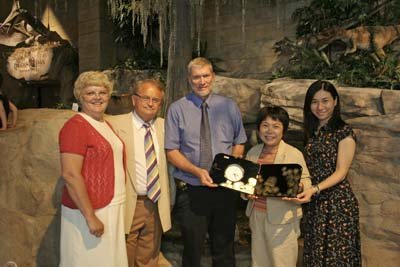 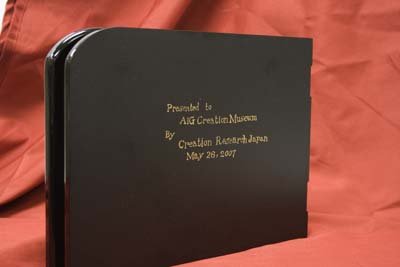 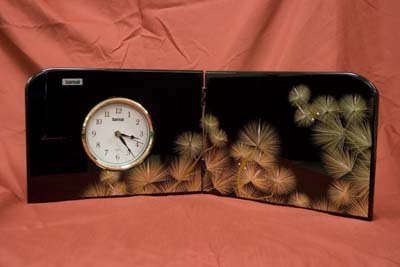 I am so thrilled to see the way the AiG Worldwide ministry is maturing under Dr. David Crandall. There are many translation projects in the pipeline, and special video productions underway (such as the series being videoed in Saipan this fall to reach the Chinese people).

AiG’s philosophy is to bring pastors and Christian leaders from countries to AiG/Creation Museum, train them, supply them with materials and send them back to their home country—and continue to liaise with them to be a resource to enable them to reach their countrymen with the gospel. AiG is also filming video projects to be translated into other languages, and then supplying the DVD masters to people in that country to copy and distribute. The AiG Spanish videos are now available—early next year, the Chinese videos will be available—and it looks like the next language will be Japanese.

When Michiko visited this past week, she told us that everyone in Japan has heard about evolution. In fact, she said evolution is so taught as fact, and so popular, that the words “evolve” and “evolving” are used all the time in the culture in regard to all sorts of things. She also said that her boyfriend was a Christian, but after watching one of AiG’s videos, he became an on-fire Christian like never before—and he found that when he conducts Bible studies that by beginning in Genesis is MUCH more successful in reaching people than just starting in the New Testament as many missionaries/pastors do.

Please pray for AiG Worldwide, that the Lord would enable AiG to reach many more around the world with the creation/gospel. More and more mission organizations are realizing how important it is to train nationals to reach their own countries.

The more AiG concentrates on what the Lord has called us to do, and provides resources and training for others, the more the Lord will use this ministry to reach millions.

2800 at the Creation Museum on Friday (LONG LINES (see photograph), but the wait wasn’t long as Creation Museum staff are working out ways to streamline things. Saturday is expected to be like last week (3200 last Saturday—almost 70,000 since opening week). 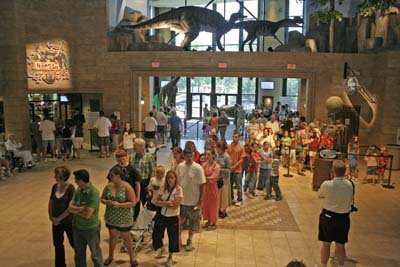 Praise the Lord SO MANY are interested in the Creation Museum. Despite some negative news articles from Christians and non-Christians, the attendance continues to grow and “blow us out of the water.”