The Answers Correspondence Department informed me today that they have now received emails from 89 countries. Two new ones were added in June 2007—the Federated States of Micronesia and Vanuatu. The Answers in Genesis website continues to grow dramatically in the number of people accessing articles, contacting AiG, using the bookstore, and so on. As the largest creation/worldview/apologetics organization in the world, we are thrilled that the AiG website is being contacted by people in more and more countries—thus many more being influenced by the creation/gospel message.

It was thrilling to see this press release in the Christian Post.

The controversial $27 million Creation Museum located just outside Cincinnati has made a fairly strong start, boasting 40,000 visitors since its opening on Memorial Day. 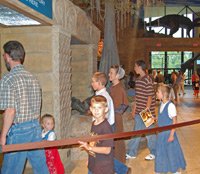 Patrons enter the Special Effects Theater for a film presentation at the $27 million Creation Museum, which depicts a literal six-day account of creation. In its first month, 40,000 people made their way to the museum.Related Counting the 9,000 visitors that pre-visited the museum, which depicts a literal six-day interpretation of creation from the Bible, the founding ministry Answers in Genesis (AiG) is well on its yearly goal of 250,000 guests, already meeting one-fifth of the total target. Organizers are excited about the faster than expected pace, and hope the turnout continues on its current trend.

“We’re very thankful that so many people are coming out,” explained Ken Ham, co-founder of AiG, in a statement. “The feedback we’ve been getting is very positive. I’m grateful to observe that people are seeing that solid science backs the Bible.” The museum, located in Petersburg, Ky., sparked much discussion in the past months when word got out that a Genesis-themed exhibit was going to be built. Evolution is derided at the 60,000-square-foot facility, packed with high-tech exhibits designed by an acclaimed theme-park artist, animatronic dinosaurs and a huge wooden ark. In this literal biblical version of history, dinosaurs appeared on the same day God created other land animals.” Read the entire report at:

The same press release appeared in a number of Christian (and some secular) news sources.

“I’m a technical editor…My job is to help authors (engineers) prepare their reports for approval. Because of what we report on, literally millions of dollars and human lives depend on our accuracy. So, we try to be careful. Sometimes Christians (and I claim to be one) discourage me because they (myself included) often don’t show as much care in knowing and reporting truth (from the Bible and elsewhere) as my non-Christian co-workers show when we try to report truthfully about things that ultimately won’t matter much. I just wanted to let you folks know that I notice appreciate your excellence in the little things (grammar, spelling, etc.) and I am very impressed with the consistency of message I’ve noticed during the time that I’ve been visiting your site. How do you guys do it?”

Over 2,100 at Creation Museum Monday

Probably because it is July 4th week, Monday turned out to be yet another record day at the Creation Museum—over 2,100 on a Monday (usually a lower day). I went out and met a number of people as they waited in long lines. One person said to me, “Usually I get mad when I have to stand in line for a ride at a Theme Park—but I’m THRILLED to be in line here at the Creation Museum knowing so many people want to go through this place.”

Well—thanks for stopping by and thanks for praying.