AiG conference in Texas packed out!

Friday evening saw an overflow crowd at Calvary Baptist Church in Beaumont Texas. But I have good news and bad news. The bad newsI came down with a terrible stomach flu on Friday afternoon and had to cancel out of a radio interview and my speaking Friday night! The good news is that Dr. Terry Mortenson was with me so he did the radio interview and gave a talk in place of me Friday evening. I remember once when I was stuck in an airport because of flight cancellations, and someone handed me a little cartoon that read: "Predestination: Where you are when your flight is canceled." So I guess I could re-write that to say Predestination: When your stuck in a hotel room with stomach flu without your wife to look after you! Anyhow, I crawled to the seminar on Saturday and gave my two talksa lot of people were praying for me.

We had some great feedback. One 14 year old boy told me how much this ministry meant to himhe purchased The New Answers Book and couldnt wait to get home to read it. A pastor came and said he saw the need for Creation Evangelism in the community, but needed pointers on how to do it. Many other people lined up to speak to Terry and myself. It was very encouraging.

AiG FROM THE AIR 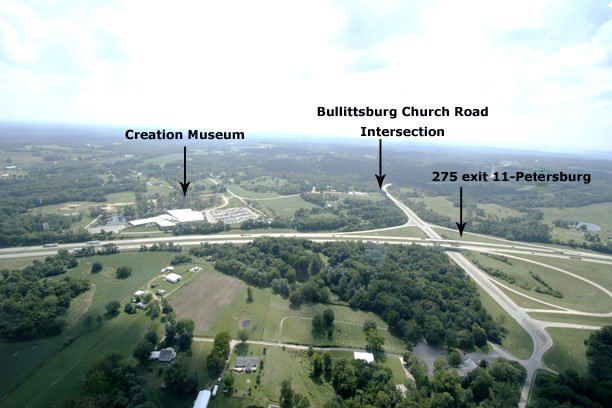 Ive enclosed a photograph of the AiG complex taken from the air recently.

Could this happen in America?

A Canadian news source has reported:

A Kamloops (British Columbia) City Council member will pay a hefty fine and also apologize for comments he made about homosexuality at a public meeting last summer. Those comments by the local politician led to a complaint being lodged with Canadas Human Rights Commission and could have proceeded to a tribunal.

LifeSite News reports that John DeCicco, who is Catholic, made the remarks at a Kamloops City Council meeting in June of last year and repeated them to the media afterward, saying that homosexual acts were "not normal and not natural." A homosexual activist couple filed the human rights complaint against him in August. DeCicco has now decided to accept a $1,000 fine and make a statement of apology in order to avoid a Human Rights Tribunal hearing. However, the Catholic city official says his opinion has not changed

The news source also has a warning for Americans:

Americans for Truth president Peter LaBarbera says his group is warning Christians in the United States that they may face a choice similar to the one DeCicco faced if they allow hate crimes legislation to supplant the First Amendment. "Were saying to American pastors and American politicians, What would you do if you were fined a thousand dollars for saying that homosexual behavior is not normal and is not natural ? LaBarbera notes.

It really is worth reading the rest of this article at : http://www.spcm.org/

IT PAYS TO DO THINGS GODS WAY (with gentleness and respect! Peter 3:15)

I want to share a neat story. Today I met with my daughter's 1st grade teacher about a statement she made in class that people did not live when dinosaurs were on the earth. She is an effective and seasoned teacher, and a devout Christian. She said she tells children dinosaurs lived "millions" of years ago. I politely objected, based on Genesis 1. She asked what would be a more acceptable statement for her to use in future classes. I said "thousands, or lots". She readily agreed to exclude the term "millions of years". She also eagerly accepted the booklet "What Really Happened To The Dinosaurs?" and asked if she could share it with the other first grade teachers to re-think how they present the subject of dinosaurs! Praise the Lord God, who answered to my prayer for wisdom to proclaim truth with grace. Our conversation was conducted in mutual Christian charity, and I was pleased with the outcome.

In the near future I will be speaking at a church in West Melbourne, Florida (see event here).

I received a very encouraging email from a supporter who attends this church that I thought you would enjoy reading:

Rob and I have supported AiG for about a year. Ken, I'm sure you don't seek the celebrity, but you have shown us such a profound truth which has brought us so much closer to Yaweh that we can't help but look up to you quite a bit. Now we find out that you are coming to our church, Calvary Chapel in Melbourne, Florida next month!! We can't be more thrilled. I wish we could invite you to dinner with us. It would be a true honor to meet you in person and be able to chat with you. But we will be content to hear you share your message in person.

We have already passed the event on to our family members and friends who don't know this truth. We are praying they will come. God almighty is on the case and we know His will is for all to hear the truth. May He bless your travels and the words that come from your mouth. Amen, Rob and Frany B.

WellIm not sure what my schedule is like until I get back to the office, but often we try to arrange a dinner or dessert with supporters when I go to an areaIm not sure if we can do this in Florida, but I will check and see.

As of February 1 this year, the number have countries from which people have emailed the ANSWERS DEPARTMENT for answers to questions is up to 75. The new countries during the month of January 2007: Azerbaijan, Ivory Coast, Liberia, and Namibia.

Previous Article Answers for the World--coming to a library near you? Next Article Struggling with the origin of races