Ken Ham and AiG on HBO?

I urge you to read our front page web article today on a documentary to be aired on HBO which will include segments for which I was interviewed. Mark Looy, AiG's Chief Communications Officer wrote the front page article which begins:

Tonight on HBO, "Friends of God: A Road Trip with Alexandra Pelosi" will premiere. Her last name may sound familiar -- earlier this month, her mother, Nancy Pelosi, became the Speaker of the House of Representatives (the first woman to hold this very powerful political post). Knowing that Alexandra's mother does not share AiG's opinion on moral issues (e.g., abortion, "gay" marriage, etc.), plus the fact that she might sell her documentary to HBO which is known for some highly objectionable programming, AiG had to weigh the pros and cons of participating in her documentary. In initial contacts, AiG found Pelosi and and her co-producer (now her husband) to be earnest and well-intentioned (which was borne out later when they met and filmed AiG President Ken Ham). Prayerfully, we took the plunge and agreed to go on camera

By the way, we are not necessarily encouraging you to watch "Friends of God" on HBO. It's a premium channel known for profane language, nudity, and graphic violence (though we doubt this documentary will have any of those elements). We'll post a review of the documentary very soon on this website.

You can read Mark Looys entire article: Friends of God--AiG on HBO.

This documentary to be shown on HBO is already hitting the news headlines, for example from YAHOO news:

LOS ANGELES (Hollywood Reporter) - Alexandra Pelosi, speaking about her documentary on red state evangelicals, said it's possible for everyone to get along if we can get past the hot-button issues of abortion and gay marriage. She may be overly optimistic. The daughter of House speaker Nancy Pelosi (news, bio, voting record) traveled the Bible Belt to bring back footage of fundamentalist worshipers, as well as Christian miniature golf courses, wrestling federations, car clubs and theme parks the parts of the film that were most troubling were not about abortion or gay marriage or even the incredibly pathetic attacks on evolution. Rather, it was the willingness of evangelicals, young and old, to accept as figurative and literal gospel anything and everything fed to them by authority figures. They appear as automatons, unable or unwilling to question the pronouncements of their leaders.

You can read the entire story at: http://news.yahoo.com/

Today I had the privilege of hosting a unique guest at Aig, Dr. Carl Werner (see photograph of Dr. Werner as he spoke to staff in a packed out Nehemiah Room) and his wife Debbie. Dr. Werner and Debbie have traveled the world obtaining photographs and video footage from Natural History Museums. The photographs are being compiled into a series of books that will clearly illustrate powerful evidence against evolution. Dr. Werner is also producing a series of videos with incredible quotes from evolutionists! AiG is working with Dr. Werner to see his material is produced in the near future. 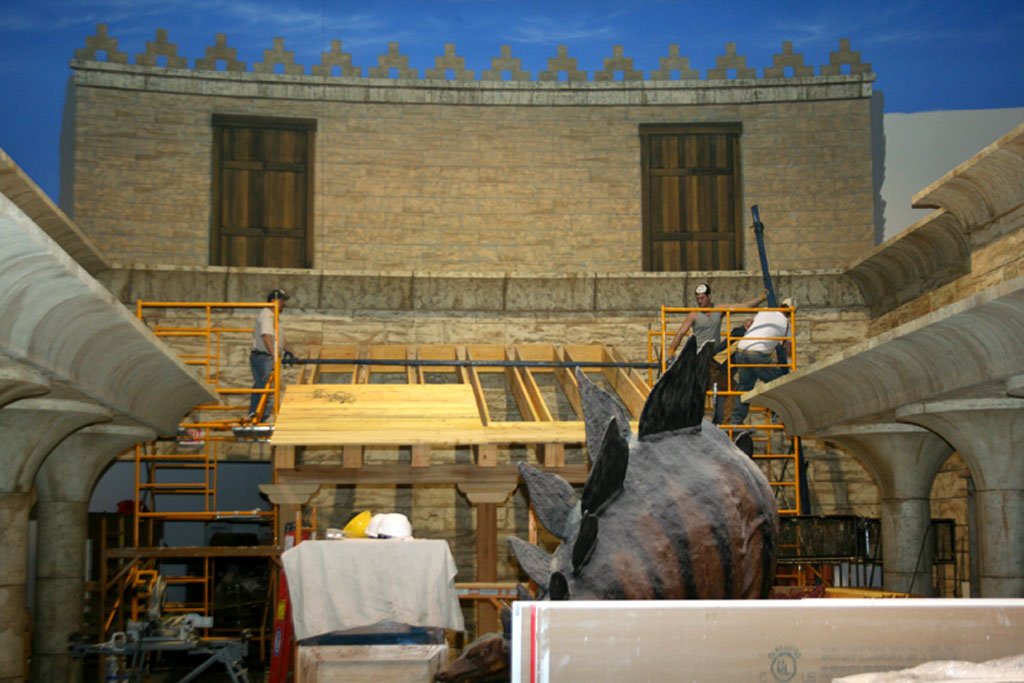 Ive enclosed a photograph of the Palm Plaza area (at the end of the Creation Walk and Consummation Theater) showing the section where the coffee shop will be located.

Tomorrow I will speak at a pastors luncheon at AiG (over 75 will be in attendance) and then spend time with a Christian radio reporter as we walk through the Museum construction recording a program for broadcast. Today I also was interviewed by a newspaper reporter in preparation for the AiG conference in Beaumont Texas in early February.