The Bible is true

It is so encouraging to get reports like the following. Terry Mortenson sent this after a recent speaking engagement:

That evening I spoke on dinosaurs. I answered questions from the audience for about 40 minutes afterwards and most people stayed for that time. After that, several came up and thanked me for the lectures. A couple of men especially appreciated the way that I handled the questions. A biology professor came up to me and thanked me for the thought-provoking lectures.

After everyone had gone except for the pastor and his wife, [my wife] and I stood and prayed with them. They said that they would like to think about having another seminar in a couple years while people still remember the impact of these lectures. I suggested that they look at doing a city-wide seminar involving several churches, and the pastor said we need to try again to get a lecture or two on the EIU campus to reach more students. So, well see where the Lord takes things. What a contrast between the reaction of a person who realizes he or she can believe the Bible and what is stated below in the excerpt from Richard Dawkins new book, The God Delusion.

Atheist and evolutionary spokesperson Richard Dawkins from Oxford University has written a new anti-Christian book. Here is just an excerpt from his bookwhich also illustrates how he sees compromising theologians and those who inconsistently choose which parts of the Bible to take as written:

Begin in Genesis with the well-loved story of Noah, derived from the Babylonian myth of Uta-Napisthim and known from the older mythologies of several cultures. The legend of the animals going into the ark two by two is charming, but the moral of the story of Noah is appalling. God took a dim view of humans, so he (with the exception of one family) drowned the lot of them including children and also, for good measure, the rest of the (presumably blameless) animals as well.

Of course, irritated theologians will protest that we don't take the book of Genesis literally any more. But that is my whole point! We pick and choose which bits of scripture to believe, which bits to write off as symbols or allegories. Such picking and choosing is a matter of personal decision, just as much, or as little, as the atheist's decision to follow this moral precept or that was a personal decision, without an absolute foundation. If one of these is 'morality flying by the seat of its pants', so is the other. In any case, despite the good intentions of the sophisticated theologian, a frighteningly large number of people still do take their scriptures, including the story of Noah, literally LIBERTY MUTUAL DESSERT 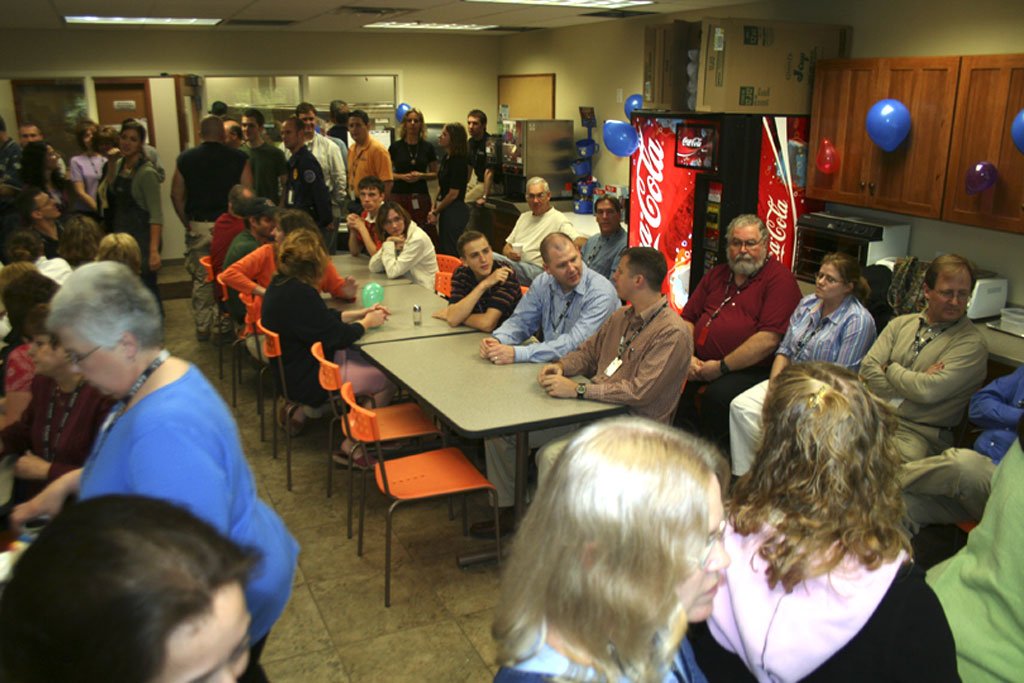 The AiG staff was provided with dessert Wednesday afternoon, courtesy of Liberty Mutual, as part of "staff appreciation week." I have enclosed some photographs of the event.

On Thursday morning, all of the staff will gather for our annual staff photograph. This will be produced on a magnet and sent to supporters to remind them to pray for us.

I am a new Christian (3 months), and I just have to say that I think your radio program is really serving God. You have answered many questions that I had in my mind, but didn't want to bother others about. Please keep up the good work. I look forward to hearing you on the radio every time that I listen. God Bless You.

Lets specially pray for Richard Dawkins this week, that the God he fights against so vehemently will open his eyes to the truth.