Dr. Monty White, CEO of the AiG UK ministry sent the enclosed photograph with this caption: 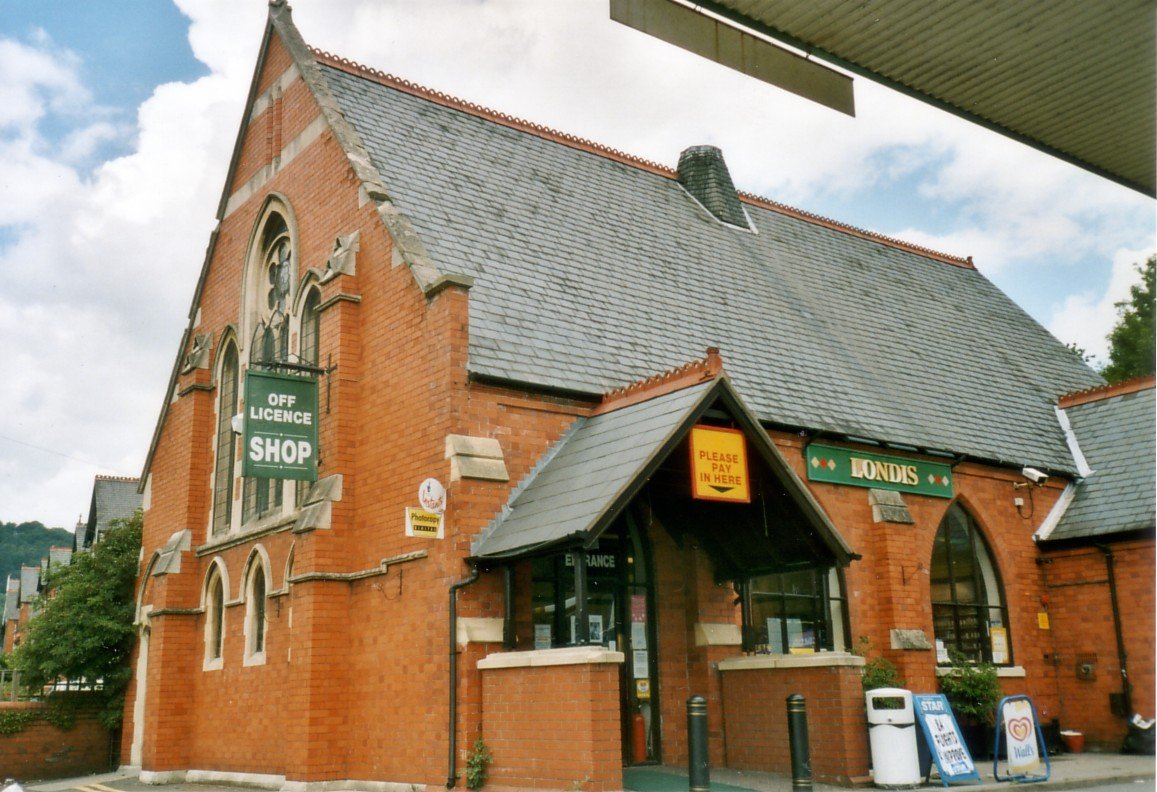 "It is of a church in Llangollen (it's difficult to pronounce, so just say 'in Wales') which has been sold and is now used as a liquor store. We saw it on our holidays—It just shows you the decline in church going and the closure of churches that is happening in the UK."

This afternoon, an enthusiastic young lady visited AiG. She has just graduated with a science degree from a university in Ohio. Next week she leaves for the UK for one year to work in Liverpool as a missionary to students with Campus Crusade. She told me she heard me speak when she was a young girl and she has never forgotten it and has always been interested in AiG's ministry. She said she would love to work for us when she returns (or even do more study first if that is necessary). She said she understood that the UK was now very pagan and she has a heart to reach people with the gospel. I gave her all the contact information for AiG UK—she will make contact with Monty White as soon as she can.

"My 4 talks went well yesterday. Lots of encouraging comments. My two school talks and two talks tonight (Monday) at church have been obviously cancelled as we prepare for hurricane Katrina to pass over us starting in the afternoon (with gusts estimated at 100 mph). I don't know if my flight will leave tomorrow morning. I am waiting out the storm in a private home with the assistant pastor and his family.

As I told my audience last night as I spoke on Noah's Flood, this catastrophic hurricane is like a Sunday school picnic on a sunny day compared to the violence of the year-long Flood. The headlines of the Jackson paper this morning reads 'UNIMAGINABLE!' This storm will leave incredible evidence that it occurred. But the geological record of thousands of feet of sedimentary rocks and billions of fossils is the awesome evidence of the INFINITELY MORE UNIMAGINABLE catastrophe of the Flood."

Thanks for your prayers. Terry PICNIC VIDEO

If you want a good laugh, watch the video of the pie eating contest (which includes some great shots of Mike Zovath—VP in charge of the Museum). To watch video go to this link:

Today, representatives of the company contracted to produce the sixty or so videos for various exhibits at the Creation Museum met with various Museum personnel—they will be meeting for two days to finalize the production schedule etc. Also, don't forget to keep up with the museum on their new blog!

Well, my worst moment today was when I was mowing the lawn and my lawn tractor knocked down the largest wasp nest I've ever seen—about the size of a pumpkin! Suddenly I saw billions (well, it was a lot anyway) of wasps heading for me—so I took off on my tractor (now that was a sight—me on a tractor trying to out run zillions of angry wasps)—I only got stung a couple of times—but I went back with some spray and now there are fewer wasps on the earth today!

Thanks for stopping by and keep praying for AiG!