A New Island at AiG

AiG looks like a construction site again, as various contractors and staff are involved in many different areas working to complete the plans for inside and outside the building. A number of pieces of heavy machinery have been working around the lake constructing drainage, ponds and waterfalls, and even an Island (see photograph) near where another bridge will also be constructed. 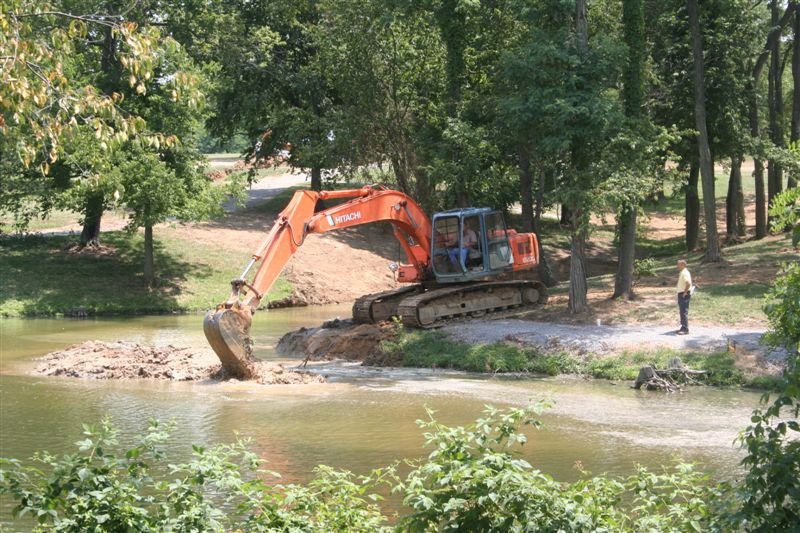 As I was driving out of the office today I also observed many volunteers (we have mission teams and others on-site right now) watering plants (things are very dry right now--we do need rain), mowing and doing great work around the property.

Usually on Thursdays, we invite a guest speaker (Pastor or Christian leader) to address the AiG staff from 8:30 am--9:00 am (our usual staff devotion and prayer time). This morning, because I've been away for a few weeks, and will not be spending much time in the office for the next month, I addressed the staff with a message based on Isaiah 55:8-9 (God's ways are higher than our ways). We looked at what this means and then I applied it to the history of AiG and how God has led over the past 30 years.

We started our staff meeting this morning with prayer for the United Kingdom in light of the sad terrorist attacks. The Executive Director of AiG UK emailed me to say his son was in one of the buildings in London close to the attacks and that no one in the building was allowed out at that time. As I watched television and saw the areas where the bombs exploded, I and other AiG staff could identify with every one of them--we've been to London many times and have traveled on the underground to those very stations.

THRILLING TESTIMONY FROM THE UK

The Executive Director of the UK AiG (who will also be speaking at our MEGA conference in just over a week) sent this exciting testimony:

"I would just like to say that I have been remiss in sending my thanks to the staff there at AIG. I have ordered a few things from you now and each time the order is delivered very quickly despite being so far north in Britain.

My children love the Creation Adventure team DVDs, so do I! I have been able to use information from AIG to witness to some friends which has been encouraging for me and hope for more breakthroughs with more.

I do have one question though. I bought some seminar DVDs and am wondering whether or not I can show them to large groups as I believe here in Shetland [Shetland Isles are north of Scotland] the time is here to start using this information in bigger way. Other Christians here believe that the Evolution-Creation debate is more relevant and I know of one girl who has been saved because of one of your DVDs. She has been coming to church since she was little but is now seventeen. She would sing and play her fiddle but never really understood about salvation until she saw a Ken Ham seminar( not sure which one ) but is now on her way on a mission program to Africa. She and her boyfriend are both now saved and strong in their faith thanks to AIG." By the way--we greatly encourage people to show our DVD's to all size groups--we don't have restrictions as the secular world does--we want to get a vital message out!

PRAY FOR THIS WEEKEND

I will be speaking at a Home School Conference and then a large church in Alabama. See our on line events calendar for details: click here. I would appreciate your prayers for this time.

Dr. Terry Mortenson sent this to me today:

"Tomorrow morning I fly to Albuquerque, New Mexico, with my event manager, Tom Ferone. We return Sunday evening. With travel between the three venues in different parts of the metro area, set-up and take-down of book tables, projector, etc., and the actual speaking, it will be three very full days. I speak twice at a church Friday night, then on Saturday afternoon at another church to about 150-200 home school students and parents and then on Sunday morning at three services of another church. We fly home that afternoon.

In the past two days I did radio interviews with two Christian radio stations in Albuquerque, so hopefully there will be good attendance at these events.

Once again, I will appreciate your prayers for strength for the demanding schedule, safety in our travels and that God would impress upon the minds and hearts of my listeners the truths that I will be presenting." MEDIA

Dr. Jason Lisle was interviewed on two radio stations over the past two days. I am just amazed at the amount of media coverage (Christian and secular radio and TV) AiG receives. Praise the Lord!