I mentioned in Tuesday’s blog that my dad was sorting through some old things that had belonged to his parents. During the sorting, he came across a letter that his father had sent to him while he served in the military. I never knew my grandfather, as he died of a heart attack many years before I was born. However, my dad always told me that we had a lot in common. We both loved teaching. My grandfather had wanted to attend college and become a teacher but did not have the resources to do so. However, he often taught Sunday school. My dad would tell me stories about how grandpa would work the night shift, come home, clean up for church, and then teach Sunday school. He was very dedicated.

In the letter my dad found, it was obvious that my grandfather and I have something else in common, our love of God’s Word and our willingness to fight for the Bible’s truthfulness and authority. My dad believes the letter was written around 1960 shortly before my grandfather died. My grandpa shared with my Dad some of the problems with Sunday school literature in his church.

We have a big meeting on the literature coming up this week. Pray for us. [Name withheld] told me this morning that he has found out that those who have written our literature do not believe that the Bible is necessarily the inspired word of God. I hope he has proof. If he has we have the battle won and I do mean battle. I had about sixteen in my class this morning. The lessons have wonderful titles but they do not always have the teaching to back it up. When this happens I turn to the inspired word of God and teach with his help.

It was so encouraging to me to visibly see this amazing godly legacy on paper! I feel a special connection to my grandfather now and I look forward to seeing him in heaven and discussing these things. Doubting the Bible is God’s Word started long before our modern times. In reality it’s been happening since shortly after creation, when Satan questioned God’s Word, “Did God really say . . . ?” (Genesis 3:1) and Eve chose not to believe God’s Word as truth. Almost 50 years before I started teaching Sunday school, my grandfather was having the same problems we’re experiencing with Sunday school literature today! There truly is nothing new under the sun (Ecclesiastes 1:9). I’m sure my grandfather would be thrilled with Answers Bible Curriculum (see my previous blog post) in which we teach children and adults alike to know and defend the Bible as the Word of God.

As I was sorting through these things with my dad, I came across one of my old children’s book called Noah’s Ark. The book was printed in 1969 by Golden Book and I was really impressed with the realistic pictures! 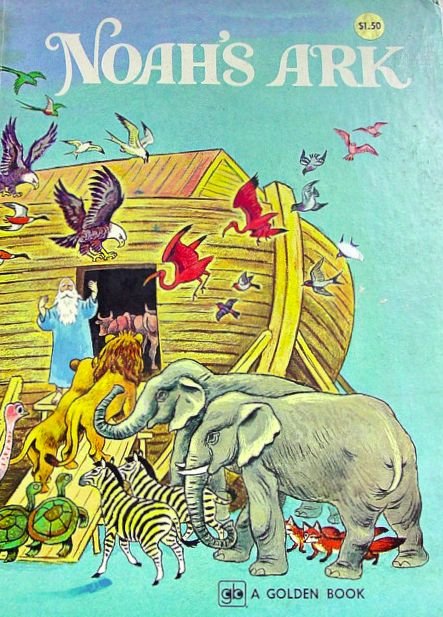 Front cover of the 1969 edition 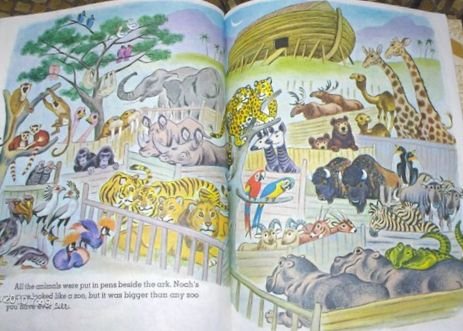 Very realistic ark with the animals

As I looked for images from the book online I came across the 2003 version of Noah’s Ark from the same publisher. 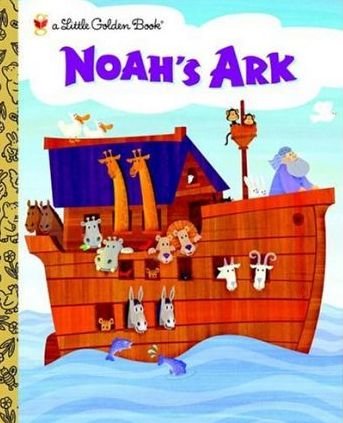 Front cover of the 2003 edition

It appears that the publishers no longer think of the account of Noah’s Ark as real but merely a made-up child’s story.

I also noticed the wording in the book had changed.

[1969] God said to Noah, “I am going to flood the earth and destroy every living thing on it—except for you and your family and two of each kind of animal.

[2003] God said to Noah, “I am going to wash away the evil in the world with a great flood.” He told Noah to build a special boat, called an ark, to save his family. “Bring into the ark two of every kind of animal,” God told Noah.

So their description of the Flood went from “flood the earth and destroy every living thing” to “wash away evil with a great flood.” These are subtle but nonetheless significant differences that seem to imply more of a local flood with minimal impact in the 2003 edition. Praise God for our many children’s resources that don’t “myth” the ark!

My grandfather was right—this is a battle, and the battle will be won because we have the truth of God’s Word on our side.

Previous Article A Blast from the Past Next Article Bacteria Evolve “Key Innovation” or Not?