The Golden Rule According to Whom?

At the end of the last school year, my daughter’s public school took part in an anti-bullying campaign.The cover of the short workbook they completed in class intrigued me. Here is a picture of it. 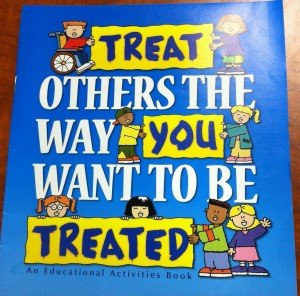 When I read it, I couldn’t help but smile! This is the so-called Golden Rule, which comes from Luke 6:31, “And just as you want men to do to you, you also do to them likewise.” Of course, the workbook doesn’t give credit to the Bible or to God. The workbook states, “Students will learn to follow The Golden Rule by being fair, kind, respectful, responsible, and honest. ‘Treating other people the way you want to be treated’ is an important life skill that needs to be modeled and encouraged by all.”

As I pondered these statements I couldn’t help but think how inconsistent these ideas are with the evolutionary worldview that is taught in public schools. Evolution works by “survival of the fittest,” not “survival of the fairest and kindest.” In fact, many eugenicists (those that promote the birth of the “well-born”) both of the past and present readily acknowledge that helping the sick, poor, and weak impedes the evolution of man to a higher level. Margaret Sanger, founder of Planned Parenthood, wrote, “Organized charity itself is a symptom of a malignant social disease . . . our civilization has bred, is breeding, and is perpetuating constantly increasing numbers of defectives, delinquents and dependents. My criticism, therefore, is not directed at the failure of philanthropy, but rather at its success.”[1]

For the public schools to be consistent with an evolutionary worldview, they should actually be encouraging bullying and not campaigning against it. Bullying could be seen as an aspect of natural selection since those that cannot withstand bullying (the weaker) decrease, and those that stand up to the bullying or are bullies are stronger and increase. (Thanks to Todd Friel of Wretched for initiating my thinking on this topic!)

In addition, if humans are nothing more than animals then morality is irrelevant, as it does not apply to animals. When a cat kills a mouse, we don’t charge the cat with first-degree murder because the cat is an animal acting on instinct and not a moral agent. So, if people are just animals acting on instinct, if they are nothing more than the sum of their genes, then we cannot justifiably say bullying is wrong. Evolutionary biologist Dr. William Provine stated, “Let me summarize my views on what modern evolutionary biology tells us loud and clear–and these are basically Darwin’s views. There are no gods, no purposes, and no goal-directed forces of any kind. There is no life after death. When I die, I am absolutely certain that I am going to be dead. That’s the end of me. There is no ultimate foundation for ethics, no ultimate meaning in life, and no free will for humans, either. What an unintelligible idea.”[2]

The real question is by what authority does a teacher or a principal or a school say that bullying is wrong and that students should be fair and kind? They cannot claim a higher authority outside of themselves and promoting anti-bullying is actually inconsistent with the evolutionary worldview that, by and large, public schools teach. This is the same question I asked in Tuesday’s blog related to the issue of the definition of marriage. If we don’t have an ultimate authority outside of ourselves then it is just our arbitrary opinion.

What a joy for me to share with Elizabeth the biblical foundations of the exhortation to treat others as you want to be treated! She has a biblical basis for being fair and kind. Elizabeth has had the opportunity to live out the Golden Rule and show others the love of Christ by being fair and kind even when others were not treating her the same way. I hope as the school year begins that you will join with me in praying for Christians in the public school system, whether students, teachers, or administrators that seek to serve Christ in a very difficult setting. I also encourage parents to check out our resources and make sure you are equipped to equip your children with the authority and truthfulness of God’s Word.

Previous Article Authority, Opinion, and the Definition of Marriage Next Article One of Zoe's Last Wishes