One of Zoe's Last Wishes

Last Saturday I had the opportunity to meet 10-year-old Zoe and her family at the Creation Museum. A couple years ago, Zoe was diagnosed with an inoperable brain tumor and given less than a year to live. After several types of treatment she improved, but several months ago the tumor started to grow again and invade other parts of the brain. Zoe’s family believes she only has several weeks to live. 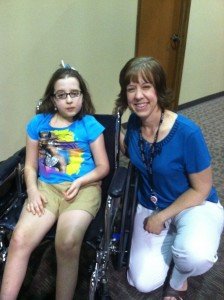 Zoe was at the Creation Museum on opening day and has been here several times since then. Her family is trying to pack as much as they can into these last few weeks, and one of Zoe’s wishes was to visit the museum. When I asked her what her favorite part was, like many kids, she said the dinosaurs. I also discovered from talking with her family that she liked horses and had an interest in geology, especially gems and minerals.

I couldn’t help but think how much she had in common with my own daughter Elizabeth, who is nearly the same age. My heart broke as I watched her grandfather kneel, take Zoe’s hand, and look into her eyes so lovingly. I started to think about what I would think and feel if it was Elizabeth in the wheelchair instead of Zoe.

My first thought was immense sorrow. My husband Chris and I love Elizabeth dearly, and the thought of not having her as part of our life would be devastating. Being a public speaker, I then thought about how I would share the story of the loss of my daughter with others.  Many people would probably want to know how I could believe that God is loving if He allows children to die. It isn’t God’s fault that children die and that we all ultimately die. Rather, it is man’s fault. Adam sinned in the Garden of Eden, and as a result—as a punishment—suffering and death entered this world (Genesis 3).

In a general sense, we can explain the existence of suffering and death in the world with sin—Adam’s sin and our personal sin (as a descendant of Adam we are all sinners). As Ken Ham says in his book How Could a Loving God…? “It is only those who believe the history God has given to us (beginning in Genesis 1:1) who can consistently explain how there can be a loving God and death and suffering at the same time.”

And although I know this is the ultimate answer, I would still have to grapple with the question of “why my daughter?” Or as Zoe’s family I’m sure is pondering, “why Zoe?” This is where our theology, our knowledge of God from His Word, is so important. I think the most important thing about God that I would reflect on to answer the question of “why my child?” is the fact that God is sovereign.

Oh, the depth of the riches both of the wisdom and knowledge of God! How unsearchable are His judgments and His ways past finding out! (Romans 11:33)

“For My thoughts are not your thoughts, Nor are your ways My ways,” says the Lord.

“For as the heavens are higher than the earth, So are My ways higher than your ways, And My thoughts than your thoughts. (Isaiah 55:8-9) A few nights ago as I shared with Elizabeth about Zoe, I reminded Elizabeth that God has a plan and a purpose for Zoe’s life and death, and it will be for His glory. Romans 8:28 is not a cliché; it’s the Word of God! “And we know that all things work together for good to those who love God, to those who are the called according to His purpose.” I have no idea how God is going to use Zoe’s life and death for His glory, but I know from His Word that He will!

We are praying for Zoe and her family, and I encourage you to do the same. Check out Zoe’s family’s blog for more information on their journey. I also highly recommend the blog of my friends John and Tina that was written as they dealt with the birth and death of their daughter, Eden. It has brought great encouragement and comfort to many.

Previous Article The Golden Rule According to Whom? Next Article Battle of the Billboards