Authority, Opinion, and the Definition of Marriage

It’s been all over the news—and unless you live under a rock, you probably know what I’m referring to. Dan Cathy, president of Chick-fil-A, defined marriage according to the Bible and a media storm ensued. Cathy stated, “We are very much supportive of the family—the biblical definition of the family unit. We are a family-owned business, a family-led business, and we are married to our first wives. We give God thanks for that.”[1]

My husband said he didn’t know why people were so surprised. After all, Cathy is a Christian, and we should expect him to define marriage according to the Bible. He’s right, but in a society that says we should be tolerant of everything (except the right to be intolerant, of course), Cathy’s statement was considered completely unacceptable.

What I really appreciated about Cathy’s statement was the phrase, “biblical definition of the family unit.” As Christians, the Bible is our ultimate authority, so when we define marriage or share our thinking on any issue, it must be grounded in the authority of God’s Word. Otherwise, it’s just our opinion! Scotland recently decided to legalize gay marriage. In an article by a minister of the Church of Scotland who professes to be a Christian, he stated that initially he opposed gay marriage but changed his mind.[2] He stated, “So what made me change my mind? The key factors were meeting Christian same-sex partners, and revisiting scriptures which were used to buttress the Churches’ anti-gay position.”

Notice that one of the key factors is what I would call the “happiness factor.” He describes same-sex couples he knows and how happy, committed, and loving they are. Essentially he is saying that gay marriage is right because it makes people happy. But this is nothing more than his opinion! Is that how right and wrong should be decided? What if it makes someone happy to shoot and kill other people—should that also be considered right?

In the article he doesn’t deal with specific biblical passages that speak against homosexuality (e.g., Romans 1) that should be his focus. Instead, he says that since certain civil laws (e.g., stoning disobedient children) are no longer applicable and because, “In the past, people have used scripture to support slavery and to oppress women,” therefore the Bible isn’t always right or relevant. He writes, “The truth is that language is always changing to meet new situations.” But what does God say about His Word in Proverbs 30:5–6?

Every word of God is pure;  He is a shield to those who put their trust in Him. Do not add to His words,  Lest He rebuke you, and you be found a liar. The language that God uses to convey His truth never changes! Now, our ministry is centered on apologetics and not questions regarding Old Testament law, but my opinion is that certain civil laws do not apply today because they were specifically for the nation of Israel under the old covenant (or another view is that God has changed, modified, or abrogated certain laws in the New Testament). People have read their own ideas into the Bible to support racism and the oppression of women, but God’s Word makes it clear that we are one race (Acts 17:26) and that women and men are equal before Christ (Galatians 3:28).

Although it’s easy to see the problems with the ideas of this compromised Christian minister, I see many Christians today “leaving the Bible out of it” when they defend the biblical definition of marriage. In interviews I have watched when Christians are asked why marriage should be defined as one man and one woman, many will say things like, “Traditional marriage is what’s best for society,” or “Children need a mother and a father.” While these are good outcomes of traditional marriage, they are not the reason marriage should be defined as between one man and one woman. That definition comes solely from the Bible!

If it’s up to man to decide what marriage should be, then the definition is completely arbitrary and whose arbitrary opinion should become law? Who defines the “best for society” and why that should be the goal?  Why not what’s worst for society? Without the ultimate authority of God’s Word, the meaning of words like good and bad, right and wrong, are meaningless. Why can’t you marry more than one person, your dog or your car? Proponents of gay marriage say it will never lead to things like that. But why not? That is the logical outcome, no matter how absurd it may seem now, when there is no ultimate authority that determines the definition of marriage. I encourage you to read “Morality- the Secular Response?” by Bodie Hodge for more on these ideas.

My family showed our support for Chick-fil-A on Saturday. Even on Saturday the line was out to the door the entire time we were there! How encouraging to see such a great outpouring of support for a business run on biblical principles. 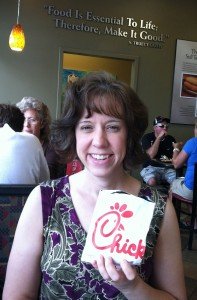 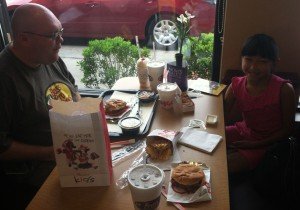 Even though my husband Chris is not a fan of chicken, he enjoyed the meal, and Elizabeth loves going there!

[2] Ron Ferguson, “Same-sex marriage debate rages on as the government goes down a courageous road,” Aberdeen Press and Journal, July 31, 2012.

Previous Article Equipping Women in England Next Article The Golden Rule According to Whom?