Yesterday was the first of several days we will spend visiting Isabela. It is one of the youngest islands with five active volcanoes. On the panga ride to the island in the morning we spot more Galapagos penguins. My daughter Elizabeth loves penguins, so I try to take a lot of pictures. That’s not an easy feat from a moving panga filled with people! Our naturalist tells us that many of them are cleaning themselves after eating. They are fun to watch swimming and diving and floating along in the water.

We arrive on Isabela and begin our walk through a lava field. The lava is very rough and pointed. Our naturalist tells us it is called Aa lava (pronounced “ah-ah”). Aa is the Hawaiian word for “hurt,” and just looking at the lava makes me think this term is very appropriate! The green and white crusty substance on the top of the lava is lichens. The landscape here stands out in stark contrast to what we have see seen on the older islands.

This portion of the island is a nesting place for marine iguanas, and we soon enter marine iguana “kindergarten.” On Isabela the marine iguanas are very black and are difficult to see against the lava. We see iguanas of varying sizes (and thus, varying ages). Some are resting on top of each other, and they are huddled close together for warmth. We also see a young white-tipped shark resting in a nearby lagoon.

We also spot several different types of birds including an American Oystercatcher, Brown Pelican, Blue Heron, and Yellow-Crowned Night Heron. I particularly liked the oystercatcher as its bright orange beak, feet, and legs really stand out against the lava. We see some coral skeletons mixed in with the soil (made from eroded lava) beneath our feet and learn that much of it is deposited there during El Niño years. More mature marine iguanas greet us as we prepare to leave this part of the island.

Next we visit the Galapagos National Park and Charles Darwin Research Station tortoise breeding program on Isabela. It is very similar to what we saw on Santa Cruz, but there seem to be many more tortoises here. Here they breed just Isabela tortoises, of which there are five recognized species/subspecies associated with each of the volcanoes. The breeding program is necessary for the survival of the tortoises. Many introduced animals such as goats, pigs, horses, and dogs severely decrease the possibility of tortoises being born and surviving the first few years of life in the wild.

In the afternoon we visit the volcano Sierra Negra. It is one of the most active volcanoes in the world and has the second largest caldera at just over nine kilometers. It took an hour by bus and then another hour of difficult hiking before we arrive at the top. It is very foggy at the top and we cannot see in the caldera. We all start praying silently that the fog will move so our trip to the top will be worth it and we can get some good pictures and video. Slowly the fog starts to move from a portion of the caldera and we get some great shots. Our naturalist can’t believe how lucky we are, but we know it’s not luck! It is amazing to see the contrast of the black lava field of the caldera compared to the lush green that covers its sides. Our naturalist tells us it last erupted in 2005 and they are expecting another eruption at any time. Such comforting thoughts when you are standing on top of the volcano! We hike back down and look forward to dinner and rest for our weary bodies.

Our leaders, the Davises, ask if we can have an “easy” day tomorrow, as we seem to have gone non-stop since our arrival. Ironically, this coincides with Memorial Day in the U.S.! Our boat did not travel last night, so we had a good night’s rest, and our first excursion is not until late afternoon. Most of the day will be spent traveling around Isabela to the other side. We’ll see how I handle that since most of our traveling is done at night and tends to make me seasick! More penguins today, and maybe our first look at the flightless cormorant. Enjoy the pix! 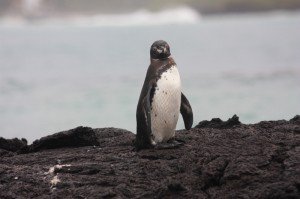 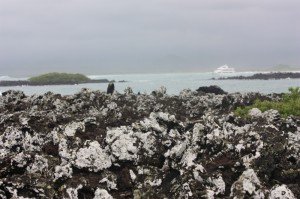 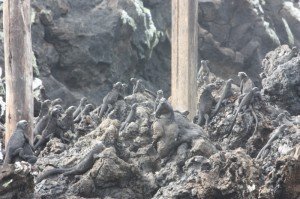 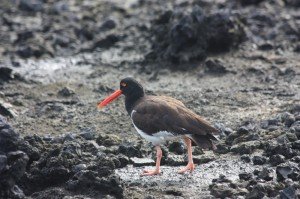 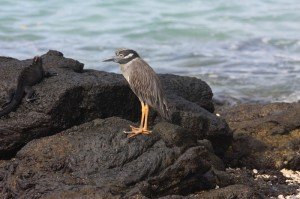 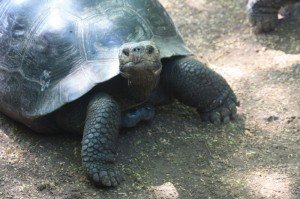 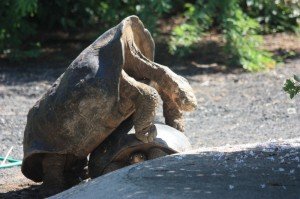 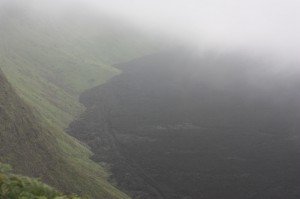 Inside view of Sierra Negra caldera