A Prominent Flat-Earther Proves the Earth Is a Globe

In an earlier blog, I discussed the so-called black swan photo (Figure 1) that flat-earthers so frequently present as their ultimate proof that the earth is flat. This photo shows two oil rig platforms several miles off the California coast with the visible horizon beyond both platforms. The photo was taken on the beach a few feet above sea level. The known height above sea level permits computation of the distance to the geometrical horizon based upon the earth being a globe with a radius of nearly 4,000 miles. This calculation places the geometrical horizon between the shore and the platforms, so the bottoms of the platforms ought to be partially obscured by the earth’s curvature. The fact that this is not the case in the black swan photograph supposedly disproves that the earth is a globe. I say “supposedly” because, as I pointed out in my earlier blog, flat-earthers commit two errors when they use the black swan photo this way.

The first error is that flat-earthers don’t consider atmospheric refraction, which is nearly always present to some degree. The fact that atmospheric refraction is at play in the black swan photo is evidenced by the vertical compression and wavy distortion that the more distant platform exhibits in the photo. Temperature inversions are common off the California coast. Temperature inversions can refract light a considerable distance along the earth’s curvature, placing the visible horizon far beyond the geometrical horizon. The second error that flat-earthers make in invoking the black swan photo is that they pass off what this photo shows as an everyday occurrence. As I demonstrated in my earlier blog, the man who made the video admitted that most days the visible horizon is between the shore and the platforms, exactly where the geometrical horizon is supposed to be (see Figure 2). Notice the relative lack of distortion in this photo as compared to Figure 1. It is dishonest to cherry-pick relatively rare data and present it as the norm. 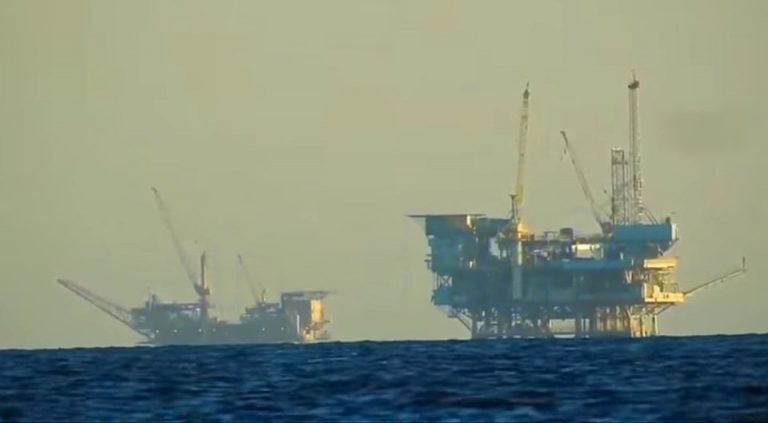 Figure 2. Same view on most days, showing where the horizon should be 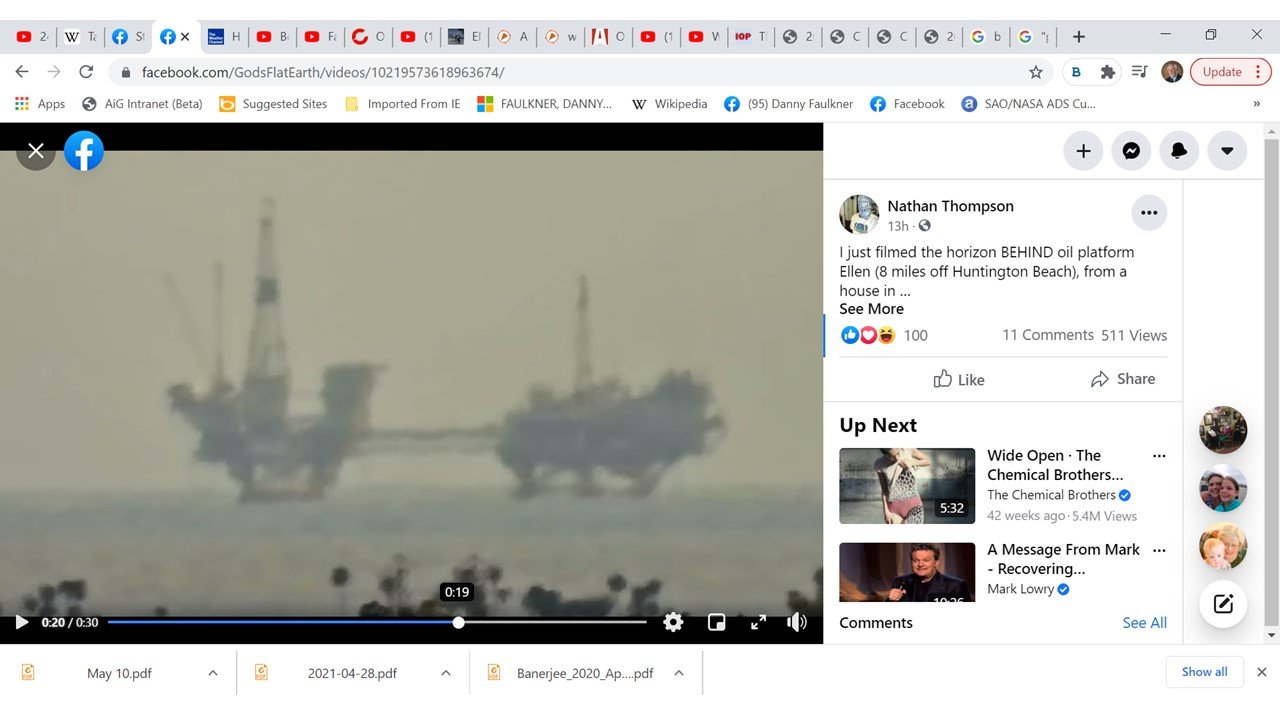 A Problem for Whom?

Nathan Thompson, a prominent flat-earther that I’ve previously discussed, recently made a video where he made much the same claim. His video shows Platform Ellen and Platform Elly several miles off Huntington Beach, California. See Figure 3 for a screenshot I took from Nathan’s video. Platform Ellen is on the left, and platform Elly is on the right. Notice that the visible horizon lies just beyond the two platforms. Figure 4 is a screenshot of the edit history of Nathan’s comment with his video. His original comment said that at his elevation of 510 feet, the geometric horizon ought to be 22.5 miles. Nathan concluded that since the platforms are nearly 25 miles away, this view is impossible if the earth is a globe. Notice Nathan’s gloating. But also notice that the gloating and details are gone in the edit six hours later. Why did Nathan change his comment?

I immediately saw a problem with Nathan’s calculation. I suspect a flat-earther friend of Nathan’s probably noticed it too and got word to him. Flat-earthers frequently use the eight-inches-per-mile-squared approximation to find the distance to geometrical horizon. Using Nathan’s height above sea level, I found the distance to the geometrical horizon to be (510)2 x (8 inches)/[(12 inches/foot)(5,280 feet/mile)] = 32.8 miles, not 22.5 miles. This is well beyond the 25-mile distance of the two oil rig platforms. Thus, rather than disproving the earth is a globe, this video shows exactly what one would expect with a globe earth. OOPS! No wonder Nathan edited his comment. Still, his remaining comment vaguely suggests that what he recorded is a problem for the earth being a globe. This is dishonest.

To conduct my analysis, I needed to know the height of Platform Ellen. An online search did not reveal the platform’s height online, but I did learn that the catwalk between the two platforms is 200 feet long. In Figure 3, you can see the catwalk connecting the two platforms. Figure 5 is a screenshot of the two Platforms from Google Earth. I used the ruler app on Google Earth to measure the bearing (azimuth) of the catwalk in going from Platform Elly to Platform Ellen to be 197 degrees. Figure 6 is a screenshot of Nathan’s video showing his line of sight to Platform Ellen. I replicated that line of sight in Google Earth and found its bearing (azimuth) to be 240 degrees (see Figure 7). Therefore, the orientation of the catwalk to Nathan’s line of sight was 240 degrees – 197 degrees = 43 degrees. Hence, in Nathan’s video, the catwalk is projected to a length of 200 feet x sine (43 degrees) = 136 feet. 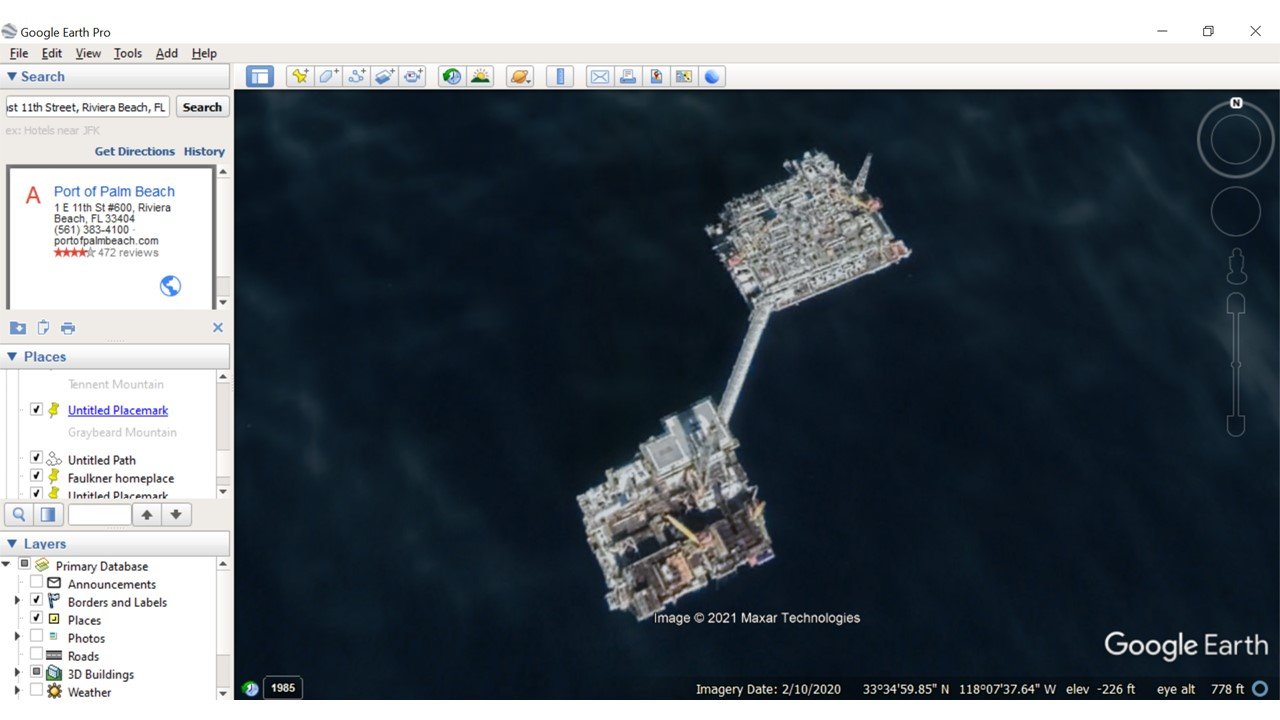 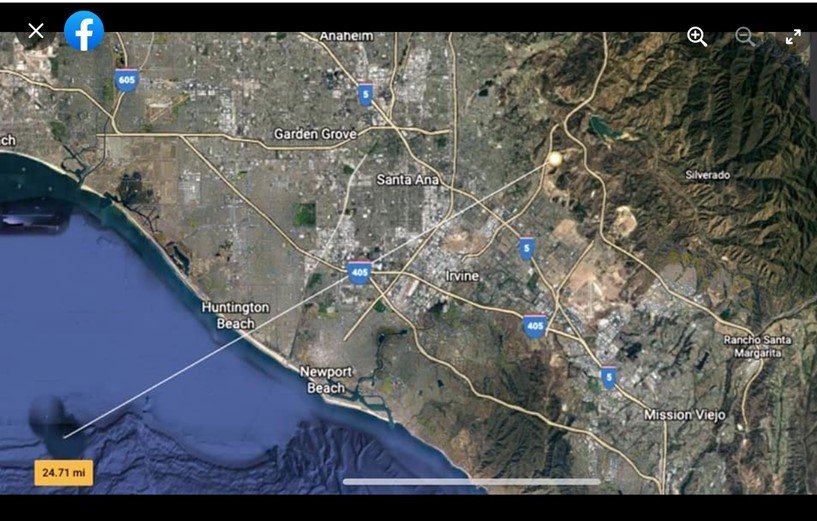 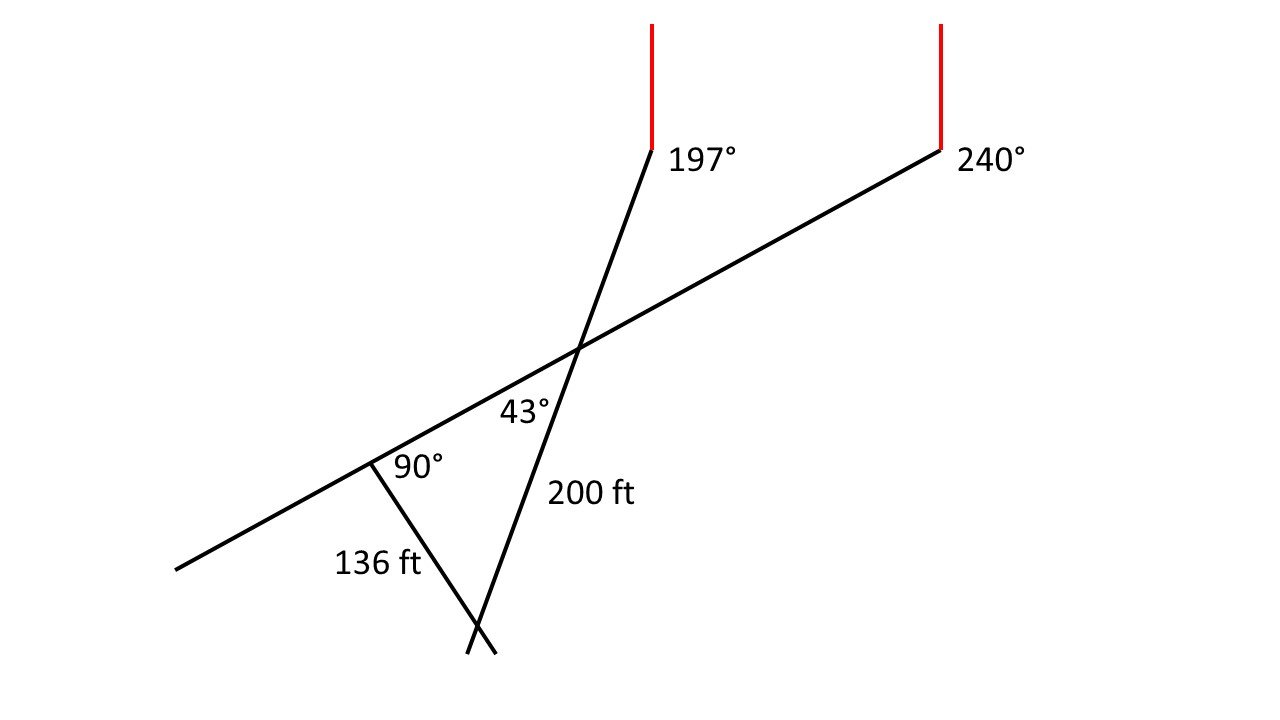 As I previously pointed out, the horizon seems to be beyond the oil rig platforms, appearing just slightly above the bottoms of the two platforms. But if the earth is flat, this cannot be the case because the horizon would be horizontal, with the top of Platform Ellen tower 0.099 degree lower because “the horizon rises to eye level.” Since this is clearly not what we see, proper analysis of Nathan’s video reveals that it proves exactly the opposite of what he claimed. That is, Nathan’s video ended up proving the earth is a globe. Welcome to globe earth, Nathan.