Watch for the Lunar Eclipse on May 26

As I mentioned in my year-in-preview blog in January, there is a total lunar eclipse on May 26. Some press accounts are calling this eclipse a “Super Flower Blood Moon.” I’ll explain the super part presently. The flower part comes from names various cultures have for the full moon each month of the year. For instance, the full moon in September is often called the “harvest moon” because that is when many crops are harvested in the Northern Hemisphere. There are various names for the full moon in the month of May. One name is “Corn Planting Moon” because that is when corn (maize) is usually planted. Another name for the full moon in May is “Flower Moon” because, well, “March winds bring April showers; April showers bring  . . . .” This name often is attributed to the Algonquin people.

The blood part comes from the common practice anymore of calling a total lunar eclipse a “blood moon.” I object to this practice on two grounds. First, there is scarcely any historic precedent for calling total lunar eclipses blood moons. This practice was initiated less than a decade ago by Mark Biltz. Second, remember the names for full moons each month? The full moon following the harvest moon is often called the “hunter’s moon” because that is hunting season for many game animals. A common alternate name is “blood moon” because of the bloodshed that occurs in hunting. Since the term “blood moon” already has a long-standing meaning, appropriating this term for lunar eclipses is confusing.

There are a couple of peculiarities involved in this eclipse. First, it is barely a total eclipse, with totality lasting less than 20 minutes. Consequently, during mid-eclipse one part of the moon’s limb (edge) will remain brighter than the rest of the moon. Second, this eclipse will occur near perigee, where the moon is closest to the earth once each orbit (it takes a month for the moon to orbit the earth). Thus, the moon will appear slightly larger than normal.

When perigee occurs at full moon (which must be for there to be a lunar eclipse), some people call it a “supermoon.” Upon hearing there is a supermoon, many people go outside to see it, expecting the moon to look huge. I’m sure that with the hype of this eclipse occurring during a supermoon, there will be more people than usual looking for this supermoon. Unfortunately, this always leads to disappointment. The problem is that it is very easy to fool the human eye, making it impossible for the eye to detect the 14% variation in the moon’s apparent size. However, the camera is not so easily fooled.

During the January 2018 total lunar eclipse, the moon was close to perigee. At the time, I didn’t realize it, though I suspected it was the case as I was looking at the moon through a telescope that I used to photograph the eclipse. I later confirmed that the moon was near perigee. Nine months later, full moon and apogee (the most distant point in the moon’s orbit) nearly coincided, so I took photos of the moon that night. Here is a comparison of two photos of the moon, one that I took at perigee (while eclipsed) and the other at apogee (no eclipse), reproduced at the same scale. Notice how much larger the moon appeared when at perigee (left) than at apogee. However, the eye alone can’t see this. 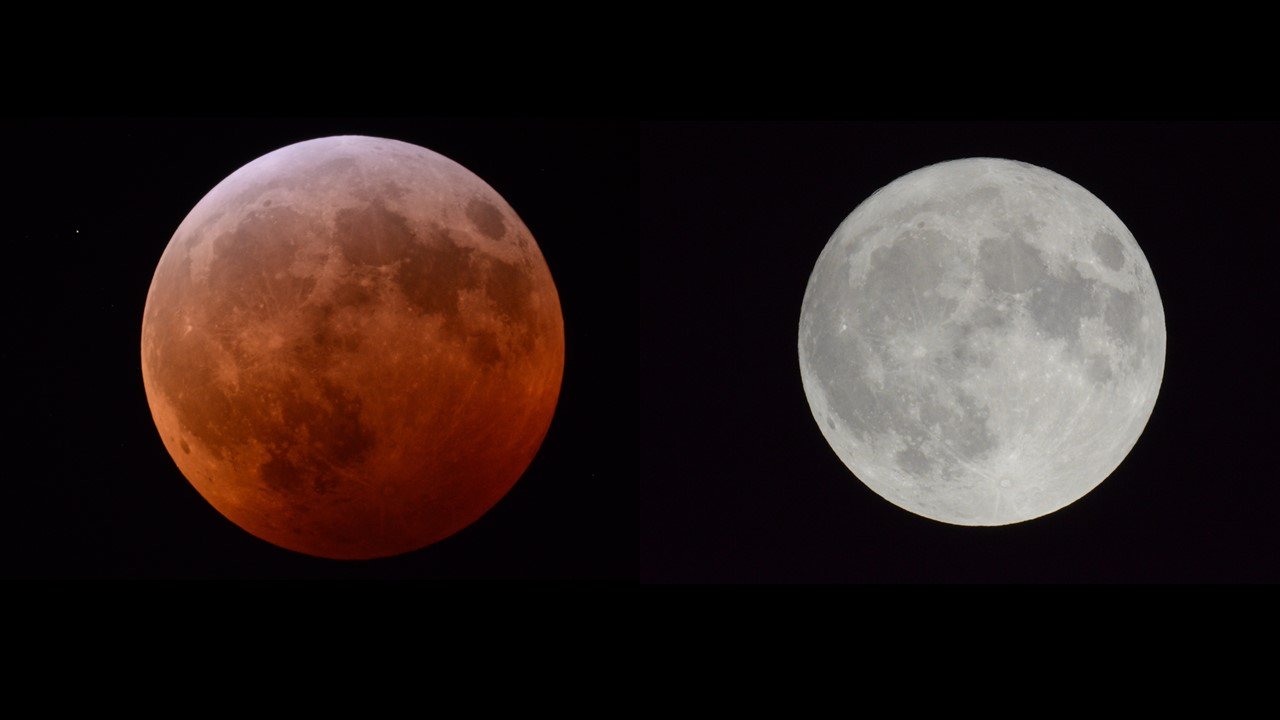 On the other hand, these two thin slivers on opposite sides of the earth where the eclipse ends at sunrise and begins at sunset offer an opportunity for many people to witness a selenelion. A selenelion is when both the sun and partially eclipsed moon are above the horizon simultaneously. Sometimes news accounts call a selenelion an “impossible eclipse.” Flat-earther seize upon this supposed impossibility as evidence that the conventional cosmology is wrong. However, as I explain in my book, Falling Flat: A Refutation of Flat Earth Claims, atmospheric refraction, along with the non-point sizes of the sun, moon, and the earth shadow, make selenelions possible. It’s not as if the sun and moon are very high in the sky. One is just rising while the other one is setting in the opposite direction. Consequently, selenelions last only a few minutes. They require very clear skies and a good exposure in both directions. I’ve never seen a selenelion, so I intend to be watching Wednesday morning. However, locations farther west in the United States will be more favored.

If it’s clear where you live, why don’t you give this eclipse and selenelion a look?

Previous Article Announcing the Second Answers in Genesis Field Trip to Red River Gorge! Next Article A Prominent Flat-Earther Proves the Earth Is a Globe