Firefighters Save Trees That Outlived the Dinosaurs . . . But Was That Millions of Years Ago? 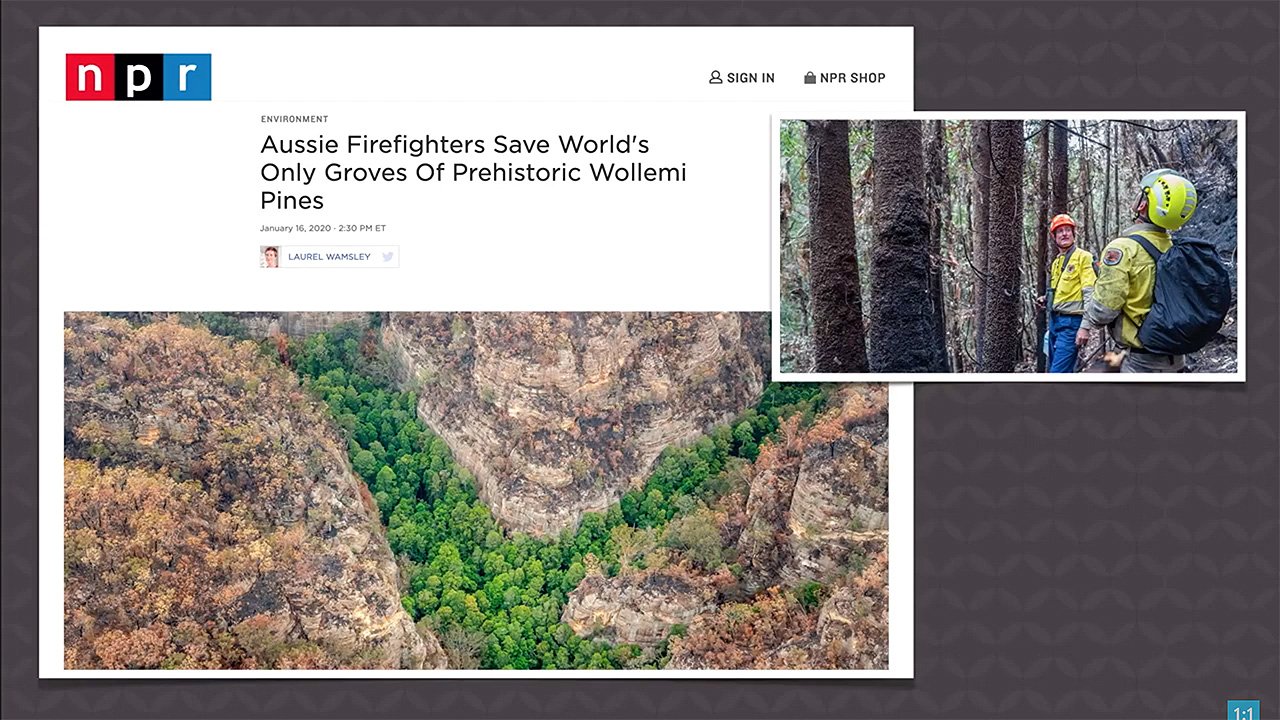 Devastating wildfires have been burning throughout my home country of Australia for several months now. Firefighters and others have been working tirelessly, risking their lives, attempting to save people, homes, animals, and more from the fires. And one of the things they successfully saved was the only known grove of Wollemi pines—a species of tree I love talking about. Why?

Well, this particular type of tree is believed by evolutionists to be older than the dinosaurs, according to secular dating. They were thought to have been extinct a long time. That is until 1994, when an officer with the New South Wales National Parks and Wildlife Service ventured into a small canyon (the location is still a secret) and saw trees he didn’t recognize. Biologists later realized these were the trees believed to have gone extinct many millions of years ago. Yet they were alive and well in this small canyon.

Amazingly (actually not at all that amazing when you think about it), the trees hadn’t changed in millions of years—they looked just like their fossil counterparts. I guess they must have forgotten to evolve—despite the massive changes that were supposedly taking place on earth at that time (such as the extinction of the dinosaurs).

The Wollemi pine is a reminder that evolution is just a fairy tale. It didn’t happen!

The Wollemi pine is a reminder that evolution is just a fairy tale. It didn’t happen! These trees are part of a kind created on day three of creation week. Many of them were buried during the flood just a few thousand years ago, but some survived and their progeny can be found growing wild in a secret location in Wollemi National Park. But since, to our knowledge, dinosaurs have indeed gone extinct since the flood, these trees indeed outlived the dinosaurs! But only by a few millennia (or even a few centuries), certainly not by millions of years.

You can now buy Wollemi Pine trees at certain plant nurseries in Australia. I took photographs of a Wollemi Pine tree that has been planted at Sydney’s famed harbor. Of course, the evolutionary fairy-tale story is also featured with this tree:

This item was discussed on today on Answers News with cohosts Avery Foley, Bodie Hodge, and Dr. Gabriela Haynes. Answers News is our weekly news program filmed live before a studio audience here at the Creation Museum and broadcast on my Facebook page and the Answers in Genesis Facebook page. We also covered the following topics: