Where Will You Be for the August 21 Total Solar Eclipse?

Caution: Never look directly at the sun. The only exception to this rule is during a total solar eclipse, and then only for totality, which lasts but a few moments. The American Astronomical Society has tips on how to view the eclipse safely.

Well, people certainly are getting excited about the total solar eclipse on August 21. Here at the Creation Museum, we’ve recently received many enquiries about our plans for that day. I’m going to watch the eclipse in Oregon, as part of a program sponsored by the Design Science Association.

At the Creation Museum, we generally have a policy that we don’t do outreach programs, such as telescope viewing, unless we have an expert running it. Since I’m the staff astronomer, and I won’t be here, there won’t be any special eclipse programs that day at the Creation Museum. The eclipse won’t be total here anyway, so I guess it’s just as well we don’t have anything special planned. There are many programs along the path of totality. For instance, Bob Jones University and Bryan College (both in the path of totality) are hosting large events that day.

No photograph or description does justice to the experience.

Ken Ham and I discuss the solar eclipse in a recent Facebook Live broadcast.

What to Look Forward to

If you are where the eclipse is partial (most of the lower 48 states), you probably won’t notice anything unusual. However, if you are in the path of totality, and if the sky is clear, it will get dark. It won’t be dark as midnight, but it can be dark like deep twilight. The brightest stars and planets will be visible. Venus, Mars, and Mercury are close to the sun and ought to be visible. For some locations, Jupiter to the east of the sun will be visible too. You ought to see the brighter stars of Orion, as well as Sirius, the brightest star in the sky. These are winter stars, so it will be a treat to see them high in the sky in summer.

During totality, one can look directly at the sun, because the sun’s bright photosphere will be blocked out. However, this is safe only during the brief period of totality. The maximum duration of totality will be about two and a half minutes, but the exact duration will vary according to location.

Did I mention do not look directly at the sun at any other time? Why look at the sun during totality? You will see the solar corona, the pearly-white outer atmosphere of the sun extending outward a diameter or so from the sun. You probably will see streamers outlining the sun’s magnetic field in the corona. The corona’s shape and appearance change throughout the sunspot cycle, so it will be different from previous eclipses. Closer to the sun’s limb (edge), bloodred prominences will appear as loops attached to the sun. At Johnson Observatory at the Creation Museum, we use a special filter on one of our telescopes to see some prominences during our Sun Spotting programs, but prominences are a much grander view during a total solar eclipse. 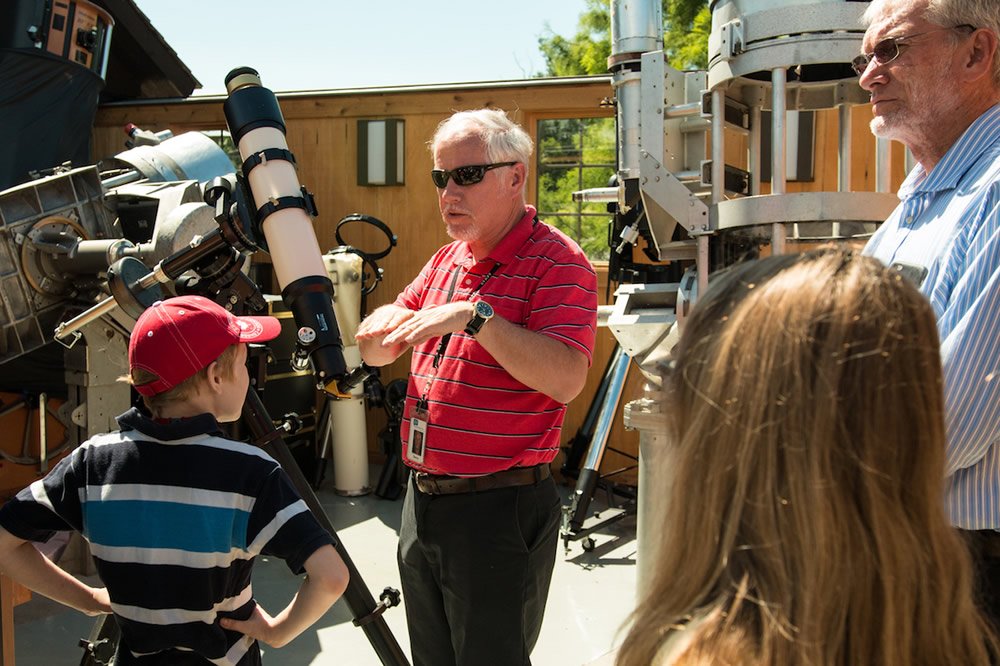 But there’s more. For a few minutes before and after totality, one can see shadow bands, faint wispy lines moving across the ground in the direction that the moon’s shadow is moving (roughly west to east). It helps to place a light object, such as a white sheet, on the ground to look for this.

Totality even has a remarkable effect on animals—they think it’s evening, so they attempt to go to sleep. Birds roost and cattle settle in for sleep, only to be awakened a moment later. And even people are greatly affected. I’ve seen one solar eclipse in 1979. We did an audio recording during the eclipse. On the tape, you can hear people hooting and hollering in the background. My wife talked, but I didn’t say two words. People who know me can attest that anything that can shut me up must be remarkable!

It’s important just to take it all in. So busy taking photos, I almost forgot to do that in 1979. About halfway through, I realized that I wasn’t enjoying the experience, so I stopped shooting photos and just knelt in the snow to take it all in.

Making Plans to View the Eclipse

A total solar eclipse is such an amazing event, I’m encouraging people to travel to where the eclipse is total, if it is at all possible.

A total solar eclipse is such an amazing event, I’m encouraging people to travel to where the eclipse is total, if it is at all possible. There are numerous websites, such as this one, that have maps showing the path of totality. Hotels are completely booked along the path, so unless you already have accommodations, planning a trip this late could prove difficult. However, hotel rooms may be available a few hours’ drive from totality. If you are driving into your chosen location that day, leave very early to allow much extra time for potential traffic jams. Watch weather forecasts the day before, and be prepared to travel along the path of totality to better weather if the weather looks bad at your chosen location.

There are many eclipse filters that you can purchase for use during the partial phases of the eclipse. Alternately, one may construct a pinhole camera. The holes in the canopy of a tree act as pinhole cameras too. The many bright spots on the ground in the shade of a tree are images of the round sun. But for a while on August 21, those spots will be images of the partially eclipsed sun. Again, use these safe methods for viewing the eclipse during the partial phases. Only during the brief totality can you safely view the sun without them. Of course, for those not in the path of totality, a pinhole camera or a safe filter is the only way to view the eclipse.

Happy eclipse viewing, everyone! After the eclipse, I hope to post some photos and my impressions of the experience.