Now that NASA spacecraft have had a chance to take a closer look, the so-called 'Face on Mars' turns out to be just a play of light and shadow on an ordinary looking geological feature. 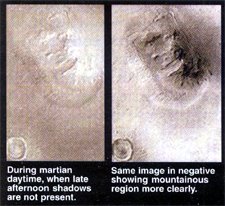 The top photo, taken by Viking 20 years ago, shows how the ‘face’ originally appeared. The lower left photo is the recent view, which is clearer and has light coming from a different angle. It can be plainly seen that these are natural features, and no carved ‘face’ is present. The lower right photo is a reversed negative of the left one, which gives a better idea of how the interplay of shadow made it appear face-like to begin with.

UFO/alien fans, and followers of certain other ‘flaky’ claims about ‘ancient martian civilisations’ will be disappointed. But Creation magazine took a stand on this ‘face’ being an artefact of light and shadow way back in 1988 (10(4):5, also 11(1)5 and 16(1):8). The earth is the uniquely designed home of humanity. It is here that the Creator Himself became a man (John 1:1–14).