Asteroids and comets used to be much simpler. I remember when there were 2,000 known asteroids. Now the number is closing in on one million. I remember when a dozen new comet discoveries in a year was a bunch. But anymore, even a bad year would have far more discoveries than that. The total number of known comets now exceeds 4,000. And comets and asteroids once were distinct things: asteroids were rocky; comets were icy; and comet ices sublimed into gas that we could see. Furthermore, the orbits of the two types of bodies were very different. But as I’ve previously written, the distinction between the two groups has become blurred. In recognition of that blurring, in 2006 the International Astronomical Union established a new classification, Small Solar System Bodies (SSSBs) to include both asteroids and comets.

Many of these telescopes are robotic, requiring no one to operate them, allowing them to record far more things than before.

What led to the explosion in the number of the discovery of SSSBs and the blurring of the two main subtypes? One factor is that we have far more telescopes, often large ones, operating that we didn’t have just a few decades ago. Many of these telescopes are robotic, requiring no one to operate them, allowing them to record far more things than before. Another factor is the large increase in the number of space telescopes that are free of the effects of the earth’s atmosphere and can operate 24/7 rather than just on clear nights. But the greatest factor is the far more sensitive electronic cameras that greatly exceed what earlier emulsion-based photography could do.

The first clue that something might be amiss with the distinction between comets and asteroids was the discovery of the minor planet (asteroid) 944 Hidalgo in 1920. Unlike most asteroids, Hidalgo has a very elliptical orbit with perihelion (closest approach to the sun) just beyond the orbit of Mars and aphelion (most distant point from the sun) nearly to Saturn’s orbit. Thus, Hidalgo orbits between the asteroid belt to within the orbits the two largest gas giant planets. This orbit was very different from other asteroids. While Hidalgo’s orbit had some similarities with comet orbits, it wasn’t a perfect fit for what was then known about comets. For years, astronomers assumed that Hidalgo was an asteroid, but that Jupiter’s strong gravity had perturbed, or altered, Hidalgo’s orbit from being entirely within the asteroid belt. Therefore, astronomers thought that Hidalgo was an outlier, an anomaly.

In Greek mythology, Chiron was the wisest of the centaurs, a half-horse, half-human chimera. The naming appears to have been chosen to reflect Chiron’s enigmatic orbit, possibly suggesting that Chiron had one foot (hoof?) in both the camp of asteroids and comets.

A second wakeup call came with the 1977 discovery of the minor planet 2060 Chiron. Chiron’s orbit extends from just inside Saturn’s orbit, with its aphelion nearly to Uranus’ distance from the sun. Chiron’s orbit was about half as eccentric as that of Hidalgo. Being so far from the sun and having a moderate orbital eccentricity, it was extremely unlikely that Chiron was an escapee from the asteroid belt. Rather, astronomers reasoned that Chiron probably was a denizen of the outer portions of the solar system. Perhaps it had been a natural satellite (or moon) of one of the gas giant planets that had been loosed from its planet’s gravitational grip. If so, then it seemed reasonable that Chiron’s was icy like the smaller satellites that orbit the gas giant planets. But wouldn’t that make Chiron more like comets than asteroids? Once again, astronomers had explained away evidence that something was amiss in their thinking. Or had they? In Greek mythology, Chiron was the wisest of the centaurs, a half-horse, half-human chimera. The naming appears to have been chosen to reflect Chiron’s enigmatic orbit, possibly suggesting that Chiron had one foot (hoof?) in both the camp of asteroids and comets. At any rate, it was suggested then that the names of other mythological centaurs be reserved for any other SSSBs that might be discovered with similar orbits among the gas giant planets.

In 1988, Chiron was observed to brighten by 75% as it neared its perihelion (but was still farther from the sun than Saturn). The following year Chiron developed a coma (a thin cloud of gas surrounding it), and in 1993 it sported a tail. These comet-like features were faint, but thanks to improvements in technology not possible a few years earlier, they were observable. Now that Chiron demonstrated characteristics of a comet, what were astronomers to do? That was easy: they reclassified Chiron as a comet. That required giving Chiron a comet designation. So, now its official name is P/95 Chiron (if you want to know more about how astronomers name comets and asteroids, see the Appendix to my article about the blurring distinction between the two types of objects). By the way, eventually more SSSBs with orbital characteristics like Chiron eventually were found, and as planned, many were given names of centaurs from mythology. Astronomers eventually came to call all SSSBs that orbit the sun between the gas giant planets centaurs. About 30 centaurs have since exhibited comet-like behavior.

With this background, let me discuss a recent news story about P/2019 LD2 (ATLAS). The name indicates that this is a comet discovered by ATLAS (the Asteroid Terrestrial-impact Alert System) in 2019. Its orbit is very close to Jupiter’s orbit, with perihelion slightly closer to the sun than Jupiter and its aphelion slightly farther from the sun than Jupiter. Unlike most comets, this comet’s orbit is not very elliptical. Since this is not the first centaur discovered, why was there much excitement about it? P/2019 LD2 (ATLAS) orbits the sun near Jupiter’s L4 Lagrangian point, a point in Jupiter’s orbit 60 degrees ahead of Jupiter as it orbits the sun. There is a collection of Trojan asteroids in both the L4 and L5 (like the L4 point but 60 degrees behind Jupiter) Lagrangian points. The Lagrangian points are places of orbital stability. Initially it was thought that P/2019 LD2 (ATLAS) was the first Trojan asteroid to display cometary behavior. However, further examination of the orbit of P/2019 LD2 (ATLAS) revealed that it was not a permanent member of the Trojan group but merely was slowly passing through this point of stability. 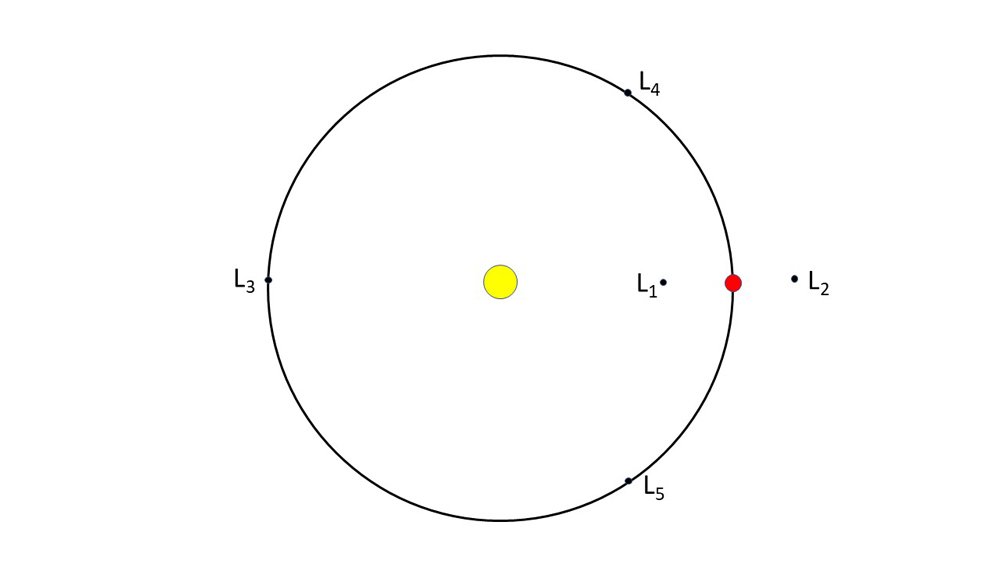 Illustration of the five Lagrangian points. The large circle represents the orbit of Jupiter (small red circle) around the sun (small yellow circle). The L1 point is closer to the sun than Jupiter is, while the L2 point is farther from the sun. The distance of the L1 and L2 points from Jupiter depend upon the masses of the Jupiter and the sun. The L3 point is on the orbit of Jupiter opposite the sun from Jupiter’s position. The L4 point is on the orbit of Jupiter 60° ahead of Jupiter, while the L5 point orbits 60° behind Jupiter. All five Lagrangian points are places where small objects can orbit the sun in long-term orbits, relatively free of changes in their orbits.

So, why all the excitement about P/2019 LD2 (ATLAS)? It’s probably because some astronomers think that it amounts to a sort of cosmic evolutionary smoking gun.

So, why all the excitement about P/2019 LD2 (ATLAS)? It’s probably because some astronomers think that it amounts to a sort of cosmic evolutionary smoking gun. The simulation (note: not observations) shows that the comet recently reached its current orbit from the Kuiper belt. Furthermore, the simulation shows that P/2019 LD2 (ATLAS) will soon (in 2063, probably after my lifetime) further evolve into a more stable type of comet. If so, then all of this presumably will demonstrate the hypothetical source and evolution of all short-period comets from the Kuiper belt. Frankly, this study doesn’t impress me. Since comets are demonstrated to have lifetimes far shorter than billions of years, their existence today presents a problem for an old solar system. Evolutionists have been aware of this problem for decades, which is why they have hypothesized the existence (made up) the Oort cloud and Kuiper belt. There remain problems for both. I suspect that this paper will not amount to much.