The Age of the Jovian Planets

Since the jovian planets have only recently been formed, they do not need nuclear processes to keep them hot for non-existent evolutionary aeons.

Morrison et al. state that a planet is a body of significant size that orbits a star but does not shine by its own light.1 In other words, we normally think of planets as having no internal power source. Thus the power they return cannot be greater than the power they receive from the sun.

But this is not so for the jovian gas giants. Jupiter, Saturn, Uranus and Neptune all give off more heat than they receive. The power excess for Jupiter is 3 x 1017 watts.2Jupiter actually radiates, mostly in the infrared, nearly twice as much power as it receives from the Sun.2 Saturn, although generating about half as much total power as Jupiter,2 has only 30% of its mass. So it produces nearly twice the energy per unit mass than Jupiter! Uranus and Neptune also produce excess energy but much less in total than their big brothers. All this means that there has to be an internal energy source in all of the jovian worlds.

The most common explanation is that all four planets are contracting and releasing gravitational energy. We know by the virial theorem, that during gravitational collapse, half the energy is released as radiation and half is absorbed as internal energy.3 However, the models tell us that too much energy is needed for the contraction idea to work unless Jupiter is 0.6 billion years older than the supposed age of the solar system.2

The major source of this additional heat was theorized to be helium separating out in the liquid hydrogen mantle and raining down upon the core.4 This gravitational mechanism involves the migration of only one element. Recent studies of Jupiter’s global oscillations show that this is not occurring.5 They show that even in the most optimistic scenario, only 30% of the helium is stratified into the planet’s interior.2 This is far too little to contribute appreciably to the excess heat.

In order to preserve the billion-year age, Ouyed et al. have theorized that there are nuclear processes, in particular, deuterium-deuterium (D-D) fusion reactions, occurring in the interior of Jupiter.2 Deuterium is heavy hydrogen, or hydrogen with a nucleus containing one proton and one neutron. However, the present core temperature of Jupiter in ‘mature’ (billion-year) models is less than one-eighth of that needed to support D-D fusion. The reaction requires a temperature of 17 eV (electron volts) or ~160,000 K as compared to 2 eV in the mature Jupiter models.6 Only a young Jupiter, newly formed from the gravitational in-fall of gas, would have a core temperature hot enough to support this reaction. But a young Jupiter would not need a nuclear reaction to explain the excess energy problem, as we will see.

As well as having a high enough temperature for the nuclear reaction, we would have to have deuterium in the core at just the right time so that it could ignite. Ouyed et al. theorize that deuterium sank rapidly to the core after the planet accreted and formed a layer before the planet had time to cool off—all in just a few million years.2 Deuterium fusion, they say, would then maintain the same core temperature as a young Jupiter for a long time. This tells us that Jupiter still exhibits its primordial (original) core temperature! It has not changed for the alleged 4.5 billion years. In fact, they calculate that there should be enough deuterium in Jupiter (if it all collected in this layer) to burn for 100 billion years!

This scenario says the deuterium layer would have had to assemble itself at just the right time and just the right place to sustain Jupiter’s primordial core temperature. It requires a remarkable coincidence of amazingly precise conditions. The same incredible conditions would also have had to occur in Saturn, Uranus and Neptune so that they too could support nuclear reactions and maintain their primordial state for billions of years. It would be much simpler to hypothesize that the jovian planets are young! But the uniformitarian planetary geologist or astronomer would find that quite unacceptable. Jupiter’s age would only be 0.07% of the assumed 4.5 billion year age of the solar system. 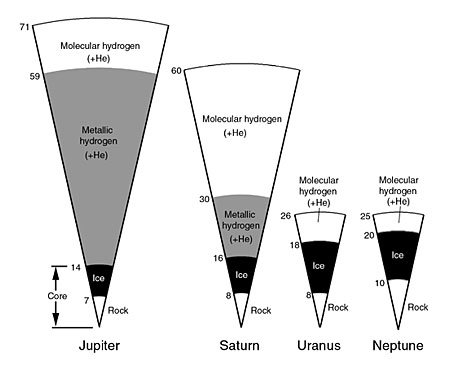 Simplified hypothetical internal structures of the four jovian planets (after Morrison et al.7). Hydrogen and helium are the primary constituents of Jupiter and Saturn, while compounds of carbon, nitrogen and oxygen comprise a large part of Uranus and Neptune. Radii are labeled in 1000-km units.

What is a star? Some would say any large self-gravitating gaseous sphere with a continued nuclear reaction in its core is a star. All other objects are either called brown dwarfs or planets. If we accept the notion put forth by Ouyed et al., then we would conclude that there are currently five stars in our solar system—five suns! The authors of this article admit that their model is ‘still debatable.’

So how do we explain the excess energy given off by the jovian planets? When God created these planets, the total energy they contained was the sum of the work He supplied plus any gravitational potential energy. The total energy of these processes was converted into heat and this is the source of the primordial energy. Uniformitarians postulate that the primordial energy was derived from accretion in the solar nebulae. Both models give the same result—the jovian planets were initially hot. It is only because the uniformitarian assumes the planets are billions of years old that he runs into problems.

However, once we accept that the jovian planets are young, the excess energy problem disappears. There is no need of a solution. Since the jovian planets have only recently been formed, they do not need nuclear processes to keep them hot for non-existent evolutionary aeons. Rather, they are only thousands of years old and have been hot since they were created.