A new-born island provides lessons about thngs that "look old."

Strolling along the sandy beaches of Tuluman Island (photo below), with its impressive cliffs in the background, is an eye-opener to all who have been brought up on “slow and gradual” thinking about rock formations.

The layering in some of the cliff faces would be enough to make most people immediately assume “millions of years.” However, neither these cliffs, nor the sandy beaches, nor the pebbles and boulders on the foreshore came from the usually-assumed long ages of geological processes. In fact, when the photo here was taken (between 1963 and 1968), the whole island was less than eight years old!

Tuluman Island lies south of Lou Island (between it and Baluan Island), which is about 30 km (19 miles) south of the east end of Manus Island. All these are in Papua New Guinea’s Admiralty Islands group, north of Australia. Just like Surtsey Island in the North Atlantic off Iceland,1 Tuluman also formed suddenly and catastrophically, from a volcanic eruption in 1960–61. 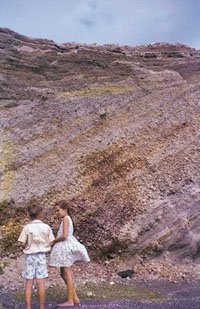 The information and photos (available in the magazine) were provided by Lester Hawkes, an Australian who was an Adventist missionary at the time. When he visited the locality in 1963, the island was in two distinct parts, one sandy, the other a small rocky outcrop, on either side of the still active volcano. The photo shows the “white water” caused by rising gases as the boat sails between the two sections.

Lester says, “The sea water was so hot here, that we had to move through quickly, without stopping, to prevent the boat engine (cooled by seawater) from overheating. Not too many people have had the opportunity to sail a boat through the crater of an active volcano.”

Even then, shortly after its birth, Tuluman Island clearly looked “old” to those who were unaware of its catastrophic history. It is useful in helping people more tangibly grasp how various geological features can form in a short time, given the sorts of cataclysmic forces (both hydraulic/sedimentary and volcanic) associated with Noah’s worldwide Flood. The millions of years beloved by the scoffers and Bible skeptics are not required.

It would be interesting to photograph aspects of the island now that some thirty years have passed since the photo shown here was taken. It is likely that the island would look even more geologically “mature” than shown here, and it would be interesting to check on the extent of biological colonization. This might help us understand how the world recovered after the Flood. Readers possibly able to help in this matter please contact us.