The margin of the Laurentide Ice Sheet in North America was generally composed of lobes, possibly as the result of rapid movement or surges to the south. The Des Moines Lobe (DML) was the largest of several lobes that extended into the mid-continental region of the USA. The DML, determined by mapping lateral and end moraines, was up to 250 km wide and covered more than 100,000 km2 in southern Minnesota and north-central Iowa.

Reconstructions of the surface morphology of the DML at its maximum, assuming that the thickness of the ice at the edge was as high as the horseshoe-bounding moraine, have indicated that the DML was probably thin and gently sloping.1,2 Such measurements have produced a puzzle for glaciologists. The basal shear stress, which depends upon the weight of ice and the sine of the surface slope, is calculated to be very low—about 10 times smaller than values considered typical for glaciers.3 Thus, the driving force to move the lobe southward was very low. On the other hand, dating methods, mainly the carbon-14 method, imply that the DML moved southward at a rate of about 1,700 m/yr, which is a high velocity for a glacier. There is something wrong with either the inferred ice lobe reconstruction or the radiometric dates or both. 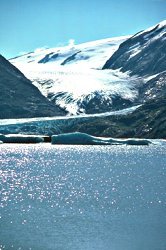 Ice sheet at the end of a modern glacier.

Since radiometric dates are held in high esteem, it is the lobe reconstruction that was challenged by a recent article on the DML by Thomas Hooyer and Neal Iverson.4 The authors stated that there are sources of error in past ice lobe reconstructions. They claimed that the ice at the edge of the bounding moraine of the DML might have been two to three times higher than previously estimated because the moraine could have been ice-cored.5 However, even an ice lobe 3 times thicker, with a greater southerly surface slope, is still not enough to drive the lobe southward at the velocity indicated by uniformitarian dating methods.6 Furthermore, evidence from existing ice sheets in Antarctica and Greenland indicates that the marginal ice is fairly clean. It is mainly valley glaciers that have much debris, mixed with ice, at the margin. Thus, ice-cored moraines are not expected in the Laurentide Ice Sheet.

The authors also considered the effect of increased pore pressure in the underlying basal till,7 potentially increasing the speed. An increase in pore water pressure beneath the ice would decrease the friction (shear resistance), as a large portion of the overlying weight is carried by the water pressure.8 Over time, this excess pore pressure should dissipate and the clayey till would consolidate.9

However, consolidation measurements of tills in Iowa and Minnesota indicate that the pressure of the glacier on its bed was only about 12% to 30% of what they expected, based on their revised, thicker ice lobe. Such consolidation tests are consistent with previous measurements for the DML and similar to tests conducted for other glacial lobes that indicate thin ice at the margin of the Laurentide Ice Sheet.10

The authors concluded that the weight of the glacier must have been buoyed up by a high pore-water pressure, which presumably dissipated before the till could consolidate. This seems highly unlikely, as full consolidation should occur within a few years, depending on the thickness of the clay layers. If the tills were not fully consolidated, then there should be a measurable variation of consolidation in the till layer, with portions closer to a drainage layer11 showing greater consolidation.

This reinterpretation of the DML morphology seems to be a speculative exercise, with little if any physical evidence to backup the revision. However, there is geomorphological evidence that the ice at the edge of the Laurentide Ice Sheet was quite thin. For instance, the height of hills that were never glaciated, from Montana, southern Alberta and southern Saskatchewan, reinforces the deduction of a thin ice sheet edge. These nunataks12 include the top 100 m of the western Cypress Hills of southeastern Alberta, Canada; the tops of the Sweetgrass Hills in north-central Montana, and the driftless area of the Wood Mountain Plateau of south-central Saskatchewan and the adjacent Flaxville Plateau in northeastern Montana.13

The Wood Mountain and Flaxville Plateaus are only about 100 m above the surrounding plains, indicating a limited ice thickness. The nunatak data matches the consolidation measurements and the morphological deductions based on the height of moraines (assuming no ice-core). The weight of evidence suggests that the lobes at the edge of the Laurentide Ice Sheet in the north-central United States were thin. Given the limited weight of ice, and thus small lateral driving forces, the glaciers would not have moved a great distance from the north.

The data also indicate that the standard dating methods used in glacial reconstructions, especially carbon-14, are questionable. It is possible that, if the carbon-14 measurements are not contaminated or in error by some other mechanism, the inferred relatively fast glacial flow rate would be even faster in the creationist model, since carbon-14 dates can be telescoped to within the time of the Flood using different initial conditions.14 Much faster glacier flow rates at the periphery would support the idea of surges, as suggested below.

A thinner edge for the Laurentide Ice Sheet supports the creationist model of the Ice Age in which the ice sheets grew more or less in place.15 They did not have to move down from northern Canada.

The lobed nature of the ice margin probably indicates surges.16 A glacial surge is an increase in velocity of about 10 to 100 times the normal velocity.17 Surges are probably related to an increase in basal water, which would be more likely in a rapid climatic warming during the deglaciation phase of the post-Flood rapid Ice Age. A surge will produce a thinner margin, which may partially explain the inferred low marginal profiles. Thin ice sheet margins, coupled with the multidomed ice sheet model, now in vogue from evidence in central Canada, indicate that the ice volume would have been significantly less than the long-age estimates and in agreement with the rapid post-Flood Ice Age model.18

Long-age ice thicknesses and volumes are based mainly on the assumptions that the ice sheet moved down from northern Canada and had a profile similar to those in Antarctica. Both of these assumptions seem unreasonable.