Answers.tv, available now, is a state-of-the-art video streaming platform that initially offers over 1,000 videos and live programming, available virtually anywhere in the world.

During the coronavirus pandemic and the temporary shutdown of the Answers in Genesis attractions, the Ark Encounter and Creation Museum, AiG has accelerated the launch of a video streaming service. Answers.tv, available now, is a state-of-the-art video streaming platform that initially offers over 1,000 videos and live programming, available virtually anywhere in the world. People waiting out the coronavirus and then into the future now have another on-demand media option to consider.

Ken Ham, CEO of AiG, remarked: “Using the help of a supporter who is at the cutting edge of video streaming, we were able to launch earlier than expected and less expensively than originally anticipated. In fact, the creation of the platform and the loading of 1,000 videos were done in a remarkable four weeks, during the coronavirus shutdown itself. We’ll tackle tough topics such as social issues, science, Christian doctrine, questions like why God allows disease and death, and more.” 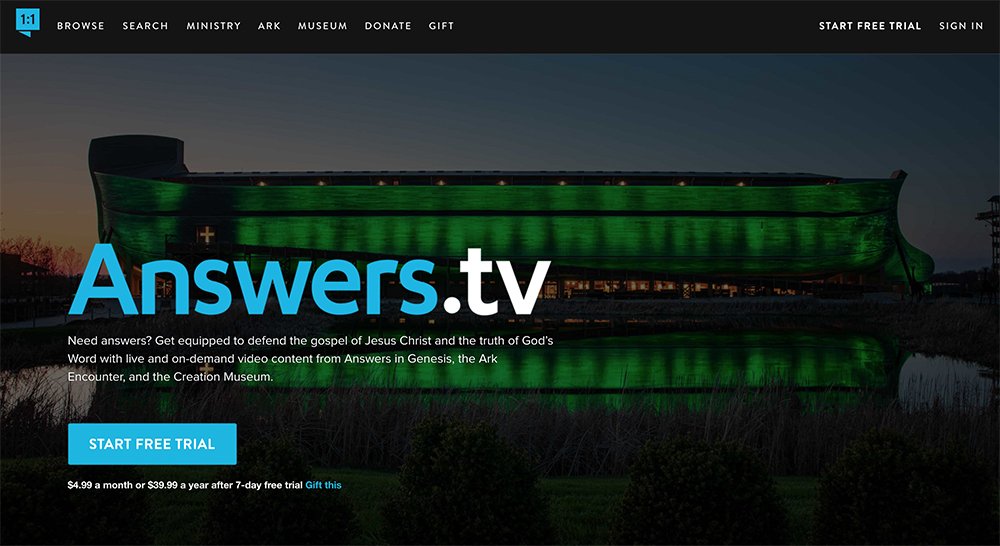 
Ham, who will have several of his own video presentations available on the video platform, added: “Though these are very difficult times in the world, the timing of the release of Answers.tv enables us to reach many more people who are sheltered in place during the coronavirus. Of course, when things return to normal, people will still be seeking answers to life’s perplexing questions and Answers.tv will be there for them. So even as our attractions are temporarily closed, we can continue to present biblical truths and then into the future when the virus is behind us.”

AiG has developed a large team of speakers that include scientists, theologians, and workshop leaders who have produced over 1,000 videos, including documentaries.

AiG has developed a large team of speakers that include scientists, theologians, and workshop leaders who have produced over 1,000 videos, including documentaries. Special live streaming events, many at no extra charge, will be exclusives of Answers.tv. They include concerts, lectures, wildlife programs, and current affairs programming. The Answers News show will be a regular feature as it offers comment on the news that touches on the Bible’s authority, science, and social issues that the Bible can address. Answers.tv will also produce special science documentaries, animal shows featuring AiG’s enthusiastic zoo staff, and other programs. AiG’s observatory, planetarium, and laboratory classes will also be the setting for many special programs, in addition to the Ark and Creation Museum.

To help with the expense of creating this ambitious new outreach, the AiG supporter is also deferring some of the costs so that Answers.tv could launch now. Also, Ray Comfort’s ministry of Living Waters has contributed several videos on a variety of topics, including many of the hot-button issues of the day. 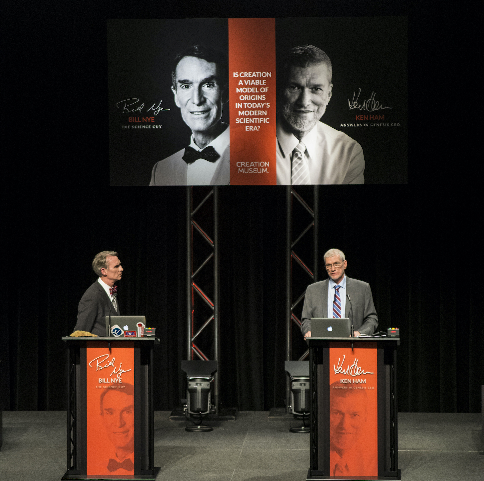 The famous Bill Nye/Ken Ham debate, viewed by over 20 million people the week it aired, can be watched on Answers.tv.


Ham observed: “This wonderful streaming technology has been used by the secular world with such platforms like Netflix, Disney+, and Amazon’s Prime Video. But I’ve been dismayed that they are often being used to push violence and social agendas that run contrary to Scripture. We also have seen increasing censorship of Christian videos and teaching by social media giants. It was time for us to act.”

In any country, viewers of Answers.tv will be billed through their credit card in their own currency. Several dozen Spanish-language videos have already been loaded to the video streaming platform and many more are planned. Many programs in both English and Spanish deal with science, creation vs. evolution, Bible doctrines, kid-relevant content, and much more. Some of the videos deal with pressing global social issues like racism. In fact, videos by AiG’s PhD biologists and other researchers share, at a layperson level, that all people descend from Adam and actually have the same skin color: different shades of brown.

Answers.tv has made it easy to make gift subscriptions to people wherever they are in the world.

Answers.tv has made it easy to make gift subscriptions to people wherever they are in the world. A yearly subscription is $39.99 US (just over $3 per month). A one-week trial is available for free.

Initially, Answers.tv will be web-based in order to get launched quickly. It can be accessed on any device, including smart phones, computers, and tablets. This summer, Answers.tv will feature a custom mobile app to be available through Apple, Google, Roku, etc., as another way to access what Answers.tv has to offer. No television provider is needed to watch Answers.tv.

Answers in Genesis is an apologetics (i.e., Bible-defending) ministry based in northern Kentucky. The Ark Encounter opened in 2016 and features a 510-foot-long Noah’s ark. West of the Cincinnati Airport and next to the AiG headquarters, the Creation Museum has welcomed well over 4 million visitors and has also become a major family attraction in America. Both await the state’s decision as to when tourist attractions can re-open.