In a case closely monitored by religious-freedom watchers across America, geologist Dr. Andrew Snelling has finally received the research permits he had requested in 2013 from the Grand Canyon National Park to continue his field work inside the canyon.

Dr. Snelling’s attorneys at Alliance Defending Freedom (ADF) had uncovered evidence that the PhD geologist’s permits had been denied because of his religious and creationist beliefs. When evidence came to light that Dr. Snelling’s rights were being unconstitutionally denied, the Grand Canyon National Park and the Department of Interior changed course and issued the permits.

When evidence came to light that Dr. Snelling’s rights were being unconstitutionally denied, the Grand Canyon National Park and the Department of Interior changed course and issued the permits.

A letter to ADF attorneys from the park’s superintendent admitted the validity of Dr. Snelling’s proposed research: “The GRCA Research Permits program notes that Dr. Snelling's proposal is well-stated with methods that are similar or equal to standard scientific practice to test the hypothesis provided.”

As a result, ADF voluntarily dismissed Snelling v. United States Department of Interior in federal court today. The park, via its attorneys, has issued both a research permit and a raft-launch research permit for on-site work in the canyon. Dr. Snelling’s next research project will occur later this summer.

Dr. Snelling declared, “I am gratified that the Grand Canyon Research staff have recognized the quality and integrity of my proposed research project and issued the desired research permits so that I can collect rock samples in the Park, perform the planned testing of them, and openly report the results for the benefit of all.” 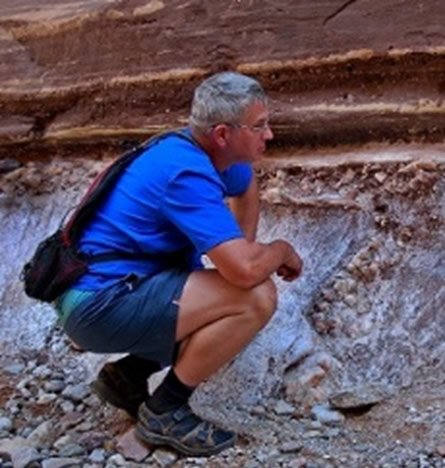 Dr. Andrew Snelling on a recent trip inside the Grand Canyon.

Ken Ham, president and CEO of Answers in Genesis, which employs Dr. Snelling, remarked that “my colleague was only asking for equal access to the canyon.” He added, “I trust that government officials and secular activists will think twice now before attempting to infringe on the religious liberty of Christians who are creationists and qualified scientists. I am very thankful for the work of the excellent attorneys at ADF for standing up for a scientist’s religious beliefs. More than ever, we need to be upholding the First Amendment’s guarantee of the freedom to express religious beliefs.”

ADF had argued that the civil liberties of Dr. Snelling had been violated when he was twice denied a permit by Grand Canyon National Park to continue his research due to his religious and scientific views.

“When the government refuses to allow a Christian geologist simply to collect information because it dislikes his views, it undercuts science and violates the law,” said ADF Senior Counsel Gary McCaleb, co-counsel for Snelling. “We commend Park Service officials, Interior Secretary Zinke, and the Trump administration for understanding that specifically targeting Dr. Snelling’s faith as the reason to stop his research was both inappropriate and unconstitutional.”

Michael Kitchen, lead counsel for Snelling and an attorney allied with ADF, added, “This settlement benefits everyone, in that it sends the message that the government will not interfere with basic scientific inquiry by blocking access to data based on a researcher’s religious faith.”

When public records’ requests revealed that National Park officials were overtly discriminating against Snelling’s faith, ADF attorneys and Congressman Trent Franks, R-Ariz., made additional requests for the research permit to be issued. After the Park Service failed to respond in a timely manner, Snelling filed suit in the US District Court for the District of Arizona.

Dr. Snelling has an impressive academic background, which includes publishing many articles in peer-reviewed mainstream geology journals, earning a doctorate in geology from the University of Sydney (ranked in the top 100 universities throughout the world), and conducting substantial field and laboratory experience relating to geological research. Over the years, Dr. Snelling has successfully completed three prior research projects at the canyon. As a trained professional geologist, he respects the regulations of national parks, such as not disturbing sensitive environmental areas and recreational activities.

Dr. Snelling will be gathering samples at folds inside the canyon where all the layers were bent.

Dr. Snelling’s proposed research will examine the idea that is heavily promoted inside the Park: namely, that the canyon's strata were formed over millions of years. With his newly issued permits, Dr. Snelling will be gathering samples at folds inside the canyon where all the layers were bent, but Dr. Snelling suspects that the layers were not shattered because the rocks were still soft as they folded. In the evolution scenario, these rocks must have supposedly remained soft for 450 million years.

Dr. Snelling noted, “We expect debate about what the evidence means. In my lawsuit, I had merely been asking for fairness.”

Alliance Defending Freedom is an alliance-building, nonprofit legal organization that advocates for the right of people to freely live out their faith. Its attorneys offered their services to Dr. Snelling pro bono. Answers in Genesis is an apologetics organization based in Northern Kentucky, near Cincinnati. See the respective websites of www.ADFLegal.org and AnswersInGenesis.org.