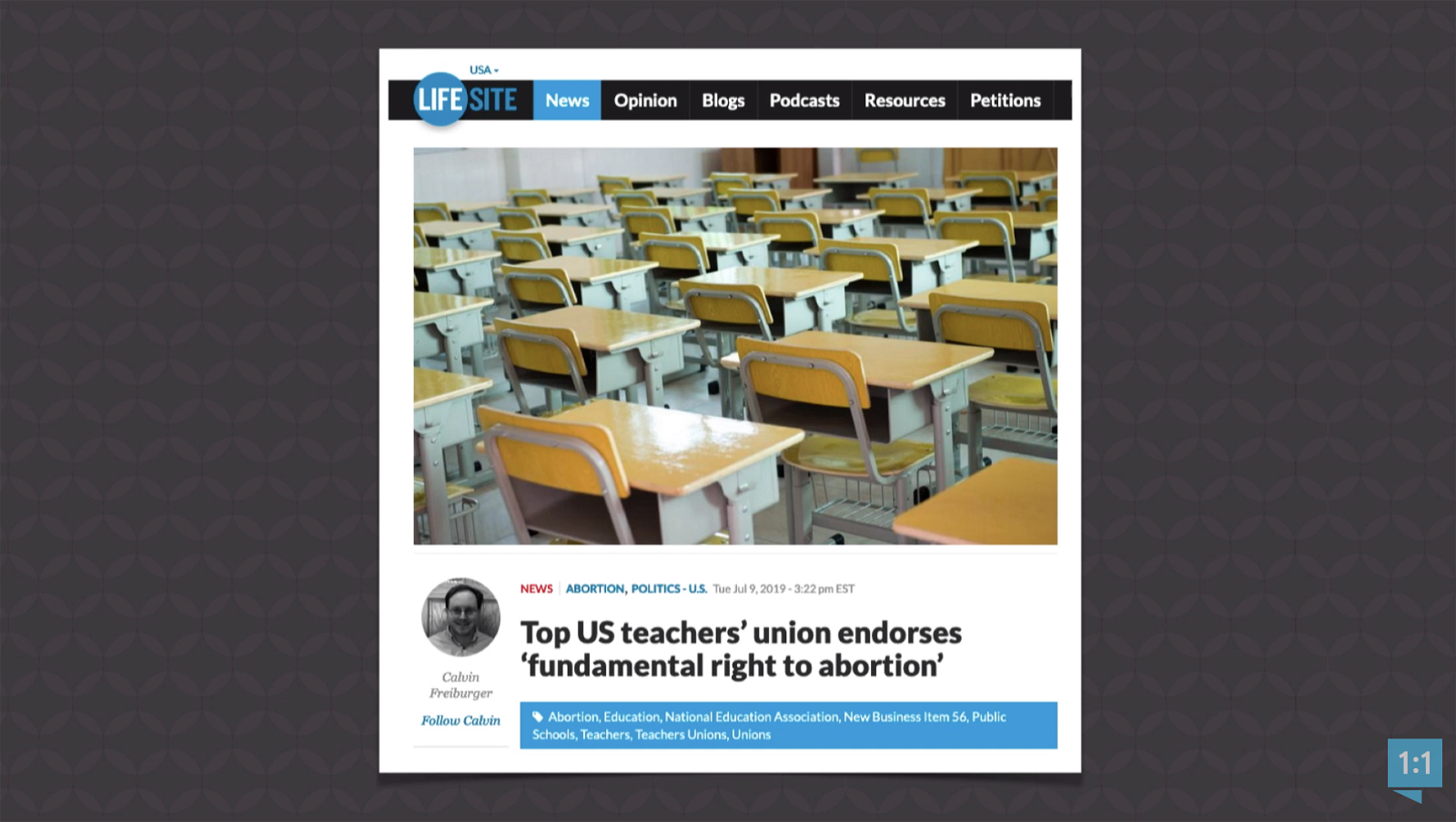 At its annual representative assembly earlier this month, the National Education Association (NEA) formally adopted a statement that endorses abortion. The NEA is the largest teachers’ union in the US. It’s tragically ironic that an organization that is supposed to support those who will teach the next generation of students endorses killing off the next generation of babies before they are born!

The NEA declared that they will now

include an assertion of our defense of a person's right to control their own body, especially for women, youth, and sexually marginalized people. The NEA vigorously opposes all attacks on the right to choose and stands on the fundamental right to abortion under Roe v. Wade (emphasis added).

Of course, they don’t really support the right of a person to control their own body, because they support abortion!

Of course, they don’t really support the right of a person to control their own body, because they support abortion! Abortion is the ultimate violation of a person’s rights as a unique individual. A person—made fearfully and wonderfully in God’s own image—is killed in every abortion. A fertilized egg is not part of a women’s body—this is a unique individual with information (DNA) from both male and female.

Predictably, the NEA calls those who are pro-life “misogynistic forces.” That’s what many secularists seem to do: when they don’t agree with what someone does or believes, they stoop to name-calling. If someone is against the murdering of unborn children, secularists will say pro-lifers are obviously misogynistic, meaning they hate women. But pro-lifers love women and their unborn children!

The NEA adds that those in the pro-life movement “want to abolish the gains of the women’s right[s] movement” and that “women's leadership is essential for any successful egalitarian movement and therefore must be protected.” But no one is trying to strip away a woman’s ability to be in leadership! What the NEA really seems to be saying is that women can’t be leaders and mothers at the same time. And that certainly isn’t an empowering message to women!

As Christians, and despite the insults thrown at us, we need to continue to stand for life, defending those who cannot defend themselves.

Abortion activists throw around insults and misinformation to avoid and disguise the truth—they are in favor of the killing of millions of unborn children. As Christians, and despite the insults thrown at us, we need to continue to stand for life, defending those who cannot defend themselves.

By the way, unsurprisingly, the NEA has also supported various far-left groups, including Planned Parenthood, the Women’s March, ACLU, Sexuality Information and Education Council, etc. These groups represent the positions this public-school teachers’ union wants students in public schools to be taught and to hold!

Several of our staff members attended the NEA convention earlier this month in Houston, Texas, to be part of hosting a booth in the expo hall and handing out various AiG resources to teachers and other educators at the convention. Their goal was to equip Christian teachers in public schools to help them defend their faith and to challenge unbelievers with the gospel. It’s a dark place, but every year (for the past twenty years) we are there to be a light.


One of our AiG speakers, Bryan Osborne, attended the convention with his family (fourth picture above). He said a spirit of rebellion and the idea of “we won’t take this anymore” was everywhere in the expo hall, in the imagery (such as the closed, raised fist) that was on display, and in many of the presentations given. Bryan also shared that socialist, Marxist philosophy—stemming from a secular, evolutionary worldview—permeated the convention. The NEA is largely very hostile to God’s Word and the gospel.


We’re thankful for the generous supporters who make this annual NEA outreach possible. In such a dark place, the light of the gospel shines brightly.

I discussed this item today on Answers News with cohosts Bryan Osborne and Bodie Hodge. Answers News is our weekly news program filmed live before a studio audience here at the Creation Museum and broadcast on my Facebook page and the Answers in Genesis Facebook page. We also covered the following topics: