Want to Live? Canada Will Help You Die Instead 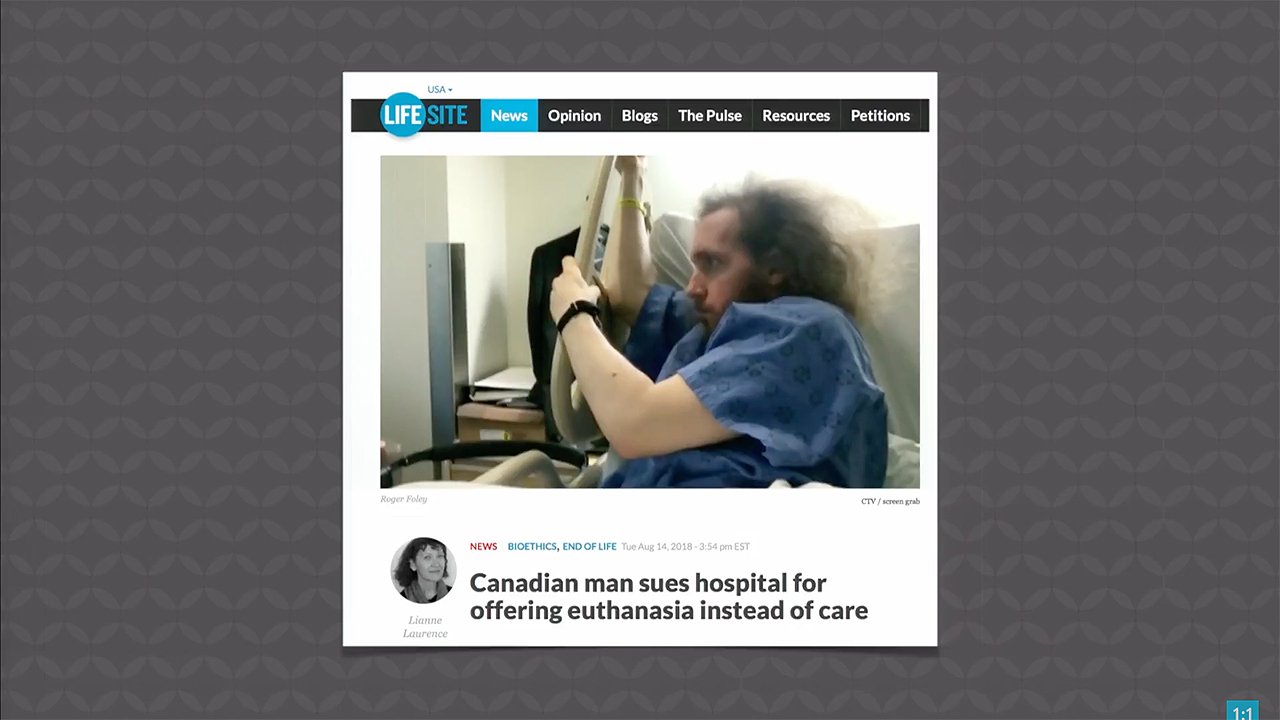 A Canadian man, Roger Foley, with a degenerative brain condition is suing a hospital, two healthcare agencies, and both the Ontario and Canadian governments for denying his right to “assisted life.” Foley claims health officials have “refused his request to live at home and be in charge of directing his own care.” Instead, he’s been offered euthanasia—doctor-assisted suicide (or, really, doctor-assisted murder!)—on more than one occasion.

Foley says he does not want his life ended but, rather, would like to be able to go home from the hospital and direct his care from there. But, rather than being supported in this decision, he claims health officials have been negligent in his care and have suggested he choose the cheaper option (yes, money was even specifically mentioned at one point)—euthanasia!

While euthanasia advocates have assured us over the years that abuses like this won’t happen, they apparently do and will only continue to occur as our western culture embraces death rather than life. Increasingly our culture is placing a value on human life that’s contingent on health, level of ability, or level of dependency. Those who are old, infirm, terminally ill, unborn, or disabled are increasingly seen as having no value, so they may as well die and relieve the burden they allegedly cause to their caregivers and the economy.

We have unique value because we’re image bearers of the Creator.

The Bible presents quite the opposite view. In a biblical worldview, we’re created in the very image of God (Genesis 1:27). We have unique value and worth not because of our abilities, level of dependency, health, or any other subjective standard. We have unique value because we’re image bearers of the Creator. And taking the life of an image bearer is murder—and it’s serious. God loves us so much he stepped into history to pay the price for our sin so we can be reconciled to God. That gift of salvation is of infinite value!

The biblical worldview is life-affirming—for every human life.

This item was discussed today on Answers News with regular cohosts Bodie Hodge and Dr. Georgia Purdom and guest Bryan Osborne, AiG’s curriculum specialist. Answers News is our twice-weekly news program filmed live before a studio audience here at the Creation Museum and broadcast on my Facebook page and the Answers in Genesis Facebook page. We also discussed the following intriguing topics:

Watch the entire episode of Answers News for August 23, 2018.