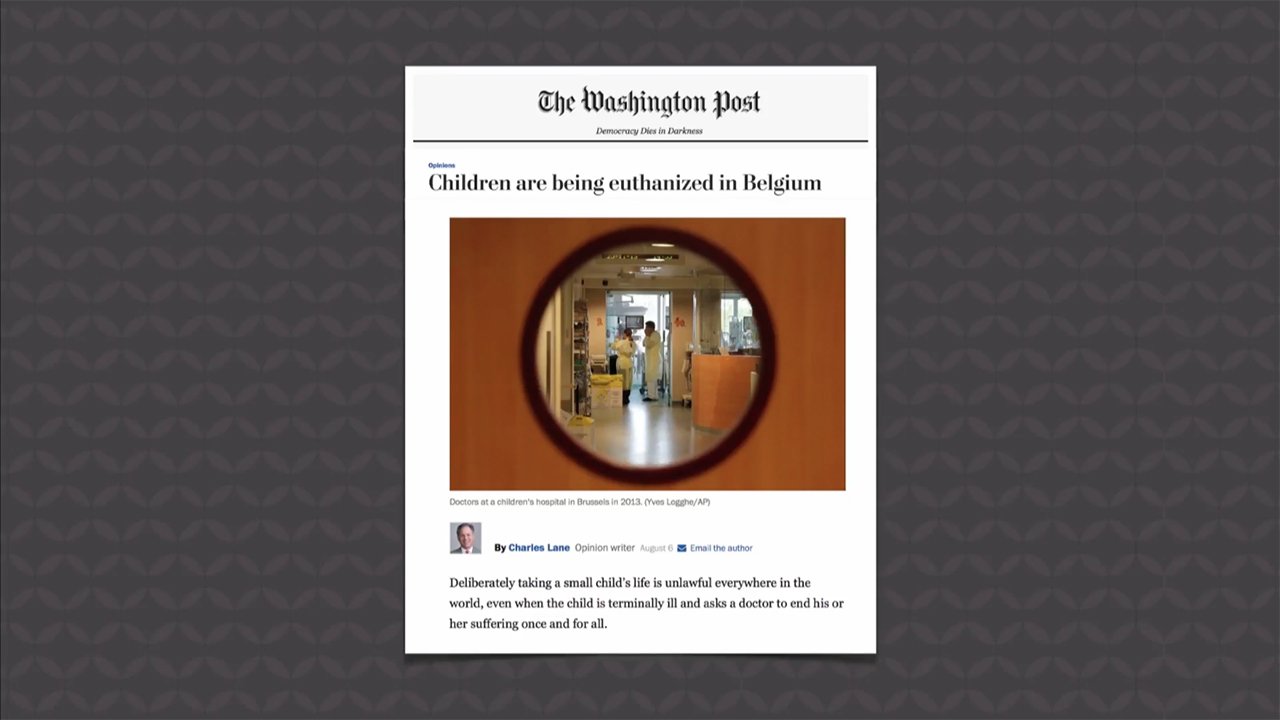 The European country of Belgium has some of the most permissive laws regarding euthanasia of any nation in the world. Euthanasia, also known as “doctor assisted suicide,” is the idea that a terminally ill patient (or, in some cases, just the very old, or those with predicted shortened life-span because of a sickness) can choose to end their own life, with the assistance of a doctor. And Belgium now allows children of any age to choose euthanasia.

In two years, three children (ages 17, 11, and 9) chose euthanasia. One child had cystic fibrosis, another had muscular dystrophy, and the other had a brain tumor. (Over 4,000 Belgian adults, most of whom had cancer, chose euthanasia that year as well.) Doctors decided there was no hope for these children or reason for them to continue living, so their lives were ended at their request. Imagine if famed scientist Stephen Hawking had requested euthanasia when he first heard a diagnosis of his disease—yes, he struggled for many years, but wrote many books and became a very famous (though secular) scientist.

We are living in a day and age when human life has increasingly little value, especially if that person is suffering.

We are living in a day and age when human life has increasingly little value, especially if that person is suffering. The value of a life is now defined by perceived quality of life and health (including mental health—patients in Belgium, and elsewhere, have been euthanized for poor “mental health”). This slippery slope downwards will only continue as our world ignores God’s Word and its teaching about the sanctity of human life.

You see, every human life has unique value and dignity simply because we’re created in the image of God (Genesis 1:27). We aren’t just animals, and our lives have infinitely more value than any animal because we alone are image-bearers of the Creator. We have been commanded not to murder (Exodus 20:13) and that’s what euthanasia is—murder, dressed up as “compassion.” Christians must not fall into this pattern of thinking but, instead, should think according to God’s Word and what it teaches about life and death.

Is Taking a Child’s Life Unlawful Throughout the World?

Interestingly, the author of the opinion piece in The Washington Post reporting on this story, who seems to be against euthanasia (at least for children), begins his commentary with this statement:

Deliberately taking a small child’s life is unlawful everywhere in the world.

This is utterly untrue. It’s been reported that currently only four of the world’s 195 countries make the deliberate taking of a child’s life unlawful with no exceptions. Every other country allows for abortion, at least in some form, though 39 only allow an exception for the life of the mother. And abortion is the deliberate taking of a human life—just as euthanasia is. While this author appears to properly recognize the danger and horror of allowing euthanasia for children outside the womb, he overlooks the equally horrific practice of the murder of unborn children, known as abortion. Those of us who know Christ have a responsibility to stand up for life and be against euthanasia, abortion, and other evils that end the life of a human being made in the very image of God. Ultimately, we don’t hold the power of life and death. God does, and we should not try to play God, choosing who lives and who dies. Instead we must boldly stand for every human life regardless of age, disability, illness, or stage of development.

I discussed this item today on Answers News with regular cohost Bodie Hodge and frequent guest Avery Foley. Answers News is our twice-weekly news program filmed live before a studio audience here at the Creation Museum and broadcast on my Facebook page and the Answers in Genesis Facebook page. We also discussed the following fascinating and alarming topics:
Watch the video on YouTube.

Watch the entire episode of Answers News for August 16, 2018.